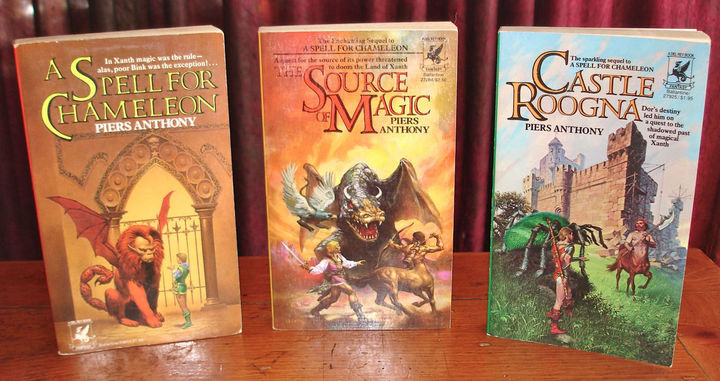 Black Gate had 1.26 million page views last month, very nearly a record. Much of that bump in traffic was due to a series of very popular posts. Derek Kunsken has long been one of our most popular bloggers — his interview with Christopher Golden was our third most popular article in October, and last month his piece on Rebirth: DC’s corrective reboot was #5. But he thoroughly dominated the charts in July, claiming both the #2 slot, with his look back at Marvel’s Star-Lord, and the top spot, with his examination of the soaked-in misogyny of Piers Anthony’s famed Xanth series. Remember to leave room for the rest of us, Derek!

Bob Byrne was #3 on the list, with the second half of his two-part history of Necromancer and Frog God Games. Nick Ozment had our second most popular comic article in July, claiming the fourth spot on the list with his retrospective of Kurt Busiek’s Astro City. Rounding out the Top Five was our look at Chaosium’s classic Runequest campaign Borderlands.

The complete list of Top Articles for July follows. Below that, I’ve also broken out the most popular overall articles, online fiction, and blog categories for the month.

The Top 50 Black Gate posts in July were:

There were plenty of older articles popular last month as well. The 25 most popular blog posts written before July were:

The Top 5o Black Gate blog posts in June are here, and you can see all 101 posts we made in the month of July here.

John, Joe the-one-and-only Bonadonna, Fletcher: Fellows, we are deeply whelmed by this month’s standings. Most gratifying is to see writers such as Andrew P. Weston and Michael A. Armstrong, along with the damnedest writers of the Heroes in Hell universe, all attracting interest and, we hope, new readers. And thanks again, John, for creating a place where fantastical books of all sorts can be seen, and read, and find new friends.

You’re very welcome! And it’s quite a sight to see the Perseid Press books virtually take over our list of popular older articles. Leave some space for lesser books. 🙂

But whatever you do, keep the great books coming!

John, we have slowed down a bit, which means we’ve many wonderful books yet to come, including a novel by Thomas Barczak, Mouth of the Dragon, and one by Walter Rhein, the Literate Thief, as well as the long-awaited Pirates in Hell, followed by a new Hell novel from Andrew P. Weston, and the third in The IX trilogy. And of course our aggressive re-issue program continues, bringing books we love to the digital age. And of course we look hard at what Black Gate is doing, every month, and can only wonder how in the world you manage so much more than we can. Life and glory to you…

Thank you, Janet. And congratulations to one and all!