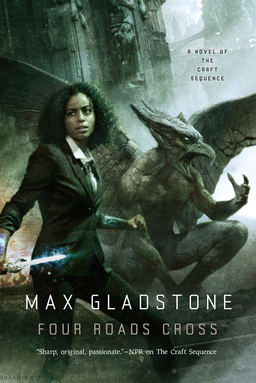 The great city of Alt Coulumb is in crisis. The moon goddess Seril, long thought dead, is back – and the people of Alt Coulumb aren’t happy. Protests rock the city, and Kos Everburning’s creditors attempt a hostile takeover of the fire god’s church. Tara Abernathy, the god’s in-house Craftswoman, must defend the church against the world’s fiercest necromantic firm–and against her old classmate, a rising star in the Craftwork world.

As if that weren’t enough, Cat and Raz, supporting characters from Three Parts Dead, are back too, fighting monster pirates; skeleton kings drink frozen cocktails, defying several principles of anatomy; jails, hospitals, and temples are broken into and out of; choirs of flame sing over Alt Coulumb; demons pose significant problems; a farmers’ market proves more important to world affairs than seems likely; doctors of theology strike back; Monk-Technician Abelard performs several miracles; The Rats! play Walsh’s Place; and dragons give almost-helpful counsel.

We covered all four previous novels — which, as Max explains on his blog, are ordered not by publication date, but by title:

Here they are in correct sequence.