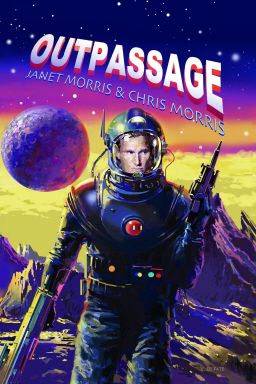 You only live once.

That is not only the theme of this excellent science fiction novel — it is also at the very heart of the novel’s story premise. Once again, I continue with my reviews of my favorite novels by Janet Morris and Chris Morris. But how I ever missed Outpassage when it was first published in 1988 I cannot say, because this is exactly the type of science fiction story I grew up reading in the pages of Amazing Stories and The Magazine of Fantasy and Science Fiction. So this is the first time I’ve had the pleasure to read this great science fiction adventure.

Outpassage is action-packed, character-driven, and thought-provoking. The science is grounded in reality, but isn’t integral to the plot, and the tech never gets in the way of story and character: there is no garbage science or techno babble to muddle the plot. While this story has the feel of an old-fashioned, traditional science fiction novel from back in the day, it has a hip and modern sensibility to it. The characters are vivid and memorable, and the lean prose style is perfectly suited to the story. The dialogue is perfectly matched to each character — crisp and sharp, and very smart, with a fine balance of humor and gravitas.

Outpassage moves along like a starship going warp factor seven, with twists and surprises nearly every step of the way. And that wrap-around cover — wow! Fully captures the tone of the novel, and is a loving homage to classic SF covers. Once again, “fantasy’s power couple,” as one reviewer recently dubbed them, delivers a fine and rousing tale filled with mystery, espionage, religion, politics, and corporate shenanigans.

It begins on an outer space mining colony called X-31A, where a special forces Ranger Dennis “Det” Cox and his team are called in to “eradicate” a problem and clean up a mess. But the mission turns into a disaster, and Cox isn’t quite sure whether or not he saw signs of an alien presence on the piece of intergalactic real estate. Once he’s back home on earth and debriefed, Cox meets up with a woman named Paige Barnett, whom he was matched with on an internet dating site called Dream Date. Paige, however, is the Girl Friday to the top dog of a corporation called IST, who has their hands in terraforming, mining, and a few illegal activities, as well.

Well, as blind dates often go, this one goes horribly wrong: both Cox and Paige are shanghaied and are then separated. She is thrown into a labor group on another mining colony called X-66B, where she falls in with a group of rebel workers. Cox, however, has been nabbed for a paramilitary mission to find real evidence of an alien presence, and to target the rebel base of union-organizing workers — on the very same X-66B. 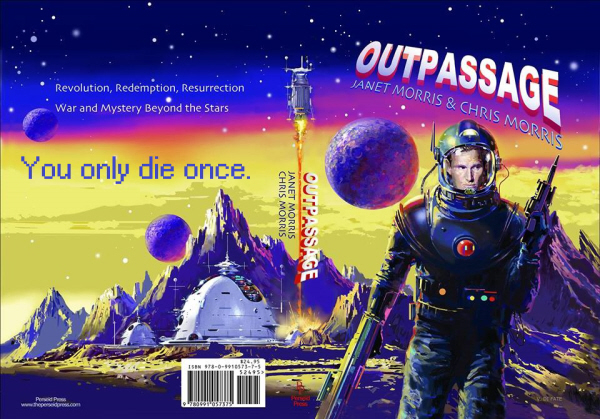 During one sortie, Cox once again catches a glimpse of a ghostly alien hand, just as he did on X-31A. His team also discovers a rock sample that may or may not be a genuine alien artifact. A character named Locke, who may or may not be on Cox’s side, and may or may not have an agenda all his own says at one point, about “black ops” agents and their mission:

I’m just saying that those black operators who briefed us up there and gave us every little thing we asked for… they want any alien life or evidence of alien life eradicated. You think bringing this piece of stone over here fits that description?

And then that rock sample is somehow mysteriously pulverized, quite by accident, or so Cox is later told.

Meanwhile, Paige gets herself more deeply involved with the revolutionaries, and takes part in a ritual that so totally blows her mind, she starts to question everything she knows about IST, the CEO she is secretly in love with, and IST’s mission statement: about life, death, and her own place in the universe. Integral to all this is a black co-worker, a powerful presence of a man named Freedom Ayoub — “the man who had been dead.” He becomes Paige’s self-appointed protector and guru, and it’s mostly from him that she learns about Redemption, Resurrection, and the Holy Way. This philosophy, this cult is at the heart of what happened on the X-31A mining colony, and the ghostly alien hand Cox first sees there and then again on X-66B. This new religion is also the very heart of the workers’ revolution: what it is, what it means to Cox, Paige, Freedom, Mankind, and the very nature of existence is also the foundation upon which this wonderful science fiction novel is built. To say more on this new religion and the ultimate truth it contains would be to give away too many spoilers.

When Cox receives a transcript from one of his men — a message calling for help from a woman claiming to be Paige Barnett, he sets out to search for her. The fact that they were shanghaied together while on their dream date, the fact that she is the right-hand of the CEO of IST, and now her presence on X-66B convinces Cox that he isn’t crazy, that the presence of alien life is very real, but whether or not this presence is tied in with the labor movement and the growing religion of Redemption, Resurrection and the Holy Way remains to be seen. Cox needs Paige for validation, and goes to great lengths to find her. A female pilot named Frickey follows orders that get most of Cox’s Alpha and Beta teams killed — including Schultz, who was more than a teammate to her — and then sets out to make amends. She rejoins Cox and together they go search for Paige, while working to uncover the truth behind what is going on.

The last act of this intriguing story finds Cox left with the decision to obey a direct order to destroy X-66B, killing all those left behind, or to fake the destruction of X-66B, which would consign those same people to a long, slow and agonizing death. Will he find and rescue Paige? How and where does Freedom Ayoub play into all this? Can X-66B and all those left behind be saved? And what will Cox’s final decision be?

You’ll have to read Outpassage and find out for yourself. Many questions are answered, and then even more questions arise that need answers. This is thought-provoking science fiction, with the action and feel of a space opera, and with elements of mystery and espionage to keep us turning the page. And the characters ring true, jumping right off the page….

Paige Barnett is a thoroughly modern woman — a brilliant, tough, no-nonsense bureaucrat who rules in her corporate world, but find herself way out of her element when she’s shanghaied and taken to X-66B. Could this possibly have been a set-up to get her out of the way because she knows too much and has spoken out against IST’s corporate policy on what first happened on X-31A? What she sees, what she learns, and what happens to her brings her to a place of enlightenment she at first fears, and then accepts. What about Freedom Ayoub, the quiet, powerful and yet almost childlike “man who had been dead”? What’s his story? Why is he so integral to Paige, and why is she determined to see that he lives and is returned to Earth to tell all that he knows and all that he is? And then there’s Frickey, ace-pilot and rock-steady warrior who undergoes her own transformation during the course of this novel. Will she overcome her guilt and grief and help to bring home Cox, Paige and Ayoub?

But this is truly Dennis “Det” Cox’s story. A non-com and experienced warrior cut from the cloth of the Homeric ideal of a hero. He’s plain, blunt-spoken, and takes no bull from anyone; a real ground-pounder, a soldier who hates politics, but does his job and does it well. He’s the guy you want on your side, the guy on whose side you want to be. He faces decisions and moral dilemmas, as well as the heat of combat and the intrigues of corporate policy. But what revelations he is forced to see and accept are the hardest things he’s ever done. Enlightenment is there for him to grasp, but it disturbs him with its reality-changing truth, and he is left to face more decisions in a finale I did not see coming, but is perfect, nonetheless. For Cox, that moment arrives when he witnesses, when he touches and learns the truth behind the words… You Only Live Once.

Why this outstanding novel was overlooked for Nebula and Hugo awards is beyond me. When you combine a great story with flesh and blood characters, with plenty of action, and then toss into the mix the machinations of a powerful business conglomerate, paramilitary activity, corporate intrigue and espionage, politics, religion, and an undefined, possible alien presence…you have a novel that succeeds on many levels.

Outpassage was written by Janet Morris and Chris Morris, and originally published in paperback by Pageant Books in 1988. The Authors Cut Edition was published by Perseid Press in February 2014. It is 386 pages, priced at $24.95 in trade paperback.. Cover art, design and frontispiece by Vincent Di Fate.

[…] A Mining Colony, a Blind Date, and a Ghostly Alien Hand: A Review of Outpassage by Janet Morris &amp… […]