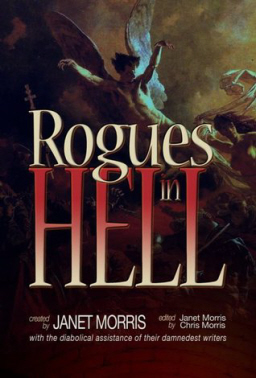 The most recent volume, the twelfth, was Lawyers in Hell (2011, co-edited with Chris Morris). And now, continuing with the series, she brings us Rogues in Hell, which IMHO is the best of the lot.

I love the whole concept behind the series, the cultures, inhabitants and levels of Hell. It’s quite a cool concept, and for writers this is a great place to let your imagination run wild. And I like the use of historical, legendary, and mythic characters.

My favorite of the 22 stories that comprise this anthology is “Colony,” by Bruce Durham. It’s a solid read: well-told, with great momentum to keep things moving and fun, crackling dialog, and prose that engages all the senses. Here, General James Wolfe has recently been resurrected — and once again finds himself in Hell, aboard a Satanic ship searching for an island not unlike Skull island.

The tale is told with plenty of action and humor, and never once breaks that magic spell that keeps you inside the story.

“Which Way I Fly,” by Janet Morris, is a very complex tale, and quite hard to describe. It’s a two-fold story, with Lysicles, an Athenian general, seeking revenge against Alexander of Macedon. With Lealaps the dog, guardian hound of Zeus, Lysicles joins with Xenophon the mercenary, and their demon allies in an epic battle in Hell.

The other part of this story involves Irkalla, Queen of Arali, and her son, Ninazu, who is of the winged Eshi, and is Prince of Ki-Gal. The plot revolves around the Royal House of Demons, and Erra and the Seven Sibitti, the sons of Heaven and Earth, the weapons of the gods who terrorize the dead. 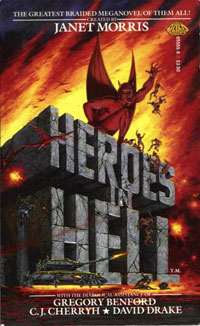 Another favorite of mine is “Babe in Hell,” by Janet and Chris Morris. Herein we find Shakespeare, Christopher Marlowe, Ben Franklin, Mary Shelly, Lord Byron, Perseus and Andromeda, Fallen Angels… all involved in the Hellfire Club’s Polo Tournament. There’s some great stuff here between all the characters, especially Shakespeare and Marlowe.

But wait, here’s the corker. The damned can’t reproduce in Hell. There are no babies in Hell, except for those that are damned. So, when a baby appears in Hell, all Hell breaks loose — if you’ll pardon the pun — and the fun really gets going when Mary Shelly and Andromeda start quarrelling over the baby: Hope.

Other stand-out stories are “Battle of Tartarus,” by Chris Morris, “Ragnarok & Roll,” by Larry Atchley, Jr, and “The Miraculous Roadside Attraction,” by Jack William Finley.

Overall, Rogues in Hell is an excellent collection of imaginative and wonderful stories in the grand tradition of Phillip Jose Farmer’s classic To Your Scattered Bodies Go. But now the setting and the stakes have been amped up to 10. Add this one to your collection. You’ll be revisiting these stories in the years to come.

The next volume, Dreamers in Hell, was just released on June 13. I hope to review that one right here on Black Gate this month.

Black Gate » Blog Archive » Giving the Devil His Due: A Review of Dreamers in Hell

Black Gate » Blog Archive » The Devil in the Details: A Review of Lawyers in Hell

[…] shared-universe series I’ve ever had the pleasure to read. Lawyers in Hell actually precedes Rogues in Hell and Dreamers in Hell, both of which I previously reviewed here. And like those other volumes, this […]

Poets in Hell on Black Gate: The Good, the Damned, and the Ugly truth about Poets in Hell… « sacredbander

[…] doubt know by now, I have previously reviewed the shared-universe anthologies Lawyers in Hell, Rogues in Hell and Dreamers in Hell, all edited by Janet Morris and Chris […]

Thank you, faithful Black Gate readers for enjoying my reviews!