I’m not intimately familiar with the work of Zenna Henderson…. but I know she is extremely highly regarded by those who are familiar with her, and that’s pretty telling.

She’s remembered today primarily for her stories of The People, an spacefaring alien race with strange metal powers that covertly settles in the American southwest after the destruction of their home planet. The stories appeared, like most of her short fiction, chiefly in The Magazine of Fantasy & Science Fiction; they were collected Pilgrimage: The Book Of The People (1961), People: No Different Flesh (1966), and in two omnibus volumes, The People Collection (1991) and the NESFA Press book Ingathering: The Complete People Stories (1995).

Much of her other short fiction was gathered in two handsome paperback collections: The Anything Box (1965) and Holding Wonder (1971). Her first published story was “Come On, Wagon!” in the December 1951 issue of The Magazine of Fantasy and Science Fiction, dozens more appeared over the next 30 years, until her death in 1983. Henderson was an elementary school teacher in rural Arizona for much of her adult life, in places as diverse as a “semi-ghost mining town” in Fort Huachuca, and a Japanese internment camp in Sacaton, Arizona, and many of her stories are narrated by elementary teachers. She was a member of The Church of Jesus Christ of Latter-day Saints, although later in life she described herself as Methodist. She never published a novel, which perhaps is why she’s virtually forgotten today. 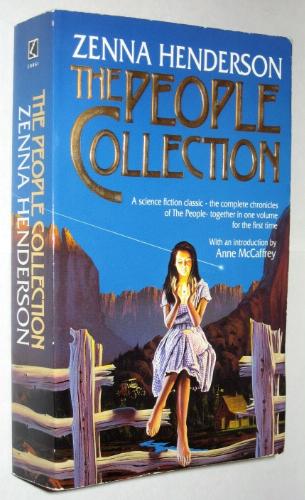 There’s a fine summary of the fiction in these two anthologies at Wikipedia, of all places. Here’s a snippet:

Unlike the People stories, an angry style can be seen in stories collected in two volumes, The Anything Box and Holding Wonder, which in particular uses elementary teachers as narrators. She mentions mental illness in several tales, including obsessive-compulsive disorder in “Swept and Garnished,” and agoraphobia in “Incident After.” In “One Of Them,” a woman’s latent telepathic powers cause her to lose her identity as she unwittingly probes the minds of her co-workers. In “The Believing Child,” a young daughter of a migrant worker believes so strongly in an imaginary magic word that its powers come true; she then uses her newfound powers to take revenge on her abusive classmates. And in “You Know What, Teacher?” a young girl confides in her teacher of her father’s philandering, and of her mother’s plan for revenge. In the short story “The Closest School,” a xenophobic school board president reaches outside himself to admit a gentle child who happens to be a furry, purple 14-eyed alien.

Here’s the complete TOC for The Anything Box. 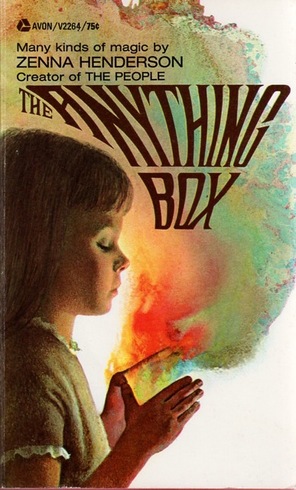 The Anything Box was published in hardcover by Doubleday in 1965, and reprinted in paperback by Avon in 1969 with a cover by Hector Garrido (at right). The 1977 (and later) paperback editions had a new cover by Garrido (top). The paperback edition was 191 pages, priced at $1.50 in 1977.

“The Indelible Kind”
“The Walls”

plus an additional 18 tales, less than half of which (8 out of 20) have previously been published. Here’s the TOC.

Holding Wonder was published in hardcover by Doubleday in 1971, and reprinted in paperback in August 1972. It is 301 pages, priced at 95 cents. The beautiful cover is uncredited.

See all of our recent Vintage Treasures here>.

Holding Wonder is one big missing piece in my sf/f collection, so I will add it to my list of Things to Look For.

Ms. Henderson would seem to be a wonderful candidate for the Cordwainer Smith Rediscovery Award, and I wonder why the judges have not yet selected her. She certainly ranks just behind past winners like Catherine Moore and Leigh Brackett. (Again, another good reason to attend Readercon, the home of the CS Rediscovery Award ceremony.)

Not a bad suggestion, Eugene… I’ve never been to Readercon, and I regret not attending every year!

I would be happy to meet you in Quincy, MA next year and share a Readercon with you, if Fate allows. And the good Ms. C.S.E. Cooney is likely to be present, as well.

I had these books and her others many years ago. I loved her writing.

She usually is! Her readings are worth the trip in themselves.

> I had these books and her others many years ago. I loved her writing.

Glad to hear it, hyrosen. I wish I had discovered her as early as you did.

John, thanks for featuring Zenna Henderson. Her stories about The People were favorites of mine. Before Amazon, I went from one bookstore to another searching for them. As you stated, The People were extraterrestrials with paranormal abilities. Many of their space ships didn’t make it here and those who did were scattered across the American Southwest. She relates their individual experiences. The Wikipedia article on Henderson mentions “NY Times” reviewer Basil Davenport described the stories as “haunting.” They were that. Her descriptions of the treatment some of these aliens received because of their special abilities were, at times, painful to read. Perhaps her theme that different was dangerous was influenced by her own experiences as a teacher in a Japanese Internment Camp during WWII. Sadly, over 60 years later that theme is still relevant.

The characters in Alexander Key’s “Escape to Witch Mountain” (Disney movie and book) reminded me of Henderson’s The People.

I wish they would release an official version of the TV movie: https://www.youtube.com/watch?v=UyaaQdaQID4

> The characters in Alexander Key’s “Escape to Witch Mountain” (Disney movie and book) reminded me of Henderson’s The People.

You know, I never made that connection before, but it’s obvious now that you point it out. I LOVED the novel Escape to Witch Mountain as a kid, and I eagerly lined up to see the Disney adaptation… it’s the first time I remember becoming aware that movies could be books first.

I even enjoyed the recent re-make with The Rock, although it did make me nostalgic to see the original movie…

> I wish they would release an official version of the TV movie: https://www.youtube.com/watch?v=UyaaQdaQID4

Holy cow, I never knew there was a TV movie of The People…. thanks for the link!