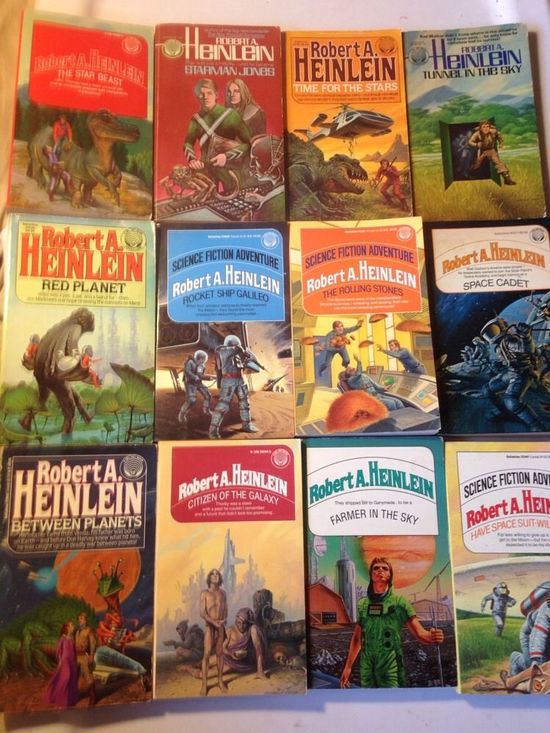 Over at his blog Auxiliary Memory, James Wallace Harris has posted a heartfelt and clear-eyed tribute to the science fiction of the 1950s, and asks the question: Is there more to classic SF than mere nostalgia?

The 1950s were strange in that people thought civilization was coming to an end and hoped to expand civilization across the galaxy. What a schizoid dichotomy. And I grasped that as a kid. Maybe that’s the trip that got laid on me that I’m trying to understand. To me, the absolutely best inheritance I received from the 1950s were the Heinlein juveniles I first discovered in 1964, when I was still twelve (the Golden Age of Science Fiction). In fact, all my reading of science fiction feels like it’s been downhill ever since I first read Have Space Suit-Will Travel, Tunnel in the Sky, Time for the Stars, The Rolling Stones, Red Planet, Starman Jones, Farmer in the Sky, Between Planets, Space Cadet, Citizen of the Galaxy, The Star Beast and Rocketship Galileo. There were other young adult SF from the 1950s that I loved; books by Andre Norton, Isaac Asimov, Donald Wollheim, and the whole series from Winston Science Fiction. But the Heinlein twelve were always the pinnacle of SF for me.

A man after my own heart!

I skimmed his article and was very pleased to see his love for If magazine. I collect comics primarily and the pulps a bit but a remark made at my father’s funeral led to a three year collecting spree of all the 175 If magazines-mostly from three sources. For me Keith Laumer was the attraction and a small attempt at annoying my brother who always despised my collecting–his loss. I have NOT bothered with the Galaxy issues that incorporated If but I do covet that 1985 revival issue which HAS eluded me.

Heh, “who reads Shakespeare any more…? Has anyone ever touched Jack London…?”

Looks like someone scored a bunch of HEINLEIN novels on eBay! Congratulations!

> Looks like someone scored a bunch of HEINLEIN novels on eBay! Congratulations!

Am I that obvious?

I can still remember my surprise to discover that the “Golden Age” of science fiction was allegedly 1938-1946, when clearly, to my 1970s reading self, it was the 1950s, the period which filled up the sf shelves in my local public library with novels and anthologies and collections. With the addition of recent decades, I suppose that the 1950s no longer bulk so large in the sf corpus, but I still like to drop in a few 1950s titles for my monthly reading group, like The Space Merchants, I Am Legend, and I, Robot over the past 2 years.

Plus, even recent sf references classic sf. See Lavie Tidhar’s Central Station which name-checks “shambleau” from Catherine Moore and “the Up and Out” of Cordwainer Smith. Cannot collect the Easter eggs if you cannot recognize them!

John, how about some details on your latest eBay score?

What titles are included in the “Heinlein juveniles”? I always hear this phrase but I’m never sure which Heinlein novels it refers to.

Basically, I think the Heinlein juvies are everything in John’s photo, plus maybe Podkayne of Mars?

Thanks Joe H. So there are 13 Heinlein juvies in all.

It is thanks to articles like this that I do read older stuff. I used to read predominantly modern books. I think I had an immature and of course incorrect pre conception that old sf was boring, outdated, perhaps cheesy. Thankfully I have learned the error in my ways.

Yep, unless there are any that I’m forgetting. He started writing them in the late 1940s and the bulk of them date from the 1950s; they were all aimed squarely at what we’d probably call the YA market today.

> very pleased to see his love for If magazine… I do covet that 1985 revival issue which HAS eluded me.

I didn’t even know there WAS a revival issue. A few minutes of searching confirmed that there was a single issue in Fall 1986, edited by Clifford Hong. Here’s a nice big pic:

Now I want it too! Off to track down a copy….

Of course, you can download a digital copy at the Internet archive here: