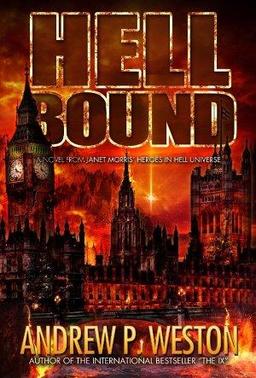 Hell Bound is the latest novel by Andrew Paul Weston, best-selling author of The Guardian series, The Cambion Journals, and The IX, (which I reviewed for Black Gate here.) Hell Bound is also the latest novel in the Heroes in Hell shared-world universe, created by author/publisher Janet Morris.

The main character in Hell Bound is Daemon Grim, Satan’s bounty hunter, also known as the Reaper. Not only does he hunt down any damned soul in Hell who gets on the wrong side of His Satanic Majesty, he has the power to visit our world and harvest those who belong in Hell, souls Satan wants in Hell now. Grim can travel between Earth and Hell using a special sickle or scythe that can open portals between the two realms. This scythe also possesses a powerful weapon called God Grace’s, which gives Grim the ability to utterly destroy souls. Since there’s no death in Hell as we know it, (the Damned are already dead) there is instead Reassignment, a twisted version of resurrection handled by an unsavory character known only as the Undertaker. However, there is Oblivion — total obliteration into non-existence. Grim’s weapon gives him the power to send souls howling into eternal nothingness.

The plot concerns Grim’s mission to track down Doctor Thomas Neill Cream, the English physician who in real life was the brilliant and infamous Lambeth Poisoner. Cream has been stealing long-hidden relics and angelic weapons from the Time of the Sundering, when Satan and his followers were cast out of Heaven. All history and knowledge of the Sundering is banned in Hell, but Cream may have illegal access to Satan’s bureaucratic network.

Thus he and his crew of cohorts, including Frederick Chopin, have been able to steal these ancient artifacts, one by one. Cream is clever and manages to stay one step ahead of Grim, always avoiding capture and Reassignment. Cream is playing a cat and mouse game with Grim, leaving clues in place of each stolen artifact — clues written in the form of poetic riddles, which Cream must unravel. The first of these clues included a piece of carbonized bone from a Heavenly angel who was destroyed in the original battle of the Sundering. How did Cream get his hands on that? What are his plans? What is his ultimate goal? 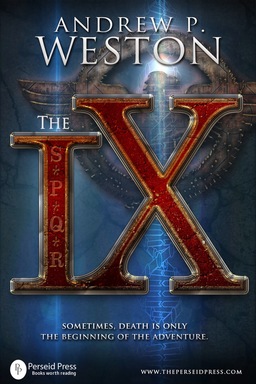 This is the mystery Grim must solve in order for him to bring Cream to justice (or “injustice,” as it’s called in Hell), and we aren’t privy to what’s going on until he unravels each clue and each riddle. We know only what Grim knows.

So Grim gathers his Hell Hounds and they set out to nail Cream. Among his Hell Hounds is Nimrod, one-time ancient King of Shinar, who’s almost as deadly in battle as Grim himself. Then there’s Grim’s female assistants, especially his l’amour de sa vie, the Inquisitor Strawberry Fields, a/k/a Red Riding Hood. Grim also encounters Nikola Tesla, from whom who he gets a “multi-phasic portal generator.” Although it’s glitch-free, it was designed to function only twice before self-destructing. Anyone using it is invisible to surveillance, which aids Grim in his search for Doctor Cream. Just envisage where you wish to go and — shazam, you’re there!

There are gizmos and gadgets galore in Hell Bound, all adding to the fun of this novel. One of these is the Scroll of Divergent Union, which is an “acoustic seraphim incantation” that causes the veil drop between all the realms of Heaven, Hell, and Earth. At one point, Grim visits the Sphincter, a top-secret storage facility where artifacts from the Time of Sundering are housed — and where Cream has somehow managed to get past all the high-tech security. But how did he manage to do that? Using one of Tesla’s many inventions?

Weston has not only expanded the scope of the Heroes in Hell series, he has introduced new themes and concepts, and new characters. He creates a fresh vision of Hell and presents to us a seedy underworld uniquely his own. Grim lives in Olde London Town, a macabre mockery of our earthly London. Rather than make up strange-sounding, nearly unpronounceable names, and because Hell is a twisted echo of Earth, Weston (as do all those who write for Heroes in Hell) comes up with names and titles that bear a warped familiarity to places and things we know. For example: Paris is Perish, Seine River is River Inseine, Drury Lane is Dreary Lane, Piccadilly Circus is Icepiccadilly, Westminster in Westmonster, and so on.

Everything on Earth has its infernal counterpart in Hell. 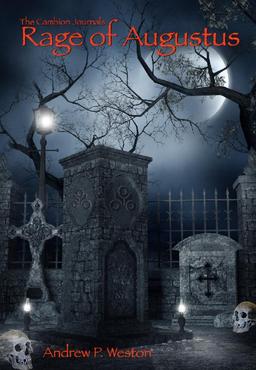 Things in Hell often relate to things on Earth. Hell is Earth’s wicked and perverted mirror’s image. Not only do we go through the looking glass and down the rabbit hole when entering Hell, we also enter another, diabolical dimension where not only pain and torment and suffering rule, there’s also a grand touch of irony to everything that happens in the underworlds. Hell mimics Earth is a fiendish way, and if you think things can get messed up on Earth… just wait. Hell may give you what you want and what you need, but these things are never quite what you asked for. Hell is not what you’d expected, so always expect the unexpected. Hell gives and Hell takes away, and in Hell the Damned get just what they deserve.

Hell Bound is an epic and fast-paced adventure. Part Gothic, 19th century-style mystery, part sword and sorcery, and part horror with elements of science fiction. This is a grand tour of Hell. It’s a manhunt throughout “Infernity,” brought to life by Weston’s literary style and prose that often reach poetic levels of grace. But the heart of the story is Daemon Grim, a character who works for Satan, a character who is supposed to be evil and villainous, but often comes across as heroic and valiant. Walking that fine line is part of Weston’s talent.

Grim has his own code of ethics and morals to which he clings tenaciously.

Grim is an enigma.

Grim is one soul you don’t want to cross swords with. You can’t reason with him or tempt him. He feels no pity, sorrow or remorse. And yet, he has a wicked sense of humor, very good manners, never lies, and he values truth, honesty and loyalty. These make him a paradox, and part of the mystery. We’re never told exactly who or what he is — or was. Fallen angel? Demon? Human? A Heavenly angel, who has been captured, corrupted and enslaved by Satan? Perhaps he is the Grim Reaper — Death himself? But not even Grim knows: he can’t remember anything before his awakening in Hell… and that final revelation will no doubt eventually play out in future novels.

As powerful, ruthless and deadly as he is, Grim is also very much a human character, with flaws and virtues — yes, even in Hell, the Damned can have virtues. This is part of the fun and part of the puzzle of Hell Bound and why I enjoyed it so much. Daemon Grim carried the story on his shoulders and kept me reading to the last page. What’s more, you need not be familiar with any other books in the Heroes in Hell series in order to enjoy Hell Bound… but it will add to enjoyment if you are.

Joe Bonadonna’s last review for us was Dean R. Koontz’s The Haunted Earth.

Thanks to all who enjoyed this review of mine and helped to give it some legs!

Thank you to those who stop by. Hell Hounds is due later in 2017. Stay tuned, the Universe gets darker with every instalment 🙂