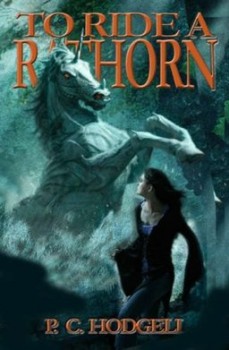 It’s taken me two years, but I’ve finally returned to P. C. Hodgell’s Kencyrath Cycle, with the fourth book, To Ride a Rathorn. A rathorn is a deadly, carnivorous, horned, horse-like animal covered in heavy plates of ivory. For the Kencyrath, to ride a rathorn is to try to do something insane, and our heroine Jame is about to do just that. She has accepted her destiny as a crucial element of the final showdown with Perimal Darkling, a world-devouring force of chaos and evil. At the same time, several forces are arrayed against her: the enemies of her family, the weight of millennia of traditions, and terrible agents of utter darkness. Instead of just crawling away and hiding, Jame has decided to take on all comers, and figuratively — and perhaps literally — ride a rathorn.

Four books in, to say the series is complicated is like saying the sun is hot or the oceans wet. Hodgell has created one of the densest and tremendously detailed fantasy settings, and to even look at this book without having read its predecessors just might make a reader’s brain explode. But as I often ask: have you taken my advice and read the other books yet? Because you should have by now. To get a better understanding of what’s gone on before, you can read my reviews of the first three — God Stalk, Dark of the Moon, and Seeker’s Mask — right here at Black Gate. If you don’t have time, though, here’s a relatively brief synopsis:

Thirty thousand years ago, Perimal Darkling began to devour the series of parallel universes called the Chain of Creation. To fight against it, the Three-Faced God forged three separate races into one; feline-like Arrin-Ken to serve as judges, the heavily muscled Kendar to serve as soldiers and craftsmen, and the fine-featured humanoid Highborn to rule them. For 27,000 years, the Kencyrath fought a losing battle, one universe after another falling to the darkness. Three thousand years ago, the High Lord Gerridon, fearful of death, betrayed his people to Perimal Darkling in exchange for immortality. Fleeing yet again, the Kencyrath landed on the world of Rathilien. Since then, they haven’t heard from their god, and Perimal Darkling has seemed satisfied to lurk at the edges of their new home. Monotheists trapped on an alien world with many gods, the Kencyrath have had to struggle to find their own place and survive on Rathilien.

Now, the power of the Three-Faced God seems to be reappearing. The Kencyrath believe that only the Tyr-ridan, three Highborn reflecting the three aspects of their god — destroyer, preserver, and creator — will be able to defeat Perimal Darkling. Jame, raised in the heart of Perimal Darkling, is fated to be the Regonereth, That-Which-Destroys. Much of To Ride a Rathorn is about Jame coming to grips with her destiny, and trying to keep it from destroying her.

At the end of the previous book, Seeker’s Mask, after Jame’s utter failure to conform to the severe restrictions of the purdah of the Women’s World, a novel solution was devised for dealing with her. Her brother, Torisen, Lord of the House of Knorth and High Lord of all the Kencyrath, declared her his heir. By tradition, a lord’s heir attends Tentir, the Kencyrath military academy, so off she goes, bringing the chaos and disruption that always follow in her wake.

Jame, by dint of her background and personality, is an outsider. Highborn women always go veiled, so the fact she does not terrifies some of her fellow cadets. During training exercises some can’t even make eye contact with her. Her arrival among the Kencyrath has reignited old hatreds towards her family and caused other houses’ plans to go awry. This means some other students are under explicit orders to make life difficult for her, or worse. The catclaws that spring from her fingertips mark her as Shanir and outcast. A loner by nature, she also sets herself apart lots of the time, even from the other cadets from the House of Knorth.

A complaint made about To Ride a Rathorn is that it doesn’t do much to advance the greater story of the series, that is, the war against Perimal Darkling. I can’t argue too much with that, but I would say it’s utterly unimportant. This book is about Jame facing a terrible destiny, finding a place in the Kencyrath world, forging a reconciliation with her brother, and overcoming her harrowing past. It’s about growing into her role as her brother’s heir, as commander of her group of cadets, and above all, growing into her role as part of the Kencyrath’s destiny.

It’s also about solving mysteries, with which To Ride a Rathorn is packed. What happened when her father and uncle were cadets that left a third cadet dead and a room covered in blood? Why did her uncle torture his grandmother’s magical horse (now known as the Shame of Tentir), which haunts the hills around the academy? Why does the Witch of the House of Wilden hate Jame’s family so much, and did she hire the assassins that killed all the Knorth women thirty years ago? What exactly is the monster in the academy’s basement? Who is the strange, pale-skinned, white-haired man lurking in the woods around Tentir? With its secret passages, forgotten chambers, and covered up past crimes, Hodgell has created a superlative Gothic world for Jame and the reader to explore.

Jame remains one of my favorite fictional characters. She cleaves to her honor and kindness, both as innate elements of her concept of who she is, and as things to keep her from going mad or losing control to the turmoil that swirls around her and her probable role as the Destroyer. Kencyrath society, once built on honor and loyalty, has become perverted during the sojourn in Rathilien. Once-noble laws have deteriorated to a system that is greatly warped, and Jame is curious and smart enough to see what needs to be broken, and bold and willing enough to break it. There are times she gets upset by the fact that her actions might hurt individuals, but she’s never tortured or mopey. Instead, she’s truly heroic (something, I suspect, Jame would strongly protest being called), and makes the decisions that need to be made, and then face any consequences with as much courage as she can summon.

She’s also funny. Her perpetual outsider-hood allows her to see people’s follies and peccadilloes in wry and witty ways. Despite her skill as a dancer and knife-fighter, she’s also given to fits of clumsiness, setting the stage for numerous bouts of slapstick and pratfalls. As dark as To Ride a Rathorn becomes at times, Hodgell leavens it with just the right amount of appropriate humor to avoid the exaggerated cynicism and misery of some other contemporary fantasy.

And that’s only part of the book. The other concerns Jame’s brother, Torisen. Bedeviled by nightmares and beset by the other Houses trying to get him to marry one of their own, he struggles to maintain his hold as Kencyrath High Lord. While Jame’s adventures allow the reader to see the Kencyrath from a newcomer’s perspective, Torisen’s show it from an insider’s. While not quite as compelling a character as Jame (it’s hard for someone who’s nightmare-ridden and close-mouthed to compete with a hyperkinetic bundle of mayhem), he is coming into his own as he, too, is beginning to see the deep problems in the Kencyrath.

The more I read Hodgell’s work, the more I appreciate it. For more than thirty years now, she has been creating one of the most memorable works of fantasy. The Kencyrath are an intimately described and logically developed people. As the books progress, their motives and ambitions are being thoroughly excavated. Hodgell also has a great mastery over tone and style, seen in the way she glides effortlessly from rousing actions, to goofy comedy, to chilling mystery, and then over to backstabbing power politics, before going back to action again.

With its Old Gods, (evocatively named the Eaten One, the Falling Man, the Earth Wife, and the Burnt Man), New Gods, and magic that seems to ooze out of every nook and cranny, Rathilien is a wonderfully strange and most unforgettable fantasy world. The control with which Hodgell has brought it all to life, revealing only a hint here, allowing a glance there, is masterful. Even this far in, it remains a place of mystery and wonder.

That these books do not have wider recognition, that P.C. Hodgell is not a better appreciated writer, both puzzles me and makes me a little sad. She brings so much to her creations, making them brim with life and energy. I find it hard to understand how this has happened. I hope these pieces I write will encourage a few of you who haven’t yet succumbed to her talent to give the books a go.

To Ride a Rathorn is a very good book, but to appreciate it you really need to go back to the series’ beginning. There’s no more to say about it than that. If you hate the dullness that has burnished so much modern fantasy a dull gray, save when it’s splashed with viscera, pick up a copy of God Stalk and let yourself be buffeted about by the weirdness of Rathilien and charm of Jame. Before you know it, I believe you will be following her on the road back to her people and to her final destiny, whatever that may prove to be.

Let me warn newcomers to these books, Hodgell’s writing is thick with description and bits and pieces of world building to the point of opacity at times. It feels like she throws out ideas that could serve as the jumping-off point for a whole other book on nearly every page, and it can be all but overwhelming. I’ve read and reread the first three volumes several times each, and still, I find myself turning constantly to the glossary because, for the life of me, I can’t remember who was who, or whose castle was which. It all adds to the physicality and the reality of her invented world, but it can be a little distracting at times.

Thank you very much for these reviews. Like you, I discovered God Stalk on a lark around 1984, loved it, passed it on…and never got it back. I’ve since bought copies for a daughter, another friend or two, etc.

I have not personally read it in 30+ years, but I still remember it as “wonderfully different.” I’m ordering again today, and will make an effort to dig deeper into the series.

The way the a and t are covered up by the hrose’s hea don that cover makes my mind go Rhyhorn.

@Joe H – Absolutely go back. I remember the Hypatia Press editions and simply couldn’t justify/afford buying them at the time – so I had to wait for years until the Meisha Merlin tradepaper came out