In the last few weeks I’ve touched on a few tales of modern writers who didn’t make it — or at least, fantasy series that never got off the ground, and died after one or two hardcover releases without even a paperback edition. To switch things up a bit, today I thought I’d look at one of the most successful fantasy debuts of all time, a series that became a huge international hit with its first release, launching the career of one of the most prolific fantasy writers of the late 20th Century: Janet Morris’ The Silistra Quartet.

The Silistra Quartet began with Janet’s first novel, High Couch of Silistra, which appeared in paperback from Bantam Books in 1977 with a classic cover by Boris (above left). Although it was packaged as fantasy, High Couch was really science fiction, the far-future tale of the colony planet of Silistra, still recovering from an ancient war that left the planet scarred and much of the population infertile. With a dangerously low birth-rate, it’s not long before the human colonists of Silistra develop a new social order, with a hierarchy based on fertility and sexual prowess.

High Couch of Silistra received a lot of positive press attention, and Janet released the sequel, The Golden Sword (above right, cover by Bob Larkin), the following year. It outsold the first one, and her career was well underway.

All told, there were four volumes in what came to be known as The Silistra Quartet, all published as paperback originals by Bantam Books.

Bob Larkin returned to do the cover for the fourth volume (below right). The cover artist for Wind from the Abyss (below left) was uncredited.

Here’s the colorful description from the back of High Couch of Silistra:

Long ago, the human colonists of Silistra waged a war so vicious that, centuries later, the planet has not recovered. Men and women alike suffer from infertility — the deadliest legacy of that deadly war. Because the birth rate is so low, the Silistrans value above all the ability to bear children, and their social order is based on fertility and sexual prowess. On a planet desperate for population, women hold the keys to power. These are the adventures of Estri, Well-Keepress of Astria and holder of the ultimate seat of control: The High Couch of Silistra.

When Bantam re-released the entire series in 1981, they hired artist Lou Feck — known for his standout work on the Star Trek paperbacks, and his defining work on Robert E. Howard’s Kull paperbacks, among others — to produce four brand new covers. Here they are.

One thing I liked about the Feck editions was that they advertised the other volumes on the back, which made it easy to track down the entire series. 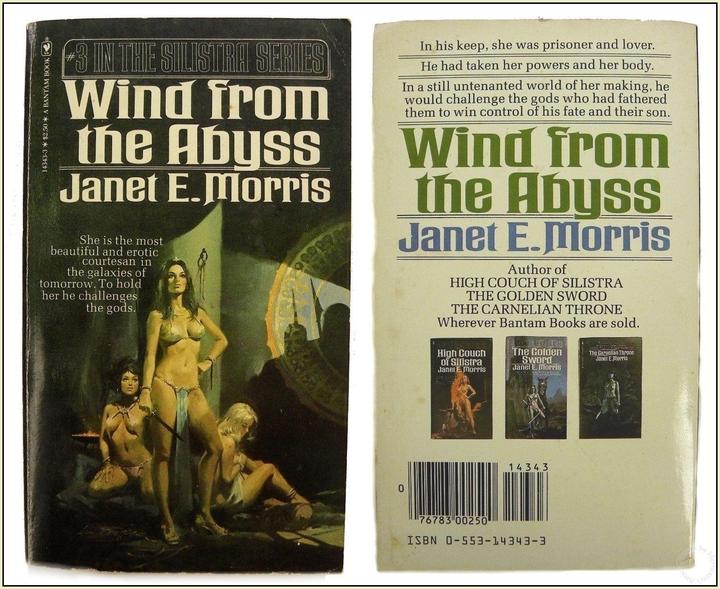 I got to know Janet years later, and she was kind enough to answer my questions about the genesis of the series for this article. Here’s what she said.

High Couch was the first book I ever wrote and my first published work; the manuscript was my first draft, and the only change Fred Pohl request was one passage near the end and the addition of a glossary; that paperback original achieved a New York Times Sunday Magazine review.

On the basis of High Couch, Bantam bought the next three in the series when each was presented to them. The second book, The Golden Sword, outsold High Couch in its first edition. By the time the fourth in the quartet, The Carnelian Throne, was released, according to Bantam’s ads, they had over 4 million copies of the first three in Bantam print.

I hadn’t liked the Boris cover, so Bantam then did a second edition with covers by Lou Feck. My agent, Perry Knowlton of Curtis Brown Ltd, achieved many foreign language sales, including French, German, Italian, and several more. Based on Silistra‘s sales, my next trilogy, the Dream Dancer or Kerrion Space saga, went to auction in the U.S. and UK simultaneously and, now able to quit my day job, I was able to make my living as a novelist for over 20 years, until I withdrew from fiction writing in favor of nonfiction writing in the defense and International security arena. I returned to fiction writing in 2010.

Janet also sent me an assortment of foreign covers. I don’t have space for them all (sorry Janet!), but here’s a sampling. The two on the left are by Chris Achilleos.

In the US, Baen re-released the entire series in 1984-85, once again with brand new covers, this time by Victoria Poyser. High Couch of Silistra was re-titled Returning Creation for the Baen edition.

Here’s a collage of some of the English and foreign editions in the series: 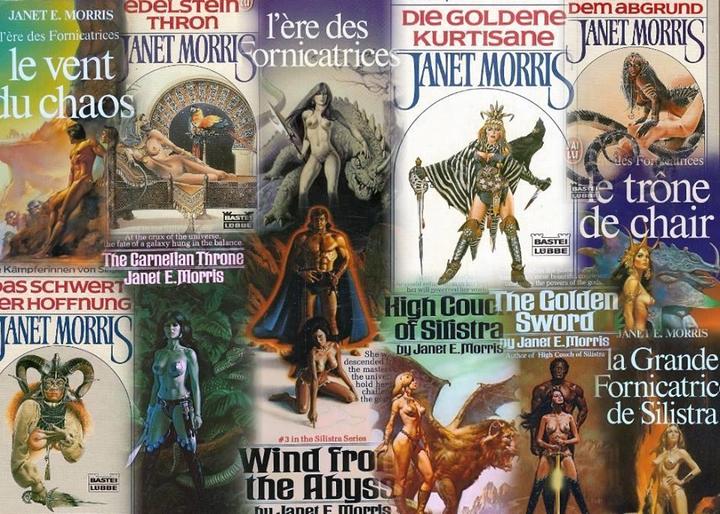 The books were out of print for over 30 years… until Janet began reprinting them in brand new Author’s Cut Editions through Perseid Press, beginning with High Couch of Silistra in September 2015. Here’s the announcement for The Golden Sword, which Janet tells me will be available in digital format in May. 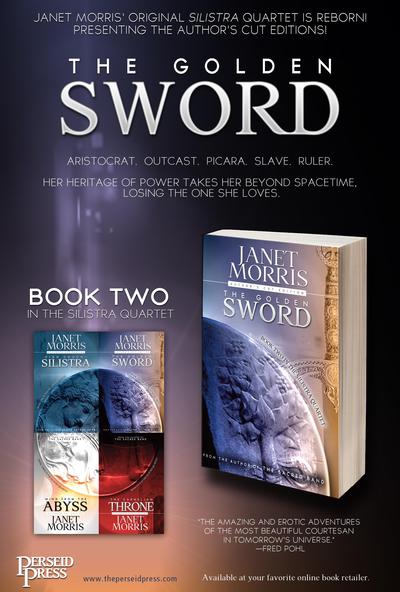 Here’s a closer look at the cover for The Golden Sword. 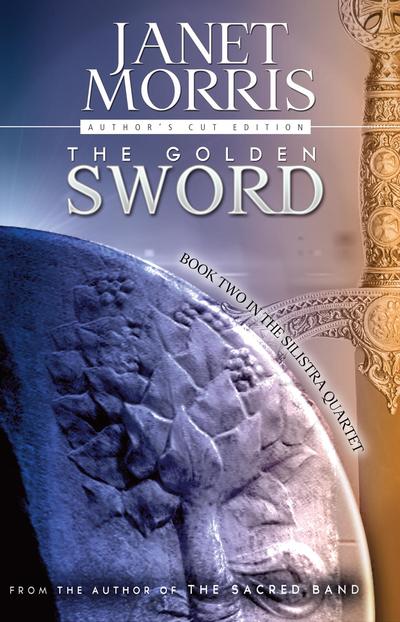 See more details on the entire series at the Perseid Press website.

“Seven Against Hell”
An excerpt from The Sacred Band

I’m new to the series and absolutely loved High Couch. I’ve been looking forward to the follow-up,The Golden Sword for some months now. Glad to see its on the way.
As I said in my review…
“…In High Couch of Silistra, you’ll find the pomp and space opera scope associated with the likes of Dune. You’ll find a vocabulary reminiscent of Stephen Donaldson at his best. And you’ll discover a flair for worldbuilding few can match…”
If you’ve not read this series yet. Treat yourselves. You won’t regret it.

A great review, Andrew! Thanks for sharing it. Is there a longer version online somewhere?

There certainly is John.
It’s rather lengthy and somewhat in-depth, so here’s the link:
http://www.amazon.com/gp/customer-reviews/R12JE5QSHTEJ4Z/ref=cm_cr_getr_d_rvw_ttl?ie=UTF8&ASIN=B014RGHCG2