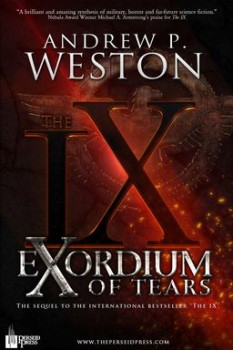 From his home in the Aegean, author Andrew P. Weston has sent out another blast of science fiction action (yeah, I don’t read only fantasy) with his new book The IX: Exordium of Tears, recounting the further adventures of the famous Legio IX Hispana. The preceding volume, The IX, was released last year and reviewed at Black Gate by me here.

To recap: the Roman IX Legion, their Celtic adversaries, US cavalry troopers, their American Indian foes, and a squad of British special forces operators were torn from their respective times just as they were about to be killed in battle, and teleported to the planet Arden. There, under the guidance of the planet-controlling AI “the Architect”, they were set to fight against the Horde, an endless force of energy-eating beings who had worked their way through the billions of inhabitants of the many worlds of the spacefaring Ardenese civilization. The Architect’s plan for surival is to store the genetic templates of the surviving Ardenese and revive them in the future, while using the warlike humans to destroy the Horde. In league with the survivors of previous groups of teleported humans from other timelines, guided by the super computer, and armed with such fun toys as mini-singularity bombs, the newcomers do just that. The books show their old school sci-fi roots in this bit of Campbellian human chauvinism. They also bring to mind stories by Gordon Dickson and Jerry Pournelle, a strong mark in their favor.

In the year between their victory and the start of the new book, many of the Ardenese are restored to life. Together, they and the humans are striving to restore the planet Arden to its pre-Horde state, but peace is fleeting.

The first indication that the present tranquility will not last comes from a seemingly supernatural source. Stained-With-Blood, leader of the American Indians, has been warned in his psychic journeying that a threat to the existence of everything is at hand.

With the words “Behold the day of our future’s end” he is shown a vision of the rising sun that turns swiftly to horror:

All was not well, however, for the only part of the luminary to appear healthy was the corona. Its surface looked dull, as if Stained-With-Blood were viewing it through the filters he had seen employed by the pilots of Rhomane’s flying craft when they were in space.

As he watched, he was horrified to see the star darken to black. Then it started devouring everything around it. Rocks, mountains, forests, and plains. Rivers, lakes, seas, and oceans. The whole world distorted, and his perspective rushed to keep pace.

Next, he found himself above the monstrosity, looking down into a well of never-ending hunger. Time ceased to have any meaning. The heavens wheeled, and the dark jaws continued to feed. The more the anomaly consumed, the more its malignant influence grew. Soon, its presence reached throughout the farthest reaches of the galaxy.

It is an abomination.

In search of the source of this hazard, the humans and resurrected Ardenese reexamine where the Horde first appeared. The planet Exordium, deep within the black hole-filled Verianda Nebula, was the center for esoteric destructive technology: “Weapons that could shatter worlds or destroy suns. Devices that could alter structures at the molecular level, or mutate DNA.”

Based on records of the Horde’s initial attack and estimates of its abilities, the resurrected Ardenese theorize a substantial contingent remains on Exordium. The vast energy resources and technology on the research planet have the potential to make those survivors stronger and more powerful than any they have fought before. Something must be done.

Outfitted with a dazzling new space dreadnought, The Chariot of Spring, a “two-mile long leviathan” that bristles “with gun turrets, torpedo and missile ports,” an expedition is sent into the nebula. With special forces equipped to fight in zero-g, Roman legionaries and Celtic warriors armed to fight energy monsters, and lots of those mini-singularity bombs I mentioned earlier, the expedition hopes it’s prepared for whatever it finds.

There are several good bits in the book’s first third, particularly Weston’s perfectly alien depictions of the Horde and the world from their perspective. Too much time, though, is taken up with characters talking about things and planning their next actions. While these sections serve to establish the plot, they also delay the confrontation between the human/Ardense protagonists and the Horde. It’s with the launching of the interstellar voyage that Exordium takes off.

As with its predecessor, my strongest criticism of Exordium is Weston’s overuse of Tom Clancy-like techno- and military talk. I appreciate the realism it lends to the proceedings, but it tends to get in the way of the wonderfully inventive action being conjured up on the page. 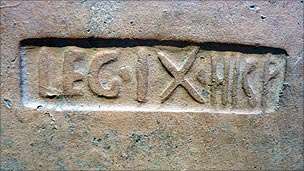 Where the book comes to life is in the combat, as well it should. Whether in infantry actions, or at the planetary level, Weston writes with enjoyable clarity. Never once did I struggle to understand the choreography of his fights, a problem far too common in combat-heavy fiction. I appreciate his depictions of the natures and outlooks of the various military characters. In reviewing the previous volume I singled out his compelling picture of the Romans as stolid and self-sacrificing. To that image, this book adds how they might integrate and react to such outlandishly transformed surroundings. Weston served in both the military and the police, and I imagine his own experiences help make these characters read true.

It’s also in the combat sequences where his prose flows best, and springs to life with more brightness than anywhere else. There are moments of terror as even veteran soldiers find themselves struggling on the sharp end of the enemy’s spear. Moments of wonder, too, as they fight in the starkness of space’s vacuum, such as when a pulsar is bombarded to form a singularity:

Seraphim did as instructed, and their vista transposed. Mohammed now felt sure he was looking into the eye of a god whose retina was comprised of hypersonic jets of plasma and supercharged ribbons of light.

A scene empyrean in scope and splendor.

Then the entire corona flexed, and neon tendrils lashed out into space. A futile gesture, for the magnitude of the developing maw beneath forced each streamer to curl back and fall to its doom.

The pupil rippled in an agitated sea of static and then contracted, as if the deity had stepped out into bright daylight. Actuality distorted and became viscous, forcing each passing second to labor for its next breath.

Weston has created a big setting and story, but keeps it focused on individuals. He’s also kept that number of individuals to a manageable level so you don’t get lost in a sea of story lines. He’s tapped directly into the main vein of old school military sci-fi, bringing just enough modernity to it to keep it from feeling dated.

The only thing that really bummed me out about Exordium is the end. It ends, and pretty satisfactorily, but it’s not really the end. This book is clearly the setup for more and bigger things down the line and I hate waiting for sequels.

Wow! Thank you so much an honest review, Fletcher. I’m so relieved you enjoyed the action. As I’ve mentioned before, this was a book that was never meant to be written, so, to have pulled you into the thought process of each of the main characters involved is an absolute treasure. Much appreciated. 🙂

Thank you all. I hope to extend the universe in ways that keep you entertained 🙂
(Prelude to Sorrow should be out later this year (2017) – ) And then…
Wait and see 🙂