The lifecycle of a modern anthology ain’t that complicated. It comes out in hardcover or trade paperback from a small press, stays in print for 5-6 years or so — or until the small press suffers a horrible death, whichever comes first — and then vanishes, popping up thereafter only on eBay and at SF conventions, like a Star Trek action figure.

But go back father than that, to the beginnings of American publishing itself — scholars of this dark and mysterious period are conflicted about actual dates, but in general we’re talking about the 1940s and 50s — and we enter a time when paperbacks had a fixed upper page limit. So how did these primitive cave-dwelling publishers reprint popular volumes, like for example John Campbell’s 600-page beast The Astounding Science Fiction Anthology (Simon & Schuster, 1952), when the typical paperback of the era contained barely 100 pages?

No easy task, but our intrepid publishing forefathers found a way. They broke the book up into two volumes and, because giving them similar names would have been just too easy, gave the paperback editions completely different titles. Thus the groundbreaking hardcover edition of The Astounding Science Fiction Anthology spawned two paperbacks: The Astounding Science Fiction Anthology  and Astounding Tales of Space and Time, both of which remained in print in various editions for years, confusing collectors like yours truly for decades. Let’s have a closer look, because I ended up buying all seven of the damn things before I figured out they were all the same book, and they might as well be useful for something.

[Click on any of the covers for bigger versions.] 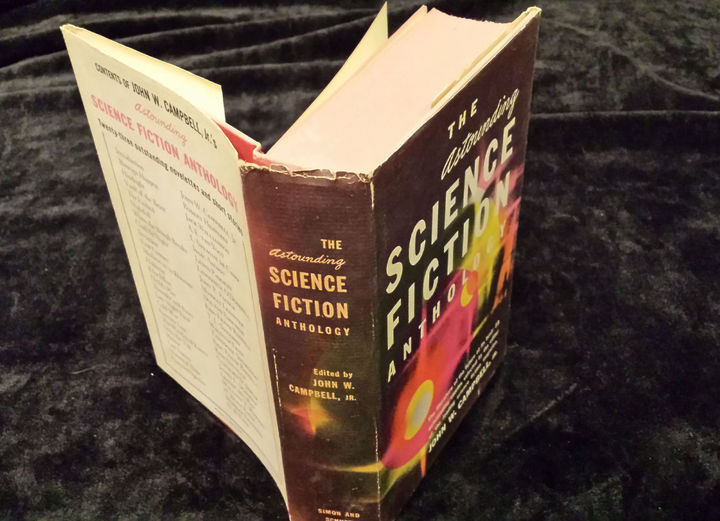 The Astounding Science Fiction Anthology was an almost immediate success in its 1952 hardcover edition, ending up as part of the permanent collection of libraries across the country. It was Campbell’s first hardcover anthology (but by no means his last), and also his first collection of tales gathered from the pages of Astounding. It contained a terrific cross section of famous stories from 1940-1951, including Asimov’s “Nightfall,” Murray Leinster’s “First Contact,” James H. Schmitz’s “The Witches of Karres,” a Paratime novella by H. Beam Piper, a novella by Henry Kuttner and C. L. Moore, and much more.

Altogether, it collected 22 stories, an essay, and a new introduction by Campbell. Here’s the complete TOC.

Isn’t that an impressive list? It serves as a decent one-volume introduction to science fiction, especially for 1952, and that’s exactly what it became for thousands of readers curious about this new genre in the 50s and even the early 60s.

Curiously, for a classic title that had a major impact on the field, the book has never been reprinted in its entirety. It’s still a great read even today, despite the presence of a few stories that have not aged gracefully (Jack Willamson’s gloriously pulpy “Hindsight,” about the invention of a bomb sight so accurate it can see the future, is a prime example. It’s admittedly a tough slog, with maddeningly over-the-top villains, and modern readers will see the ending coming a mile away.)

Here’s a closer look at the front cover by Leo Manso, and the back cover, which doubles as a Table of Contents.

In 1956 and early ’57, Berkley Books issued the first paperback reprints, in two volumes:

Ah, for the days of the 35 cent paperback. You almost didn’t mind that they weren’t much thicker than a folded shopping list. Both had covers by Richard Powers, so at least they looked good.

The Astounding Science Fiction Anthology included 8 of the original 22 stories:

And Astounding Tales of Space and Time contained another 7:

If I’m doing the math right, that left 7 stories unreprinted, not to mention Dolton Edwards’s essay and Campbell’s original introduction (more than enough to fill a third anthology, if anyone out there feels like picking up the slack).

Here’s the back covers, because I love all the chatty marketing copy about editor John W. Campbell.

Nearly a decade later, in 1964, Berkley reprinted both volumes, with a brand new Powers cover for the first, and a cover by Paul Lehr for the second. Because that’s just the way you did things in the 60s.

Here’s the back covers. Note: the color purple was first invented in an IBM lab in the mid-60s, and publishers just couldn’t get enough of it. Brace yourself.

The books continued to sell well right into the late 60s… well enough that Berkley reprinted them a third time in 1969, this time with a pair of gorgeous Paul Lehr covers (see the top of this article). Here’s the back covers of the 1969 editions.

Over the decades I have gradually collected all six paperbacks and, as I mentioned above, I was a little surprised to discover they were all abridged versions of the same book. If I’d known that a little earlier, I could have bought that one and cut out all those middlemen.

Ah well. Then I wouldn’t have all that cool cover art.

Like a lot of folks (presumably), I stumbled on the most recent paperback editions first, and then had to do a little publishing archaeology to piece together the complete publishing history (with extensive help from The Internet Science Fiction Database, naturally.)

In any event, you needn’t make my mistake. The original hardcover edition sold so well over six decades ago that it’s still not particularly hard to find. Copies in good condition are available on eBay for $15 and up ($7 and less for copies without a dust jacket. But come on… who wants a copy without a dust jacket? Don’t be a cheapskate.)

See all our recent coverage of Vintage Treasures here.

You’re right about the great cover artwork on these editions. I like all of them, but the Powers covers are my favorites.

Paul Lehr, boy, was he the artist of sf for the post-Powers era in the 1960s and 1970s or what? Those enigmatic structures poking up above misty alien landscapes. Could not have had Omni magazine without him. Probably worth losing 7 stories just to get his artwork. Excellent choice, Mr. O’Neill!

That’s why, over the years, I’ve made an index to my entire short fiction library—over 6,000 entries in my anthology/collection index alone—so I’ll always know what I’ve got, and what I haven’t.

For instance, 16 of the 23 stories in the Astounding Anthology are somewhere in one of my books. The Asimov/Greenberg series, THE GREAT SCIENCE FICTION STORIES, seems to have nearly all of those, but I don’t have all of those.

In the 1956 Astounding All Time Poll, it was the 8th most popular book (the only anthology to place higher was Adventures in Time and Space). Even as late as the 1999 Locus All Time Poll, it still placed 17th among all time anthologies.

Sorry – that needed a bit of editing. 🙂

> I like all of them, but the Powers covers are my favorites.

Fair enough. But Paul Lehr may be my favorite SF artist of all time, so I tend to favor his covers.

He certainly was, Eugene. And thank you!

And I did eventually buy the hardcover edition too…. I probably should have made that clear. 🙂

> That’s why, over the years, I’ve made an index to my entire short fiction
> library—over 6,000 entries in my anthology/collection index alone

Wow! Okay, that shows a level of dedication to the field far beyond my meager efforts. I started an index to my book collection in 1978, and gave up after about two weeks. As a result, I end up at places like the Windy City Pulp Dealer’s Room every few years, trying to unload hundreds of duplicates….

> In the 1956 Astounding All Time Poll, it was the 8th most popular book (the only
> anthology to place higher was Adventures in Time and Space). Even as late as
> the 1999 Locus All Time Poll, it still placed 17th among all time anthologies.

That’s pretty impressive. And I’ll have to check out that list!

I think those old lists used to be on Mark R. Kelly’s awards database, but you’d have to google around now. By the way, that was six thousand (plus) stories, not six thousand books! 🙂

I bought more than one of these before I realized, like you, that I was buying the same book. Fortunately I bought good condition used copies, so I didn’t break my budget. Still, I weeded out the duplicates and kept just two, the Berkeley editions.

> I weeded out the duplicates and kept just two, the Berkeley editions.

Wait…. ALL the paperbacks were Berkley editions. Which ones did you end up keeping?

The guy who thought JWC was unquestionably the most important editor in the history of science fiction was H. H. Holmes. (One presumes this was Anthony Boucher/William A.P. White, rather than the Chicago serial killer.)

On the back cover of the 35-cent paperback, Holmes was a reviewer for the New York Herald Tribune.

The 60-cent edition no longer mentions Holmes, but it does indicate that his old employer, the New York Herald Tribune, stands firmly by the opinion about Campbell that he expressed so many years before.

We wouldn’t know these things if John ONeill hadn’t bought so many different editions. So thanks, John.

The Astounding Science Fiction Anthology, Part 1 | Futures Past and Present

[…] by Simon and Schuster.  For more on the backstory behind the anthology, see this excellent post at Black Gate.  The stories are presented in the book roughly in the order of publication, beginning with […]