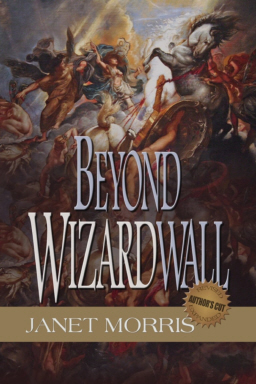 I finish my reviews of the 5-star, Author’s Cut editions of Janet Morris’s classic of Homeric Heroic Fantasy, the Beyond Sanctuary Trilogy, with the third and final book, Beyond Wizardwall. This was the toughest of the three to review because there is so much that happens and so much ground to cover. This is also the most dramatic, tense and emotionally powerful of the three books. Let me begin with a little recap in Janet’s own words:

Heavy snows had put the war against Mygdonia and its Nisibisi wizards into hiatus. Niko’s commander, Tempus, called the Riddler, had employed magic to bring his mixed cadre of shock troops (Rankan 3rd Commando rangers, Tysian ‘specials,’ hillmen of Free Nisibis, and Niko’s unit of Stepsons) back to Tyse for the winter. Fighting had ended inconclusively, with the Mygdonian warlord Ajami still at large.

They ride into Tyse triumphant and settle in to wait for spring, content with the season’s work. All except Niko. Everything in this excellent novel revolves around Niko (who is also known by his war name, Stealth), for what trials he endures and what tribulations he suffers are Herculean and tragic and form the core of this novel.

In the first chapter, he’s at wits’ end, quitting the Sacred Band after he gets rousted by a pair of arrogant 3rd Commandos, wherein things quickly turn ugly and he kills one of the soldiers. Niko escapes and goes into hiding at Brother Bomba’s whorehouse.

This is where the triad of Niko’s troubles begins. First, there is Askelon, the entelechy of dreams, regent of the seventh sphere and an archmage with delusions of godhood. He rules the sleep of all, from his ephemeral archipelago of dreams, Meridian. Then there is Roxane — shape changer, soul eater, and vampire-like witch, who devours the essence of life from hapless mortals. Finally, we have Enlil, the northern Storm Lord and god of the armies. All three come to haunt Niko. 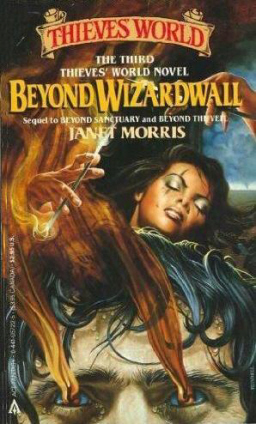 Askelon wants Niko for the purity of his soul, who steals his sleep and wants Stealth for an avatar. Roxane the witch, Death’s Queen, wants Niko’s body and a bit of his soul. And Enlil wants Niko as a representative on earth. Pulled in three directions by three powerful beings of higher octaves, Niko is being driven mad, which leads him into a whirlpool of drink and drugs. To make matters worse, Brachis, High Priest of Vashanka (the Rankan storm god who has disappeared), comes to hire Niko to assassinate Abikithis, the emperor of Ranke, for the good of empire, Vashanka, and Niko’s own soul.

Now, still searching for Niko, wanting him for the murder of one of their own, the 3rd Commandos trash Bomba’s bordello, but Niko manages to escape.

Enter Tempus: The Riddler wrestles with his own demons. Demigod and immortal though he is, he bears a curse of his own: those who love him die of it, and those he loves are bound to spurn him. And Niko, being his right-side companion in war and life, may suffer from that curse, as Tempus himself has long suffered from it.

The Riddler’s heart is troubled, for he has deployed Niko before, pushing him and using him to flush out Roxane the witch, but she’s still at large. Now Tempus fears that Roxane has again possessed Niko and is spying through his eyes. He needs to find Niko, not only to set things to rights, but to find out what Brachis the High Priest wants and to save Niko from the 3rd Commandos, the special unit Tempus formed and trained in his younger days.

To top it all off: there is much anger, competition, and jealousy between the Stepsons and the Commandos. Furthermore, Vashanka, the Rankan Storm God who once was Tempus’s patron, has disappeared. Tempus blames himself for the witch stalking Niko and he will finally bargain with Enlil — save Niko, leave Niko be, and take him, the Riddler, instead. Ah, but things are never quite that easy.

Enter Randal: Seventh Level Hazard Mage, who is also part of the Sacred Band, the only wizard with whom they agree to work. When he returns home, he confronts the mysterious suicide of his guild’s murderous First Hazard Mage. After Niko is found and rescued, Tempus orders Randal to keep an eye on Stealth, his one-time, right-side partner, to protect him and keep track of him. But as you can guess, that’s not going to be an easy task, either. And events are soon set into motion that will quickly throw Randal into the very thick of things. 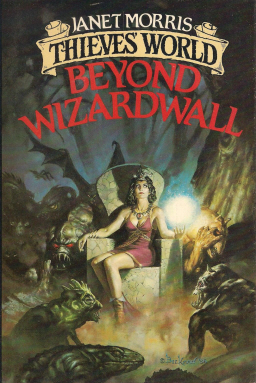 Enter Cime: The dangerous, seductive mage-killer, sister of Tempus in spirit, if not by blood. She breaks into the mageguild one night, casts a spell and seduces the First Hazard, and then murders him. She and Tempus will form a joint occupation to rid the world of sorcerers, except for Randal. If it was up to her, Cime would rid the world of gods, too. Despite her distaste for wizards, she will team up with Randal to help track down Roxane who, weakened and ugly and badly injured after the mage-war, wants a magical globe that Randal possesses.

Don’t forget: Roxane also wants Niko and she uses an innocent young boy named Grippa to get at him.

And then there’s Kama, Tempus’s beautiful daughter, a soldier with the 3rd Commandos, who falls in love with a Stepson named Critias, and who seems to have a secret agenda all her own. Needless to say, she manages to cause a few problems. What does she want? Whose side is she on? What does she seek, besides her father’s approval? What part will she play in the events to come? Jihan, the Froth Daughter of the god Stormbringer, also returns to complicate Tempus’s immortal life, and with her is the young boy with wizard’s blood, Shamshi, whose sad fate will eventually play out in The Sacred Band, which I previously reviewed here, for Black Gate.

As Fate and the gods would have it, all too soon things heat up further for Niko when he’s captured by priests and goes on trial in a kangaroo court designed to find him guilty of murder. He is tortured and maimed beyond all mortal endurance, and what he suffers in one tense, emotionally-charged scene will cut to the core of your heart as it cuts to the heart of Tempus the Riddler. And Tempus, near the end of his own wits, finds a way to capture Roxane, only to end up making a bargain with her to gain her help in saving Niko.

This is a novel of passion and love, powerful and character-driven from start to finish. It’s brilliantly conceived and executed, packing more in its 415 pages then the previous two books combined. Just to give you a sample of what else goes on: During a festival of songs, games, and physical prowess, there is a hostage crisis culminating in a surprising decision by Tempus, and what orders he gives to his Sacred Band. While the war between Ranke and Mygdonia is on hold for the winter, assassination is nevertheless in the air, and there’s a military coup in the works to put an old friend of Tempus’s on the Lion Throne of Ranke. But Ranke is doomed unless their missing god Vashanka is found, for without their god no hand at the helm of empire could be steady enough to put her back on course. 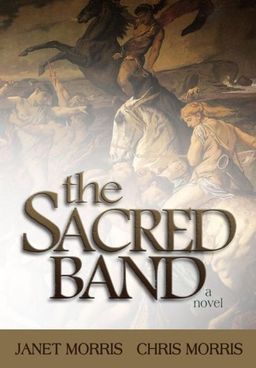 Ah, but no strategy of war lasts long after battle is joined and everything seems to be going wrong, especially after Randal the mage decides to go against Tempus’s orders when he is sent to deliver a message to the Rankan mageguild and discovers, to his dismay, the truth about who the chief’s adepts of his guild just happen to be. There is also a very strange and highly unlikely, often pesky, little hornet and the “reveal” of what that creature is will catch you off-guard… and there’s this cool, orange-haired, gray-skinned demon named Snapper Jo who Roxane summons to serve her.

Beyond Wizardwall is a wonderful novel that expertly caps the Beyond Sanctuary Trilogy in a surprising and satisfying conclusion. It’s a novel of complex characters caught up in complicated situations. Once again, Janet Morris gives us a literary classic of Heroic Fantasy. This is a textured novel, layered with themes of brotherhood and loyalty, love and betrayal, of the magic and majesty of horses, of boys growing into manhood, and the tragedy of those who die all too young. This is a novel filled with fine writing, exciting and talented writing. For example, here is Morris describing simply and most eloquently, the archipelago of dreams known as Meridian:

“Here was no life as men knew it, no days piling one upon the last inexorably; but a different life, a different nature, malleable and ruled by the flux of nature. Sometimes Meridian was beautiful, sometimes horrid, for it held every dream and every dreamer from all mankind’s befuddled flock.

These had no tomorrows, no yesterdays, but only dramas, lusts and fears and doubts — and joys, melodies to set its golden streets vibrating with the turning of the spheres. Meridian was one of the four metaphysical compass points of creation; as such, its existence was never wholly in one realm or another, but roving on a cosmic wind that changed with every dream and dreamer.” 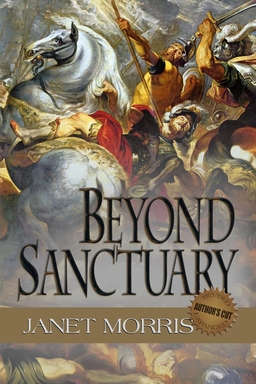 There is plenty of action, humor, sex, pathos, magic, and mystery, as well, and the narrative moves as swiftly as a blood-bay stallion at full gallop. This is Heroic Fantasy at its best, the kind I favor, and this Author’s Cut, which has been revised and expanded for this handsome, brand-new Perseid Press edition is a classic of the genre. But above all, Beyond Wizardwall has heart and compassion. Janet Morris writes about people; her characters live and breathe with the kind of vibrancy and solidity I find inspiring and influential to my own work.

For in the end, without human conflict, without emotional drama, without character growth, without heart, all you have is a narrative. And the soul of this novel is this: we feel the humanity and compassion in Niko; we feel the pain in Tempus’ own heart, know how deeply he loves, how he fears that love. We feel his aching and longing, and what torments his soul. And even in the character of Death’s Queen, the soul-eating witch Roxane, we learn that she can love and that she, too, understands compassion. Once again, bravo Janet Morris!

Life to you, and everlasting glory.

Beyond Wizardwall: The Revised Author’s Cut was published by Perseid Press on November 17, 2013. It is 415 pages, priced at $24.99 in trade paperback, or $6.99 for the digital edition. Cover art detail from The Fall of Phaeton by Peter Paul Rubens.

The Sacred Band
Beyond Sanctuary
Beyond the Veil
Beyond Wizardwall

[…] Tribulations Herculean and Tragic: Beyond Wizardwall by Janet Morris […]

[…] Tribulations Herculean and Tragic: Beyond Wizardwall by Janet Morris  […]

I adore these books. Lyrical, dark and so very well written. I fell in love with the characters and the world quickly.

Thank you, everyone! These reviews were a labor of love, and I’m very happy to know they were appreciated by so many of you!