Poul Anderson formed a pretty consistent part of my paperback SF diet in the late 70s and early 80s. Novels like Mirkheim (1977) and classic tales like the Hugo Award-winning “No Truce with Kings” (1963) made me an early fan. But I always thought of Anderson as an SF writer, and as a result I never paid much attention to his fantasy. It wasn’t until my fellow writers here at Black Gate educated me that I learned what I was missing:

I’ve recently started exploring more of Anderson’s fantasy back catalog, and last month I purchased a copy of A Midsummer Tempest, an alternate world fantasy in which William Shakespeare was an historian, rather than playwright, and the events he recorded were all factual. While the plot draws from multiple Shakespearean plays, as the name implies it is chiefly based on A Midsummer Night’s Dream and The Tempest. It was nominated for both the World Fantasy Award and a Nebula, and won the 1975 Mythopoeic Award for Best Novel.

A Midsummer Tempest novel is set in the era of Cromwell and King Charles I, and deals with both the English Civil War and the first stirrings of the Industrial Revolution (although the timeline Anderson portrays is more advanced than ours). Technology-wielding fairies are part of the plot and, in line with the Shakespearean homage, several of the heroes speak in blank verse.

As you’d expect, the novel is playful in many respects, and Anderson takes full advantage of his alternate timeline. For example, the guard who brings Jennifer into the trap to catch Prince Rupert is Nehemiah Scudder, the famed First Prophet in Robert A. Heinlein’s story “If This Goes On—”.

A Midsummer Tempest was widely praised. Kirkus Reviews called it “A virtuoso performance,” and F&SF labeled it “A rattling good adventure yarn.” Lester del Rey said it was “a fantasy I can recommend with pleasure.”

The book was first released by Doubleday in hardcover. Ballantine produced the first paperback edition in March 1975 with a fine cover by Darrell K. Sweet (below left); it was reprinted in 1978 with a significantly brighter redesign (right).

The first British edition was an Orbit paperback in 1975. 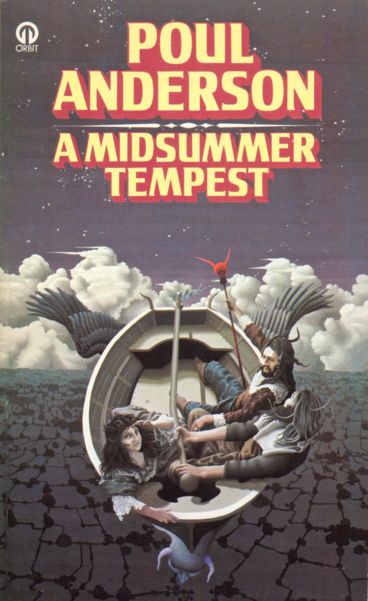 With all those editions, copies of A Midsummer Tempest aren’t hard to find, especially if you’re interested in a paperback. The Tor paperback edition at top is scanned from the copy I bought on eBay for $3.99 (including shipping) last month. Open Road Media published a digital edition in 2014.

Our previous coverage of Poul Anderson includes dozens of articles. Here they are.

The only one of Anderson’s fantasies that I have read is THREE HEARTS AND THREE LIONS. I remember enjoying it but that was over 50 years ago!

Maybe I should resurrect my Anderson survey and review this for you. 🙂

> I remember enjoying it but that was over 50 years ago!

I know exactly how you feel. I have trouble remembering the books I read last year!

> Maybe I should resurrect my Anderson survey and review this for you.

That would be terrific! With my backlog, you’re likelier to read it before I do.

This book is a pleasure to read, but also interesting as it is the link between two of Poul Anderson’s series:

Operation Chaos – starring Matuchek & Greylock, a series of short stories about a werewolf and a white witch battling evil in an alternate America, stories that influenced what we now call urban fantasy.

Anderson was a great SF writer, but his fantasy deserves a look as well. Thanks Black Gate, for keeping a spotlight on one of SF&F’s greats.

I wonder if anyone else sees any parallels between Anderson’s fantasy and that of L. Sprague de Camp? Possibly a little too pleased with themselves for their stories to fully succeed, I find.

I never read much de Camp, so I couldn’t tell if you’re right or not in his case. The bulk of my experience with Poul Anderson’s fantasy has been at short length, and I find him a very proficient story teller in that arena, not at all taken with his own cleverness (well… no more than any other genre writer of the 70s and 80s). 🙂

As far as his fantasy novels go, I’ll have to defer to the experts. Any other opinions?

This sounds like one worth tracking down — and that OPERATION CHAOS sounds right up my alley.