Some writers agonize over every line. Some are prolific like Andre Norton. Others are hyperprolific like Isaac Asimov.

But Lionel Fanthorpe stands alone. He isn’t the most prolific author out there, having written “only” about 200 books, but he had the distinction of having written 168 books in less than a decade. Many he wrote in a week. Some he wrote over a three-day weekend.

This fervid output was the result of his association with Badger Books, a cheap-as-they-come UK publisher that emphasized quantity over quality. The publisher would commission the cover art first (or steal it from some old American paperback), send it to the author, and have them write a 45,000 word novel, usually with a deadline of one week.

Fanthorpe wrote 168 books for Badger between 1961 and 1967, dictating his tales into a reel-to-reel recorder and sending the tapes into the publisher’s typist. Often he’d stay up late into the night, covering his head with a blanket so he could concentrate. The results were overwritten, padded, and compellingly bad.

The only biography of Lionel Fanthorpe, Down the Badger Hole by Debbie Cross, has long been out of print but has now been revised, expanded, and released as a free ebook on the TAFF website.

And what a book it is! Cross gives us generous helpings of Fanthorpe’s prose, including masterful examples of padding through repetition.

Take this passage in The Return.

Out there lay the great unknown hyperspace, unspoken, unsaid, unuttered, unseen and unbeheld, hidden and veiled, full of a thousand unrealised mysteries. Unperceived and unexplained, dark enigmatic mysterious, occult and unfamiliar, unidentified, unclassified and uninvestigated, the undiscovered greyness, the unexplored, uncharted, unplumbed, unfathomed canescence; untried and untested, unknowable, unforeseeable, unpredictable and yet men travelled through it.

He would often go into excruciating detail about things wholly unrelated to the plot, like describing every move of a chess game, or spending an entire page and a half on a character brushing her teeth. He was also a fan of the unlikely metaphor, as we can see in this verbose passage from The Alien Ones.

He suddenly felt that he was the supreme destroyer, the remover, the iconoclast, the nihilist and the anarchist. He was a wrecker, a destructionist, a spoiler, a saboteur, a defacer, an eraser, an assassin. Something of the wildness of the barbarian, the Hun, the Tartar and the vandal raced through his veins. He was the personification of the moth, the worm, rust and erosion – except that he was an accelerated personification of those agents of destruction. He was an instant corrosive, he was immediate mildew, lightning blight and instantaneous poison. He was an earthquake, a fire, a flood, a sword; he was gunpowder, dynamite and blasting powder. He was a human torpedo which wasn’t human any more.

One wonders if Fanthorpe was having a bit of insight when he wrote this in Radar Alert. “Ken Andrews suddenly gave vent to a completely meaningless string of gibberish, which bore about the same resemblance to human speech as chalk bears to cheese. It was a singularly odd sort of noise.” 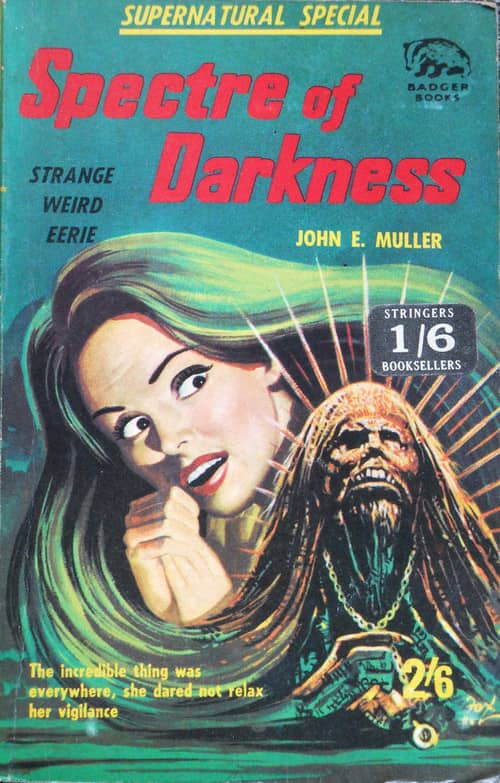 While some of his books appeared under his own name, most were under house names such as Pel Torro and Karl Zeigfreid. For the Supernatural Stories line (which always had the tagline STRANGE WEIRD EERIE on the cover) Fanthorpe would often be responsible for every single story, using a different house name for each. Cross has done a great job figuring out which titles can be assigned to Fanthorpe, when in some cases even the man himself is not a hundred percent sure if he wrote a particular story or not.

Any coverage of Badger Books would be remiss if it didn’t mention Fanthorpe’s partner in crime John Glasby. Between them they wrote the bulk of the company’s output. Glasby is less well known today, perhaps because he wrote less in science fiction and more in Badger’s other lines. He pretty much was the war stories line for a number of years and also wrote spy stories, Westerns, and 34 hospital romance novels. His obituary in the Telegraph is full of interesting information. 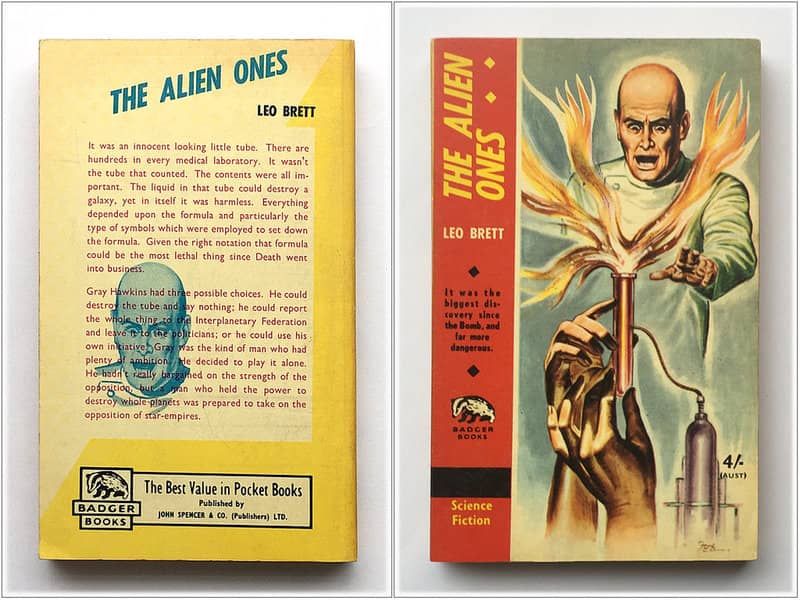 One thing I would like to have seen in Cross’s work is how the public reacted to this tidal wave of dubious prose. Badger Books churned out hundreds of novels in a wide variety of genres and kept up that production for more than a decade. Obviously people were buying them and coming back for more.

What was the appeal? I’d like to see some contemporary reviews of these books. Obviously they hit some sort of nerve then, just as they continue to do today.

Who knows? Perhaps Fanthorpe’s achievement all those years ago will inspire a new generation of ultrafast writers. As he said in No Way Back, “The past was the mould into which the plastic present was poured to solidify into future possibilities.”

So check out Down the Badger Hole, you won’t be sorry.

Sean McLachlan is the author of the historical fantasy novel A Fine Likeness, set in Civil War Missouri, and several other titles. Find out more about him on his blog and Amazon author’s page. His latest book, The Case of the Purloined Pyramid, is a neo-pulp detective novel set in Cairo in 1919.

The gentleman on the cover of The Return looks EXACTLY like someone who has just finished writing a novel over a three day weekend. I love realistic touches like that!

Many thanks for the encouraging review. But as webmaster of the TAFF site I’d appreciate it if you could link to the official book page there (which offers multiple download formats) rather than directly to the PDF only:

A couple of small corrections. Down the Badger Hole is not a biography (though it includes a bibliography). The 1995 paperback edition is not out of print and can still be bought from the publisher — as linked from the above page, another reason not to bypass it.

If anyone is interested in tracking it down a few years back BBC Radio aired a documentary about Reverend Fanthorpe called (if I remember correctly) “The Priest, the Badger, and the Little Green Man” (or maybe “Men”). Also, along with many tv appearances, he served as host of the “Fortean TV” series in the nineties.

Thanks for the corrections. And — especially! — for doing all the hard work of maintaining the TAFF site. it’s a terrific resource.