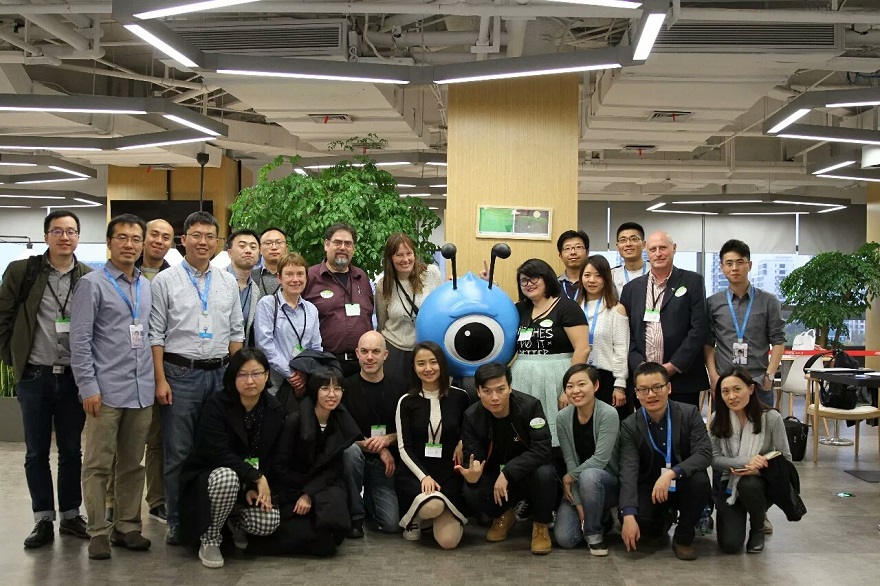 As a writer, I don’t usually suffer from imposter syndrome, but some wonderful moments can appear from nowhere and blindside me. My latest such moment came via The Future Affairs Administration, a new online Chinese SF magazine (imagine a Chinese Lightspeed or Clarkesworld).

FAA partnered with Ant Financial to fly 9 scifi writers into Hangzhou to learn about Ant Financial’s high-tech financial operations and some of what they’re dreaming about for the future, in the hopes that we writers would each write a scifi story inspired by what we saw. It was pretty cool.

A cool poster made in anticipation of our visit

Hangzhou is the Silicon Valley of China, and is home to Alibaba (sort of like China’s Amazon), which at one point spun off a high-tech financial services company called Ant Financial. A while ago, Alibaba had seen that many hundreds of millions of people were without financial services that many people in urban settings take for granted, like credit cards, bank cards, internet banking and an ability to buy things online they can’t get locally.

This may sound like not a big deal, but try getting a hotel or a airline flight without a credit card, or even feeling secure about your savings without a bank. Part of the reason these people did not have financial services was because each person individually didn’t have a net worth that would make banks and their loans and service fees profitable.

But, most people in China have smart phones. I saw the same phenomenon in Cuba and Colombia – where countries haven’t finished building the infrastructure of phone lines, etc, cell phones become the default telecon device. In 2000 when I moved to Colombia, more Colombians had cells phones than Canadians did. 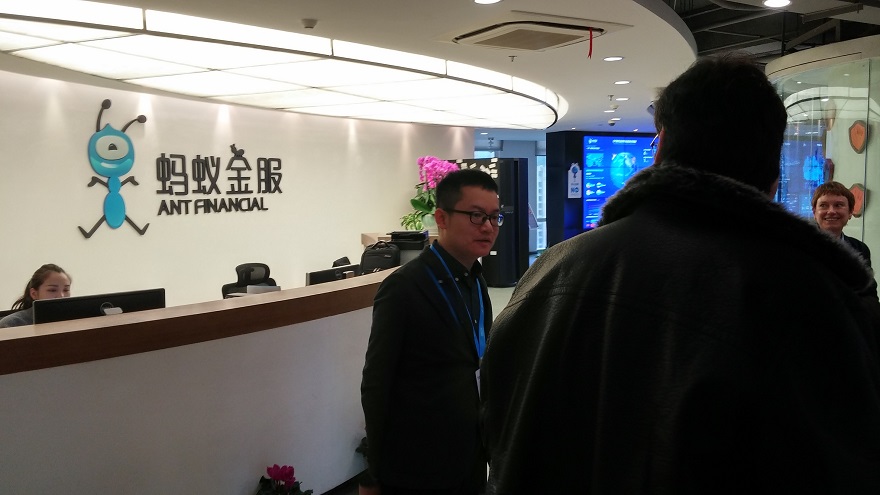 Getting a tour of the Alipay HQ

Alipay is operated by Ant Financial and has evolved from a payment app to a lifestyle platform, a one-stop app to access a bunch of services, from paying the utilities to unlocking shared bikes that are on every street corner every time you need a bike. And since they didn’t need to build brick-and-mortar banks to do this, and since they could automate most transactions, they could offer services at a fraction of the cost that banks could. So, this opened up markets that banks couldn’t afford to reach.

This is kind of neat, because once they had financial histories for their millions of clients, they could start offering loans or short-term loans or micro-loans. Now, this sounds kind of big brothery at first blush, but if you’re reading this blog in Canada or the USA, our financial information is already held by our banks and shared with credit bureaus. So this is not much different.

Except that there is a development angle here too. Micro-loans are a powerful tool for alleviating poverty. Micro-investment in livestock or seeds or tools has been proven to jump start lots of economic activity. So Alipay has automated micro-loans within the apps, and even does super-short-term loans.

Why would those be important? Say a merchant knows a big shopping day is coming and needs extra stock because she knows she’ll sell out. She gets a loan for a week, buys the stock for the festival/sale/holiday and is able to pay back the loan almost right away. So, automated lines of credit via app, with no bank in the way.

I obviously like a few things about what Alipay does, partly because I’ve been in or around development work for portions of my professional life. Also, while I was there, Alibaba announced the establishment of a big anti-poverty fund in which Ant Financial has a role in tackling poverty relief from an environment restoration angle, which I thought was cool. 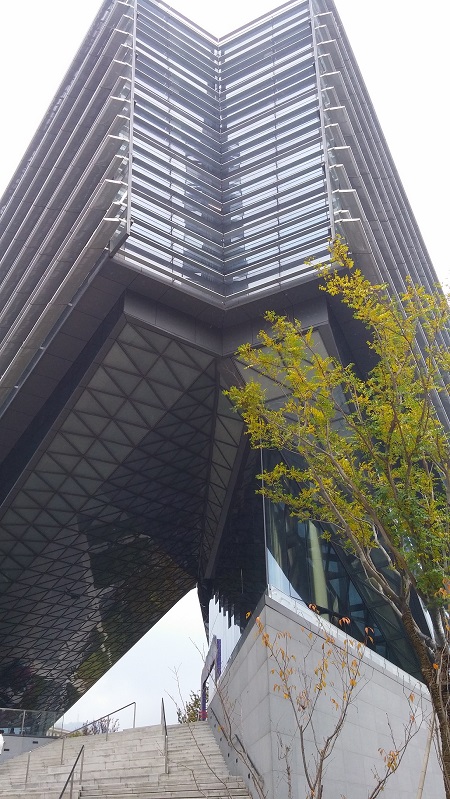 I love the architecture in China. The Alipay HQ didn’t let me down in that department.

But the tech side was more interesting, in part because I wasn’t familiar with all the ins and outs of providing financial services, or how much of the future promised in Star Trek and scifi literature had already arrived.

I loved meeting with their AI people. I can’t say that before this I really understood what an artificial intelligence is or does, but obviously if Alipay automates most of its service provision, it needs more than just dumb algorithms. I did learn that (paraphrasing here…) an AI is a program plus matrices of data wherein linkage arrows get placed via a process of machine learning or deep learning. It’s a fascinating process and I’m going to read more about it.

We observed a pilot project at a local restaurant where the public is trying out Smile-to-Pay, where a picture of your face is taken and facial recognition matches you to your Alipay account (because you previously registered for this with a photo or by taking a selfie) through 600 different facial features. Imagine a future where you don’t need to jump through so many hoops to prove who you are. 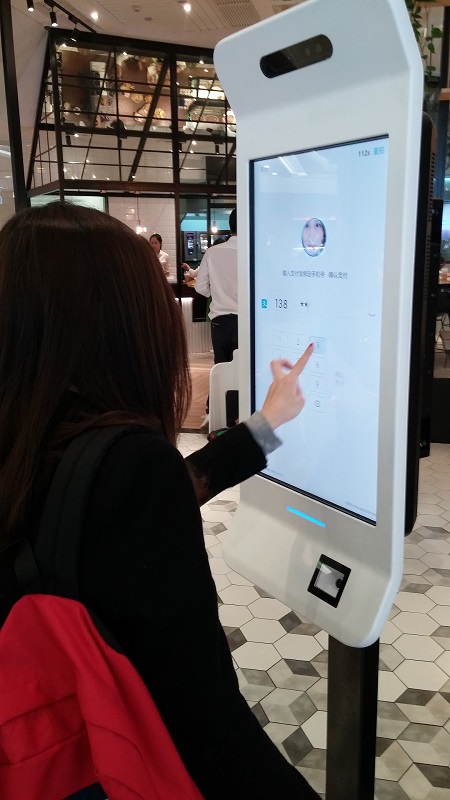 Smile-to-Pay in action, buying me supper

This is not a trivial problem. How much time do I spend in situations where I have to prove who I am? I was at the bank yesterday and some poor lady ahead of me was showing document after document to the clerk, trying to establish who she was because her main ID docs weren’t on her. Several western companies are experimenting with this through blockchain systems, because the establishment of identity is a friction to the economy and just getting along in life.

We also talked with Alipay’s security head, and I learned way more about credit card security, but what was fascinating was what can be done to secure phones as payment devices. For example, say someone steals your phone and the password has already been entered.

The thief’s behavior is going to be different from your own. The thief will try to keep the phone open a long time because maybe they don’t have the password. They’ll check what apps you have and your bank account totals. Then they’ll shop at a bunch of places you normally don’t.

AIs watch for these kinds of patterns and start red-flagging things right away. What blew my mind is that with touch-screens, phones already know much pressure you use to touch the icons and letters on your phone. If the pressure the thief exerts is different enough from your history, this can also red-flag something for Alipay, preventing the phone thief from getting much.

And say the phone has red-flagged a transaction about to happen. What can Alipay do? Well, since the purchaser is holding the phone, the automated services can send a text and prompt for a PIN. Or it could ask the purchaser to send a quick selfie.

We also talked to the F-Division, where F can stand for a number of things, including Future and Financial. We saw five things (five also starts with F) Alipay is working on, but those weren’t all for public release, so I’ll just say it was cool and show a picture of a member of F-Division showing Australian scifi author Samantha Murray some of the Virtual Reality features Alipay is prototyping for online shopping in China. 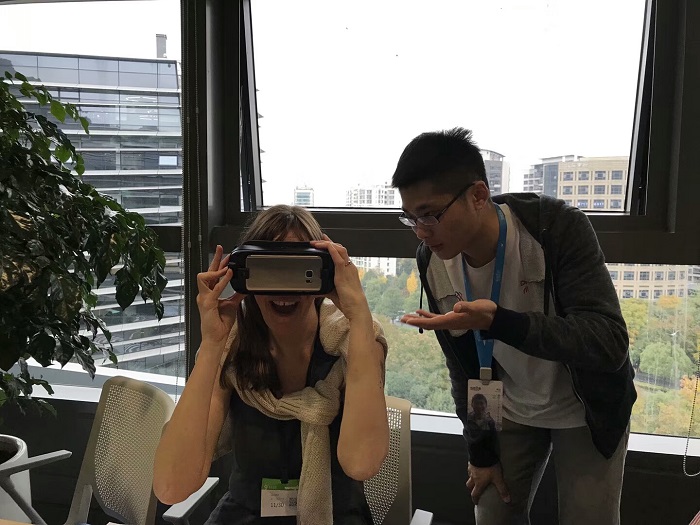 They also showed us new tech for speeding up restaurant service – where your table is basically a giant touch screen iPhone. Cultural note: In China, wait-staff don’t get tipped, and restaurant service can sometimes be sub-stellar, so it’s perhaps not a surprise that a table that puts more control at the diners’ fingertips would be prototyping in China rather than in Canada, where service is on average pretty good. 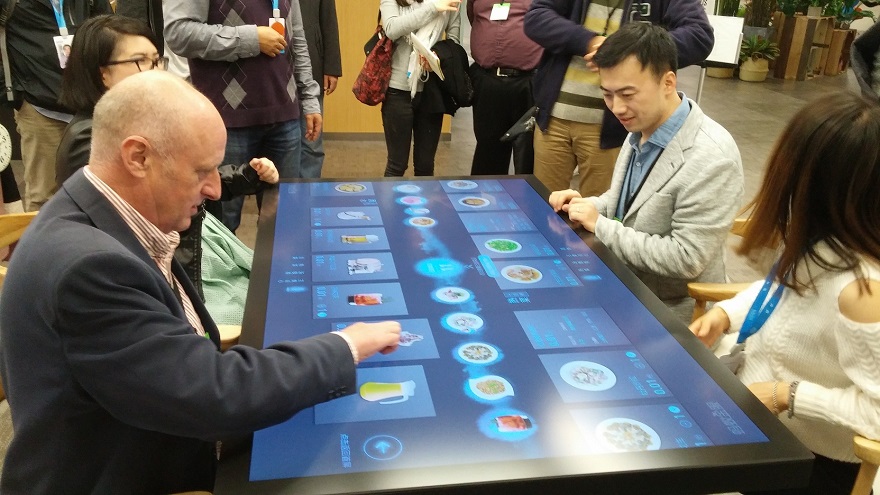 On the last day, we saw Alipay in action in what I would call a farmer’s market, but may be called a fresh food market in other places. Basically, the fish, eels, turtles, crabs, etc are all still alive and fresh, as are the fruit and vegetables, so it’s the last place you’d expect high-tech payment to work, but as you can see in the picture below, every merchant had QR code beside their stall and all payments were done by phone. 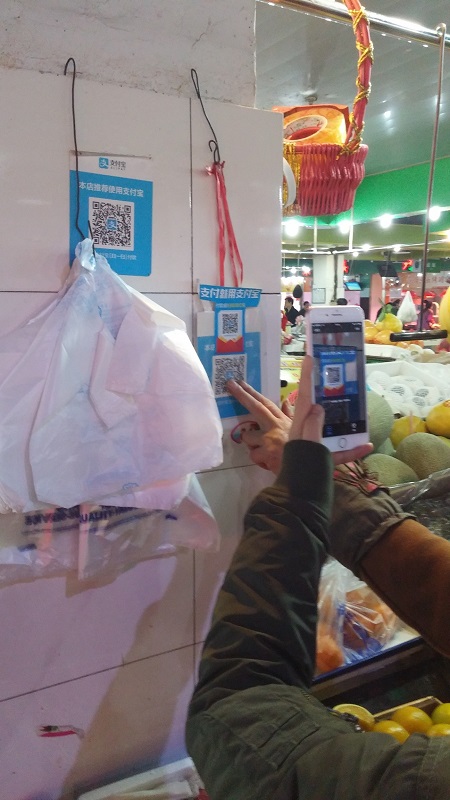 We followed this with a stroll around West Lake and a visit to a tea house in tea farming country. Interestingly, while on the walk, I needed some caffeine (jetlag) and tried to buy a Coca Cola. My Chinese hosts were somewhat proud that the vendor didn’t have change for my Chinese bills, because, this being Hangzhou, why would they bother if they had Alipay? So, one of my hosts Alipayed by coke. Apparently Hangzhou is almost cashless already. 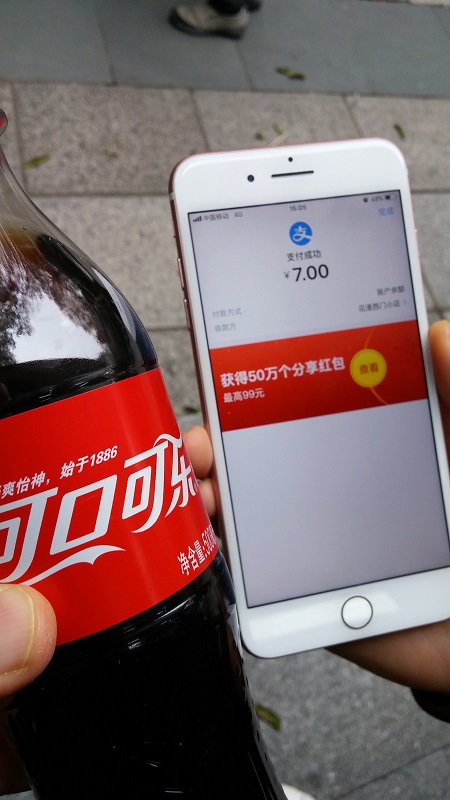 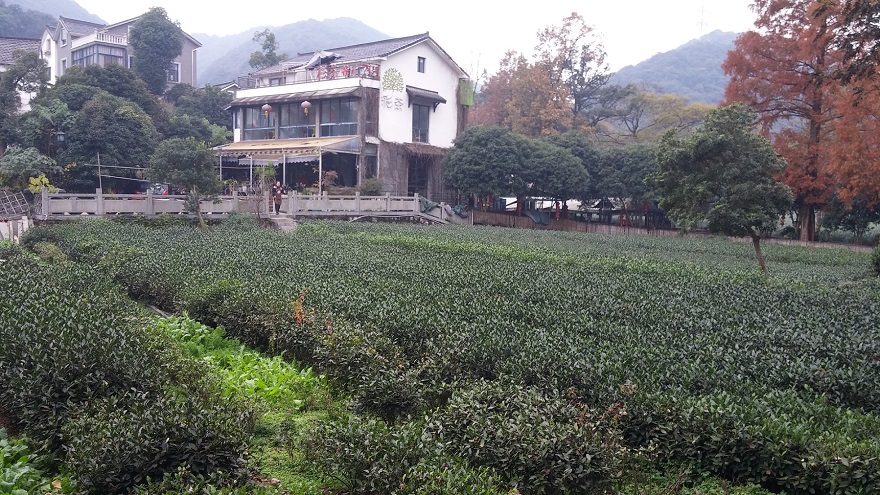 The beautiful tea house where we had lunch…. 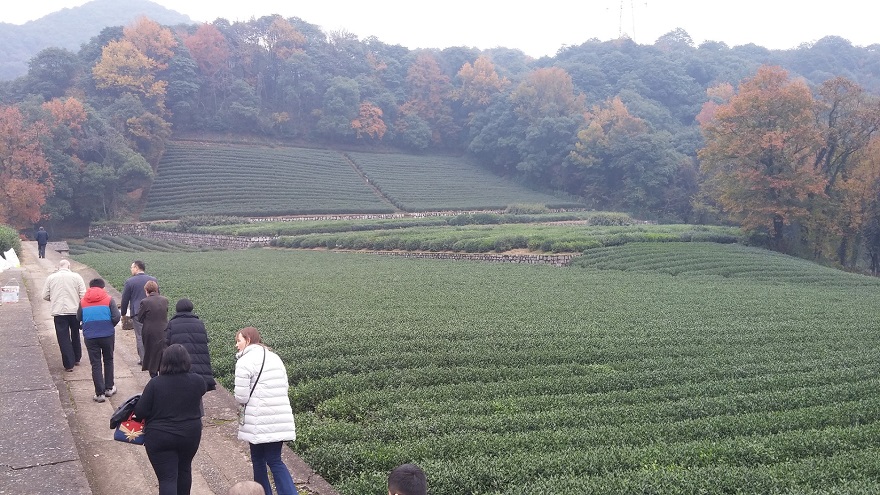 …after a walk in the tea fields

In the afternoon, we took a boat out to the middle of West Lake to have a conversation between western writers, Chinese writers and Chinese editors about how to get more people interested in reading SF, and how to encourage more Chinese writers to write SF. It was a fascinating conversation, especially happening only 2 weeks after I saw how much public support scifi was getting from the tech firm Tencent, the mayor of Chengdu, and the governor of Sichuan (see my post on my visit to Chengdu for more on this). 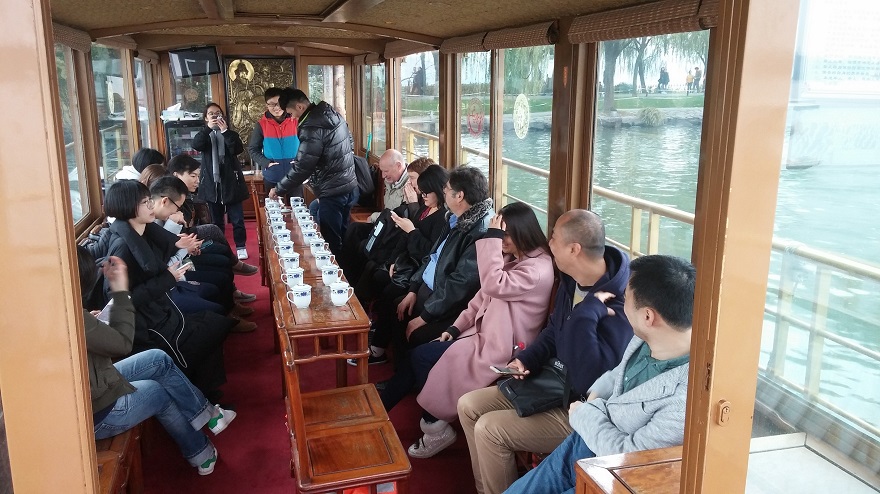 Our visit to Alipay even generated some local press coverage. The Xinhua Agency reported in English, and The Paper published one here. The second one is in Chinese, but Google translate isn’t bad if you’re curious. I found it neat that the simplified Mandarin version of my name was transliterated 5 different ways by Google translate. 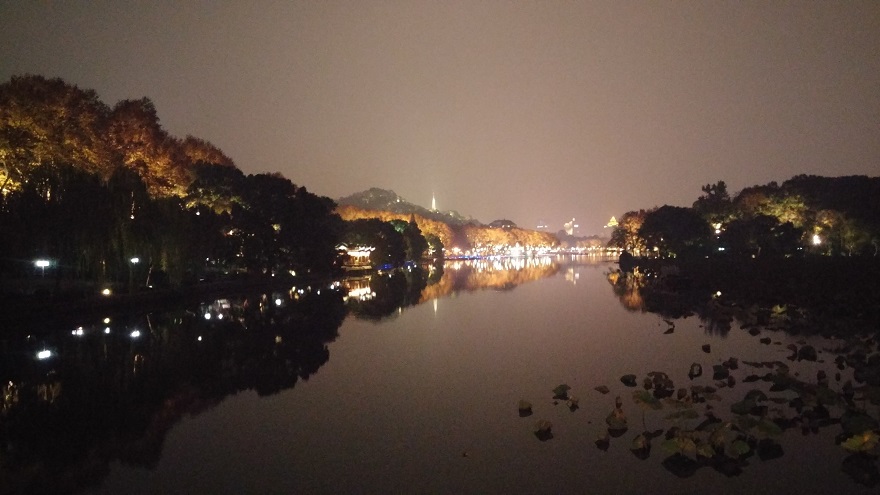 Part of West Lake at night

I saw a lot of new tech on the trip and took it as my goal to think about how this will change society and how we interact. Touch tech and automated banking and facial recognition have been examined by SF writers for decades, both the Utopian and Distopian possibilities. What stuck with me the most as an overall issue for the future is privacy. We already have far less privacy than our parents did.

The digital stuff I saw, which looks sometimes miraculous (although I could use my phone to pay for lots of things in Canada) is like all technology, and whether it is good or bad depends how it’s being used. Canada’s Privacy Act dates to 1984, with a few updates, and I don’t know of very many legislations anywhere that are capable of keeping up with the rapid changes in what privacy means and what people expect in terms of privacy. With cameras all over London, New York and Beijing, what does this mean for me?

Google has my data. Facebook has my data. Plenty of Fish has my data. My banks and Canadian credit aggregators have my data. I could pretty much be tracked round Gatineau and Ottawa by my credit card purchases, and cameras are in most places I go. I tend to trust the government to mind my data, but I honestly have no idea what private companies are doing with it.

Given that China is racing into the digital and industrial age with everything, so China too is experiencing the erosion of privacy as we’ve been experiencing for some time in the west. I think that citizens of the world are going to have to come to grips with what they want from privacy protections and those citizens are going to have to make their politicians deliver them those protections.

So now, back to writing my story for FAA!

Derek Künsken writes science fiction and fantasy in Gatineau, Québec and tweets from @derekkunsken. His first novel The Quantum Magician is being serialized right now in Analog Magazine (starting with the Jan/Feb 2018 issue) and in SFWorld in China (starting with the Nov, 2017 issue). The novel will be out in English book format in Oct 2018 by Solaris.