Two weeks ago I wrote a quick piece on Otto Penzler’s latest anthology, The Big Book of Rogues and Villains. I dashed off a list of the previous Penzler books we’d covered over the years… and I realized to my dismay that we’d somehow overlooked one of my favorites, The Big Book of Ghost Stories, an 836-page treasure trove released in 2012. I figured the time was right to rectify that oversight.

Otto Penzler’s The Big Book of Ghost Stories largely focuses on classic tales. No one should go through life (let alone death) without experiencing W.W. Jacobs’s “The Monkey’s Paw,” Perceval Landon’s “Thurnley Abbey,” Ambrose Bierce’s “The Moonlit Road” and M.R. James’s “Oh, Whistle and I’ll Come to You My Lad.” But Penzler also includes many stories that should be equally well known. This year, for instance, I read for the first time Ellen Glasgow’s “The Shadowy Third,” a wonderfully ambiguous tale of a nurse hired by a charismatic doctor to care for his apparently demented wife. Yet Mrs. Maradick is strangely afraid of her handsome husband, and there is something odd about her silent young daughter. Glasgow’s narrative is deeply haunting, in more ways than one.

Penzler stresses that he has “tried to remain true to the notion that ghosts are spirits or specters of the dead. Some stories that frequently have appeared in other ghost story anthologies have nothing at all to do with ghosts. They may be trolls, or evil plants, vile fungi, monsters, or other creatures of that ilk. Rightly or not, I have attempted to be a bit of a narrow-minded purist about it all.” This means that there is nothing here by Arthur Machen, who specialized in ancient and malignant races lurking in the Welsh hills, while Algernon Blackwood is represented by “The Woman’s Ghost Story” instead of his masterpiece, “The Willows.”

Penzler breaks the 79 stories into 13 categories, including humor, classics, haunted houses, and more.

I Must Be Dreaming
“The Dream Woman,” Wilkie Collins
“The Adventure of the German Student,” Washington Irving

The Female of the Species
“The Woman’s Ghost Story,” Algernon Blackwood
“The Angel of the Marne,” Victor Rousseau
“The Shell of Sense,” Olivia Howard Dunbar
“The Avenging of Ann Leete,” Marjorie Bowen

The book also includes a nice selection of vintage illustrations, by Virgil Finlay and others, chiefly drawn from pulp sources. The art is well reproduced and shows up surprisingly well in my paperback copy.

The Big Book of Ghost Stories is a veritable feast for anyone who loves a good spooky tale. It gets my highest recommendation. 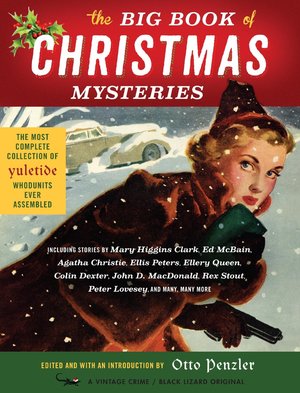 Otto Penzler has assembled a rich assortment of oversized anthologies, all focusing on genre fiction. He’s produced roughly one per year since 2007. They include:

The Big Book of Ghost Stories was published by Vintage/Black Lizard on September 18, 2012. It is 836 pages, priced at $25 in trade paperback and $15.99 for the digital edition. The cover was designed by Gregg Kulick.

See all of our most recent book coverage here.

It’s a terrific anthology, as all these Big Ottos are. I just pulled it off my shelf a few days ago – it’s almost time to pick the 2017 Christmas ghost story!

I hadn’t realized until I made the list above that he’s been doing precisely one per year since 2012. That’s faster than I’m reading them!

“Isaac Asimov and James MacCreigh” are of course Asimov and Frederik Pohl.