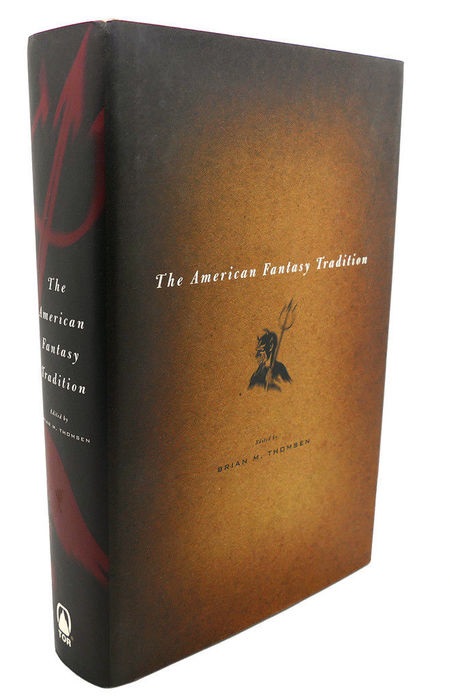 Brian Thomsen’s first anthology was Halflings, Hobbits, Warrows & Weefolk: A Collection of Tales of Heroes Short in Stature, a 1991 Questar paperback co-edited with Baird Searles. He followed that with more than a dozen more over the next 20 years — including The Reel Stuff (1998), Oceans of Magic (2001), and Masters of Fantasy (2004) — most co-edited with Martin H. Greenberg. He was the Senior Editor of SF and Fantasy at Warner Books and then Director of Books and Periodicals at TSR, where he wrote several Forgotten Realms novels, including Once Around the Realms (1995) and The Mage in the Iron Mask (1996).

The American Fantasy Tradition is one of the finest survey anthologies of Western fantasy ever assembled, and it would serve as a splendid textbook for any introductory course to modern fantasy. It stands with David Hartwell’s The Dark Descent, Gardner Dozois’s Modern Classics of Fantasy, and Jeff and Ann VanderMeer’s The Weird as one of the essential texts of the fantasy canon.

Thomsen dropped out of a Ph.D. program to pursue a career in publishing, and it’s not hard to see The American Fantasy Tradition as a de facto doctoral thesis on fantasy. The core concept is actually pretty intriguing — Thomsen describes American fantasy as falling broadly into three categories: The tall tale, stories that draw on the landscape, and stories that attempt to capture the American spirit. A more complete summary of his overall thesis was contained on the inside jacket flap:

From the ancient tales of long-dead civilizations to the wild success of J. R. R. Tolkien’s Lord of the Rings, fantasy has fired our imaginations for as long as there has been story. Whether sweeping sagas of fantastic adventures or cautionary tales told around the campfire, fantasy is deeply woven into the very fabric of humanity, wearing many faces and coming in many flavors. But what fantasy is distinctly American?

The American Fantasy Tradition sets out to answer this very question. This comprehensive critical anthology of American fantasy literature applies the groundbreaking theorems of such esteemed American literary critics as Leslie Fiedler, Richard Chase, and Irving Howe to the genre of fantasy in an effort to delineate the true American tradition of fantasy from the more prominent Anglo-European canon, breaking it down into three distinctive strains:

Stories that might be considered fables or legends, much like the epics of the Age of Heroes from the classical eras of Rome and Greece, or the tales of the fairy folk from the European tradition, or the fables of Aesop.

Stories set directly within the American historic landscape, much as the Arthurian tradition is set within the confines of British history.

Lands of Enchantment in Everyday Life

Stories that involve what might be called the American spirit, focusing on worlds that exist in the shadows of our own, just beyond Rod Serling’s famous signpost for The Twilight Zone.

To support his thesis, Thomsen collected 43 short stories and novelettes, including a John the Balladeer tale from Manly Wade Wellman, an Alvin Maker story by Orson Scott Card, a Castle Rock tale by Stephen King, and many others.

Most of the stories within originally appeared in magazines such as Weird Tales, The Magazine of Fantasy & Science Fiction, Galaxy, Omni, and Asimov’s Science Fiction, and anthologies like Dark Forces, Dante’s Disciples, Whispers VI, and many others. But they are also drawn from more mainstream sources, such as The New Yorker, The Saturday Evening Post, Harper’s, Playboy, Cosmopolitan, Redbook, and others. Here’s just a few of the issues that contributed stories to this anthology (click for bigger images).

Here’s the complete Table of Contents, with original publication source.

The American Fantasy Tradition was published in hardcover and reprinted a year later in trade paperback. Both editions are now long out of print; however, copies are widely available and very inexpensive. Amazon has hardcovers in very good shape for under $6, and eBay has brand new copies of the trade paperback for as low as $3.

The American Fantasy Tradition was published by Tor Books in September 2002. It is 604 pages, priced at $27.95 in hardcover and $17.95 in trade paperback. The cover was designed by Howard Gorssman.

I must say, the Ray Bradbury story is arguably an infelicitous choice. That’s the one Thomas M. Disch, in a famously scathing review, called “representative of mr. Bradbury at his worst”.

Thanks, John – I might never have known about this otherwise. I was luckily able to pick up a copy of this off Amazon just now. The used selection was quite good. I noticed Thomsen also has a holiday anthology available – A Yuletide Universe: Sixteen Fantastical Tales – that I think I need to read too. Tis the season…

[…] completely missed it. But John O’Neill of BLACK GATE reviewed The American Fantasy Tradition here and I immediately picked up a copy. Over 600 pages of wonderful stories! Yes, you could quibble […]