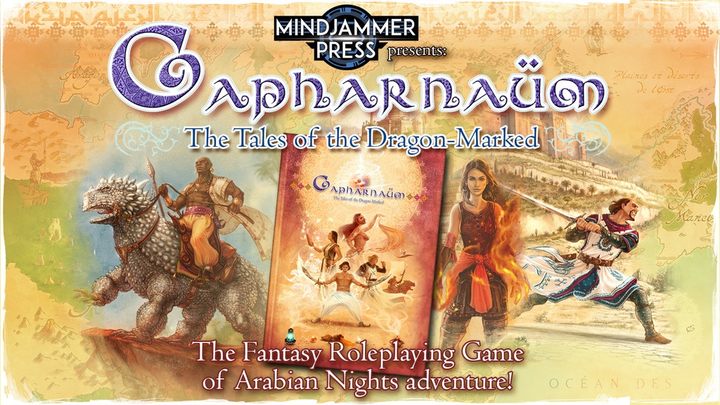 Two years after running our very successful Kickstarter for the transhumanist SF RPG Mindjammer, Mindjammer Press is back with a new project — the English-language version of a fascinating French-language RPG “Capharnaum – The Tales of the Dragon-Marked.” As a soundbite it’s billed as “a fantastic Arabian Nights RPG of deserts, dragons, and crusaders” — but it’s so much more than that. I first came across Capharnaum and its gorgeous artwork in the Paris Games Fair in 2009, and even then I couldn’t believe it hadn’t been brought to the English-speaking gamer. Now, with Capharnaum‘s second edition, the case is even more compelling.

The brains behind Capharnaum — The Tales of the Dragon-Marked are two experienced French game designers, Raphaël Bardas and François Cedelle. They’re joined by a large and extremely active gaming community based in Montpellier, the ancient town on the Mediterranean coast, but active throughout France, bringing together enthusiasts of ancient world Mediterranean and Arabian Nights-style gaming. In the aftermath of 9/11, Raphaël and François wanted to create a setting which refracted the cultural conflicts of our time in a historical-fantasy context, but which equally provided a gameplay which transcended those conflicts and offered a route to coexistence and appreciation of our diversity. 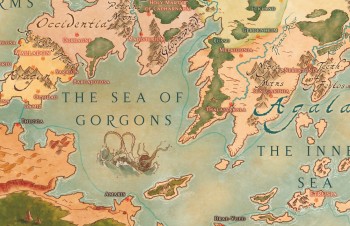 Capharnaum – The Tales of the Dragon-Marked is set around a fantasy “Middle Sea” — the game features some truly beautiful cartography – in which analogues of real-world historical cultures are juxtaposed in an anachronistic melee. There are the “Western” kingdoms of Aragon, Occidentia, and Orkadia, which refract Quixotic Spain, Merovingian France, and the Germanian lands of the Goths, Angles, Saxons, and ancient Scandia. There are the city-states of Agalanthia, which channels Atlantis through a prism of ancient Greece and Rome. There are the mystical kingdoms of Al-Fariq’n, which resonate with echoes of Zimbabwe, Ashanti, and Kush. And then there’s the peninsula of Jazirat, a fantastic analogue of the Arabian peninsula, with its Kingdom of Kh’saaba which brims with Sheban tones, and its Shiradim chosen people. All these peoples are thrown together in Capharnaum, in the north of Jazirat, a melting pot and crucible of history which flickers with conflicts refracting the Crusades, the Roman conquests, Hellenism, and the pre-Islamic Arab kingdoms.

It’s an action-packed yet mystical setting. Behind the overt forces of history, gods and cosmic dragons manipulate the world. In Capharnaum, you play characters who are “Dragon-Marked” — who bear a birthmark on their backs in the shape of a dragon’s claw, which marks them out for a mysterious yet unknown divine destiny. How you deal with that destiny — whether you take up arms against being a plaything of the gods, or whether you embrace your Fate and make it your own, reforging the world in your image — is one of the game’s unifying themes, together with the constant question: what do you do to deserve such a destiny? How can you live up to being chosen by the gods?

It’s a fascinating game concept. You have a setting which oozes with historical references, but which is deliberately constructed so that historical accuracy gives way to dramatic force, and every GM (called “Al-Rawi” — the “story teller”) and player can feel free to improvise within their own knowledge of our “Middle Sea” heritage. All of us have grown up with the Tales of the One Thousand and One Nights, the voyages of Sinbad, Aladdin, Ali-Baba, Sheherezade — but also of Jason and the Argonauts, Gilgamesh, Roland, Heracles, all of which find their analogues in Capharnaum. It’s a world of heroes-in-the-making, and of a world struggling to be born.

Naturally, the game’s rules sit hand-in-glove with this concept. In my own experience, French RPGs are very good at this. They generally start from a solid yet traditional base — narrative systems like FATE are still a novelty — but rapidly integrate tweaks and rules mechanics specifically designed to emulate genre tropes and bring out atmosphere. Capharnaum does this perfectly. It’s a modified roll-and-keep system of skills and attributes — if you know Legend of the Five Rings or Godlike, you’ll feel the affinities — but allows Dragon-Marked characters an exploding “Dragon Die” on their rolls. Triples and above “light up constellations” which permit the activation of special powers. And your heroic virtues of Bravery, Faith, and Loyalty will track your own behavior and allow you to achieve mighty feats. 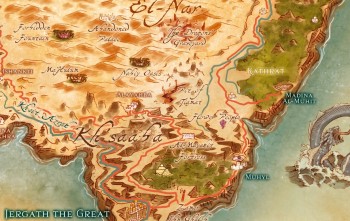 The magic system in particular is worthy of mention. It’s an improvisational system with a very solid underpinning. Called the “Tarmel Haja” (or “divine combinations” in Arabic / Saabi), it uses a linguistic / philosophical conceit: you combine one of three “Sacred Words” – Create, Transform, Destroy — which are philosophical rather than semantic concepts, together with one or more “elements” (essentially nouns, ranging from the concrete “man,” “sword,” “water,” to the increasingly abstract “dreams,” “love,” “obedience”) in a spell system which nevertheless has concrete and non-arbitrary in-game effects. It works very smoothly, and has customizations for use by the various game cultures, whether the Saabi, the Shiradim, the Agalanthians, or the “Quarterians” of the West.

In the Kickstarter, we’re proposing as our initial funding target to bring you the gorgeous 400-page hardback core book, which is roughly 1/3 rules, 1/2 setting material (histories, gazetteers, and some fascinating descriptions of the game world cultures), and a bestiary, GM guidance, and an introductory adventure. But we’re hoping to bring you much more than that: there’s a complete game line of a player’s guide, expanded bestiary, screen, GM companion, adventures, atlas, and a mega-campaign which subsumes everything that Capharnaum represents, in an epic arc called “The Kingdom of Heaven.” Mindjammer Press also has the rights to produce unique material in the setting, which I personally can’t wait to do! 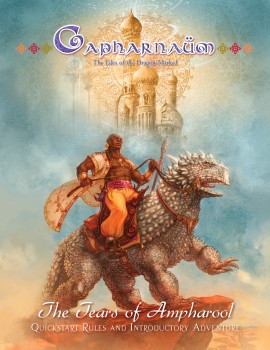 I hope you’ll take the chance to have a look at the Capharnaum RPG, at our Kickstarter page here. The campaign runs until the 17th December, and we’re 80% of the way to our initial funding target as of writing, and with your support many stretch goals to come. There’s even a free 44-page quickstart, The Tears of Ampharool, which introduces the rules and comes with pregenerated characters and a ready-to-play adventure set in the “Aramla El-Nar” Desert of Fire, to let you try before you buy.

It really is a special setting, profound and expansive, and one which I firmly believe should take its place in the pantheon of English-language RPGs. I hope you’ll join us, bear the Dragon-Mark, and change the world!

Sarah Newton is co-director of Mindjammer Press and author of Mindjammer – The Roleplaying Game, The Chronicles of Future Earth, Achtung! Cthulhu, Monsters & Magic, and much more, as well as various novels and short fiction. You can find her on Facebook at www.facebook.com/ShairaSu and www.facebook.com/MindjammerPress/. You can find the Kickstarter for Capharnaum – The Tales of the Dragon-Marked here. The campaign runs to the 17th December.