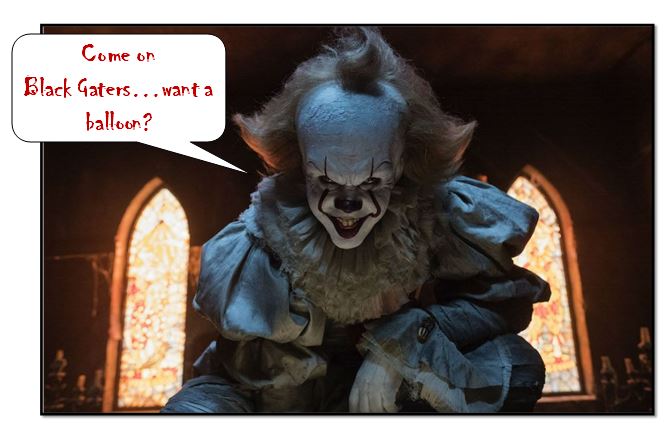 “One of the best horror movies of all time.” Umm…probably not.

Then again that was a quote from author Joe Hill who, if you weren’t aware, is Stephen King’s son.

Still, it was with immense anticipation that I was front and center for last weekend’s big screen premier of Stephen King’s IT. Just a reminder, though Tim Curry originally took on the iconic role of Pennywise the Clown, that was for the small screen, as IT was first a 1990, made-for-TV miniseries.

This fact was at least part of the reason why expectations were so high. The shackles of 90’s prime time sensibilities were completely off and the movie version of IT was free to scare the snot out of you in any way allowed within the boundaries of an R-rating, which is pretty boundless. And though director Andy Muschietti’s resume was short, it did include the fairly disturbing 2013 horror flick Mama. Add to this the first IT trailer that I got an early look back in the spring, which included the whole Georgie-chasing-his-paper-boat-into-the-clown-inhabited-sewer scene, and I was pretty much set to follow Joe Hill into the idea that IT 2017 may indeed be the real, scream-in-your-seat, deal.

The reality was somewhat less intense.

Muschietti’s vision is a good one and the casting of the kids who make up the “Losers” was spot on. It may just have been unfortunate timing and a failure to anticipate the mad success of Stranger Things that allowed Finn Wolfhard, whom we know best as Mike Wheeler, Hawkins’s best dungeon master, to also be cast as Derry’s resident smart-aleck, Richie Tozier. In fact, though the book IT predates Stranger Things by over thirty years, the vibe from the kid’s side of the story is incredibly similar; a group of geeky boys plus one girl, fights incredible evil that adults can’t wrap their brains around.

Bill Skarsgard was also an unorthodox yet awesome casting choice for Pennywise. Originally making his mark as yet another Skarsgard brother playing a hotter-than-should-be-allowed vampire (older brother Alex played Eric in HBO’s True Blood), the youngest Skarsgard first appeared in Netflix’s Hemlock Grove. His bruised, slightly unbalanced look was amped up a thousand-fold with all that creepy clown makeup, and the insane looks Skarsgard threw over the tops of his eyes were sufficiently goosebump inducing.

So if all that’s good, what’s my problem you ask?

Maybe nothing beyond an overabundance of hype and an expectation that could not possibly have been lived up to. Or it could be that even with a running time of 2 hours, 15 min, Muschietti still seemed to fall short when it came to capturing on film, the incredibly detailed and nuanced horror of the story that King originally wrote.

As you know if you come here often, I’m not in unconditional love with King’s stories; he’s written some great ones and some equally awful misses in my opinion. So just to be sure of my stance I started rereading IT, and at about the half-way point, I stand by my statement. What is scary about the novel isn’t the clown or the fact that pre-teens are the ones standing up to horrors that would flatten an adult, but the persistent and incessant building of inescapable terror over the course of time that gets you. By condensing the critical scenes from a 1138-page book into a two-hour film, the buildup just isn’t there, nor logically could be. 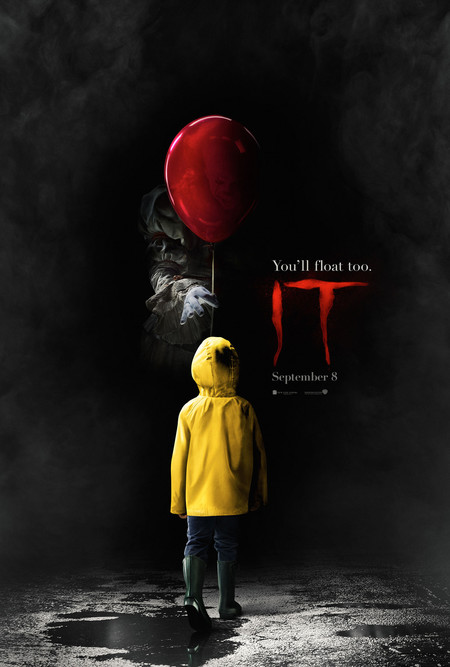 To be fair, IT 2017 is only half the story, literally. King’s novel bounces between the “Losers” as kids and the same group as now very successful adults who are compelled to return to Derry, Maine to fight the evil they thought they offed back when they were twelve. This current film covers the kid-side of the story and I’ve just learned the script has been completed for IT: Chapter II which will cover the adult-side. No filming details are available, but Muschietti will once again direct.

So, go for the acting and a few descent scares, even go for the nostalgia if you were a fan of the original TV version. Clearly a lot of people did since IT broke several box office records by its third day in theaters. But if you’re expecting a nightmare-inducing experience that will scar you for life… not so much.

In the end, tucking into season one of Stranger Things might overall, be more satisfying.

Have you seen the new IT movie? What did you think? Post a comment or drop a line to sue@blackgate.com.

Thanks for the review, Sue. I saw the movie with an open mind and really liked it. I didn’t have any baggage from the TV show, because I don’t think I’ve ever watched the TV series completely. The novel is one of the first books I really have memory of reading in the time of my life when I really got into books–around 12. It, the novel, and the Dragonlance Chronicles are the books that made me a life-long reader.

I agree a just-over 2 hour movie can’t really reproduce the book, but movie adaptations never can. This is why reading books and watching adaptations are separate experiences and not really comparable.

I haven’t seen Stranger Things yet so that comparison didn’t matter in my viewing of the movie. Look forward to Chapter II.

“One of the best horror movies of all time.” Well, it’s pretty much the quote from one of the best movie reviewers working too, and the one whose taste generally seems to most closely match mine, Richard Roeper.

I should add, I have no opinion yet, because I haven’t seen it. With a six-year-old in the house, it’s likely I won’t see it until it comes to Cinemax, Showtime, HBO, Epix, or ….

Gentlemen,
It is likely that where horror movies are concerned, I am a bit jaded but though it was enjoyable, I can’t prescribe to this version of “IT” being the scariest anything of all time. There were a lot of good things about the film, but in my humble opinion it fell short as was probably inevitable as Bert alludes to.

Allen – as the R-rating seems to have come from Richie “Trashmouth” Tozier’s liberal use of the f-word and one bloody bathroom scene that appears on the trailers, I’m not sure how long you actually need to wait. Of course, there is always the whole clown thing to consider…

Sue: Mr. Roeper didn’t say it was one of the scariest, just one of the best horror films. More specifically, he thought it was one of the best movies of the last few years in any genre. Your mileage obviously varies, but I’ll certainly give it a chance. Like (I suspect) Mr. Roeper, I probably value a horror movie less about how scary I find it—and to be honest, I rarely get scared anymore at any movie—and more about…well, what I value in any type of movie. (Also, I think it’s safe to say that Mr. Roeper is probably jaded about all types of movies. Or as his Twitter bio states, “Yes, I DID see [fill in movie title here].”)

As for waiting, that has more to do with how expensive it is to actually go *out* to a movie when we need to acquire a babysitter. Six is not yet into scary movies, and my wife doesn’t particularly like them either. (I think she still hasn’t forgiven me for taking her to see The Descent when we were dating. She did still marry me though. 🙂 ) Of course, given that, I could probably just go see it by myself, but I don’t have any problem waiting either.

Personally I’m getting allergic to re-makes. Also a bit sour what they did to “The Dark Tower” but don’t want to start talking there.

I’ll not flood with a large essay here – and I waited a while to type this to not troll -just observing – back in the 90s I read this book “Random acts of Senseless Violence” by Jack Womack – sort of a scifi or rather near future fiction of the USA going off a financial cliff. The main protagonist’s father was a movie scriptwriter but was reduced to college jobs when his employment dried up – the studios didn’t want new stories, they “Re-Released” old movies… Too afraid to take a risk and deal with a loss, they lived on the slow slide of their established stories.

Now, we have the same thing (along with a degrading economy) where studios are allergic to “New” stories and like to re-release old stories or when they have to crudely chew-n-spew Comic books. They spend 20x the budget of the original, even counting for inflation, make a beautiful CG picture – but totally butcher the story.

And they flop again and again – people are realizing they are having their childhood memories chewed up and excreted then given to them for more of their money – and they do it again and again.

a. Dystopia where movie studios are terrified of a loss in a bad economy and ‘re-release’ (released from the VAULTS…?) movies…

b. RL where in a depressed economy movie studios are terrified of a flop (or a writer demanding good $ for good stories?) and re-hash old stuff by re-making them with a high budget again and again…

Really, as writers we should be organizing boycotts of stuff like this. Why hire a writer when you can re-hash and have any hack strip the plot bare…