I’ve been a Saladin Ahmed fan for a while. I probably heard his first fantasy fiction at Beneath Ceaseless Skies with Mister Hadj’s Sunset Ride, or in Podcastle’s Judgement of Swords and Souls (click on the links for free audio versions). I also met him in person in 2013 when I ended up at the same table as him during the Nebula Awards Banquet (where his first novel had been nominated). 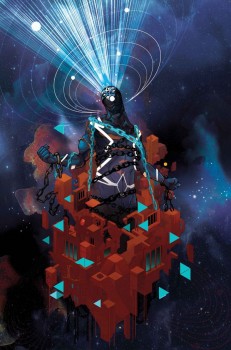 So I perked up when I saw that Marvel had Ahmed writing a new Black Bolt solo series. I picked up the first issue in June, put it in my backpack and promptly…. left it sitting in my TBR pile. For two months. And I didn’t even crack it open until issue #4 was already out.

Partly, this was due to the advertising. Marvel billed this as a prison break story, with Black Bolt and Absorbing Man. I imagined a buddy adventure, an odd-couple comedy, trying to break out of a space prison or in whatever they use in Marvel for the Phantom Zone. 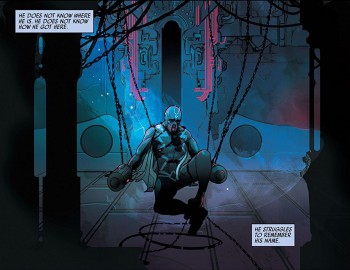 Essentially, I love Saladin Ahmed’s writing and kind of wasn’t sure how much I’d like the Black Bolt series (Absorbing Man? Really?). It’s not that Marvel’s quality worries me – it’s that Marvel has such a range of voices and markets (kung fu, snarky sorcerer, dark spy, young adult, etc) that it’s a mistake for me to assume I’ll like the entire line.

I should have opened it in the first week. I loved it.

Firstly, the voice takes the character and situation completely seriously. The regal tone and the silent tragedy of Black Bolt is in every page. 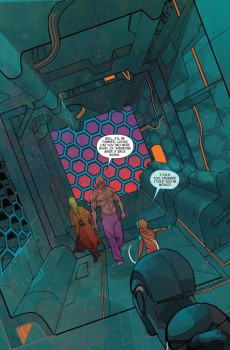 The voice is strong and heavily immersive, and in this regard, Black Bolt compares favorably to Warren Ellis’ Karnak (which I reviewed last year here). The writing is moody and compelling. 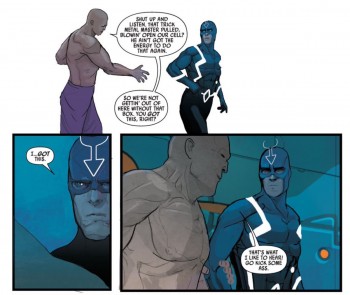 Secondly, the themes are strong. Black Bolt had intended to put his mad brother Maximus into this prison to keep the world safe, but Maximus beat him to the punch and popped him in here instead. And yet, it is not a normal prison. 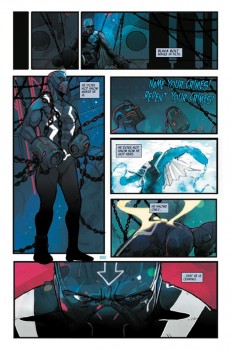 Prisoners are cruelly abused, and killed, and brought back so that they can continue to do penance at the hands of a mysterious jailer. And Absorbing Man, far from being a liability, is a powerful dramatic foil – he’s been in prisons a lot, both fairly and perhaps some less so. Using both characters (and a few others, non of whom are cliché) Ahmed asks questions about prison, guilt, and sins. And he’s doing it well.

Thirdly, Christian Ward on art is great. I don’t normally comment much on the art when talking about comics because I recognize that my grasp of layout, composition, perspective, color and all sorts of other things are not my expertise. 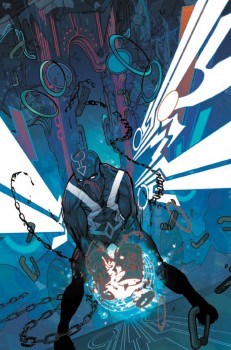 That being said, Ward’s art is evocative, powerful with really unexpected layouts and he creates a brilliant high-tech alien prison that’s just alien enough to be psychologically unsettling. 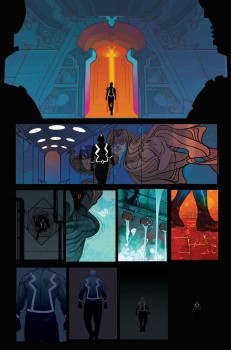 And it’s fun after having read a few issues to start teasing out the themes. The jailer in the beginning is yelling “Name Your Crimes! Repent Your Crimes!” This could be pure jailer psychological manipulation, but Black Bolt has a lot of sins. Which one really got him here?

My guess is that it was his very plan to put his brother in here, without knowing what it really was. But I could be wrong. Black Bolt isn’t king right now because of lots of crimes.

I’ve only read issues #1-4 so far, but I’m loving this book and will stick with it. I totally recommend it!

Derek Künsken writes science fiction and fantasy in Gatineau, Québec. He’s finishing up a hard SF novel for his agent this weekend. It’s a sequel to his 2014 Analog novelette “Persephone Descending” which concerned the new Québécois colonists living in the clouds of Venus. He tweets from @derekkunsken.

One of the interesting paradoxes of story creation is where a big company “Just throws money at” a small publication and doesn’t meddle in it that much. The artists, writers, actors, etc. are all trying to stand out in a very competitive market and amongst very talented peers. So they give it their best work and make stuff no board room full of banker’s reps could ever do.

I could list all day but here’s a few:

Kull – by Marvel in the 80s – bi-monthly series – had incredible painted covers worthy of heavy metal and deep, thoughtful stories but with plenty of Blood and Thunder.

Micronauts and Rom – the originals – just toy commercials the very good writers and artists realized they had to keep the show going or well they wouldn’t get paid, too many ‘arts majors’ after the 60s. So they made these long stories of adventure, love, and despite in other worlds and far away realms mirroring life and current issues in symbolic ways. Rom for instance dealt with the Vietnam war, still an open wound, as a solider from a massive destructive war (even justified) dealt with the loss of his humanity. They had a period of a year after the war when he journed the stars as a wanderer and they put in tons of neat science fiction stories, such as the war between human like creatures and the machines they created. Micronauts dealt with issues of dictatorship and fascism, but also love and spirituality. Pretty deep for toy commercials for toys no longer being produced?

I don’t include “Red Sonja” btw – that clearly was being watched every step. The artist, Franke Thorne, made a lot of literary parody making it clear that he had to ask permission to have Red sneeze when he went to Warren and made Ghita of Alizzar. If you can read between lines in story, check it out it’ll be a real laugh,
the “Unicorn” thing alone is worth it.
(GN’s are pricey but not insane on ebay though its all posted online and out of print if you want to look)

Last, but not least, on my too short list is Daredevil under Frank Miller. Daredevil was one of Marvel’s endless line of “Tokenism” – (let’s make a minority appeal character) and yes for a time the Blind were a marginalized minority with stereotypes and such. Frank Miller had wanted to go to Marvel to bring back “Crime” comics. They just intended to let him pay his dues on a 3rd rate D list superhero they might close anytime. He started with pencils but then they liked his stories he ended up writing the thing. He took “The courage of the Blind” to a whole new level, using an exxagerated New York (a lot more close to RL in the day) and a bleak world where the Hero would have to be blind not to curse it. Before Marvel could stop it it was out-selling Spider man being so good. The comics code had been broken by Marvel so they didn’t dare scream, fearing loss of their revenue, coz Miller managed to sneak in almost every Wertham trope in there.

So, while Spider-Man needs a corporate board of approval to swing up or down main street and every other issue might freak out on a new “Crisis of ultimate secret…” or become a “Clone of the Spider God” or lurch over in a recovered memory of being molested as a lad, look for the small publications, even from the big, bad ‘mainstream’ – once in a while they manage to sneak in a good story and often excellent art.

To add to GreenGestalt’s titles the 70s Marvel gave us Jim Starlin’s revamp of Captain Marvel and Warlock, Steve Gerber’s work on Man-Thing, Don MacGregor on Black Panther/Killraven and Doug Moench on Master of Kung Fu not mention Steve Englehart’s version of Doctor Strange. As to Black Bolt appreciate the review as frankly of all the characters Jack Kirby introduced in Fantastic Four I have never been able to get excited over the Inhumans. Can’t put my finger on it except perhaps they were too isolated from the rest of Marvel Universe. I admit I found the TV series trailer better then I expected which proves to me almost any concept can be a winner in creative hands–even (ahem) Dazzler.

Saladin Ahmed came out with one of the most interesting fantasy novels a few years ago (Throne of the Crescent Moon). It felt like that would be a continuing series. What happened? He sort of disappeared for awhile. Now he’s doing comics?

Typing jic anyone looks back – my list was criminally short, but I usually type a lot here.

I think there should be a seperate article on “Lesser known greats” from major publishers.

The “Rom” series the last year when Rom travelled the galaxy as a lone wanderer to find himself in getting lost after the war with Wraithkind was over would be worth an article here. On the surface it was to find lost space-knights to tell them the war is over. But he dealt with the loss of his humanity – and man’s issues with machines – esp Issue # 68 – and lots of the issues were good stand alone science fiction stories. And again Vietnam was a large still open wound on society and the writers were children of the 60s.