This is the 50th year of GenCon, “The Best Four Days in Gaming” convention, since its humble beginnings as a small convention of gamers in Lake Geneva. In what I believe is a first ever in Indianapolis, the convention is completely sold out, without offering any at-the-door purchase of badges. Fortunately, mine was waiting for me in the press room.

Over the years, GenCon has expanded to fill every available space in downtown Indianapolis. In addition to using the entire Indianapolis Convention Center, Lucas Oil Stadium (where the Indiana Pacers play baketball) now house the True Dungeon living dungeon crawl, the game library, and the Mayfair Games play areas, while tendrils of GenCon spread out into the ballrooms and meeting rooms of several hotels on adjacent blocks.

And with the rise of Kickstarter, there are more small, independent game companies than ever vying for attention, promoting not only their existing lines of products but also their upcoming Kickstarter campaigns. Trying to make sense of all of the different games is easiest if I try to tackle them by theme and play style, and one type of game that seemed prevalent on the first day of the convention were deck-building games with a fantasy theme.

We’ve covered several deck-building games in the past – Warmachine: High Command, Lord of the Rings: The Two Towers, Clank!, the Pathfinder Adventure Card Game, and both the DC Comics and Marvel: Legendary deck-building games (as well as at least one of the DC comics expansions). Generally speaking, these sorts of games involve each player beginning with a small deck of 10-or-so cards. The decks are usually identical, but sometimes there are differences. These low-powered cards are then used to earn new cards through gameplay, which provide more power. Part of the game also often involves eliminating the low-powered starting cards from your deck as you play, so that you have a higher probability of getting the more powerful cards you’ve purchased.

Players begin by picking a specific character from 16 options in the main box, representing standard D&D classes corresponding to either devotion (cleric), deception(rogue), arcane (wizard), or martial (fighter) classes. An expansion, Heroes of the Sword Coast also included another 32 starting characters, incorporating druid, ranger, warlock, and bard classes into the mix. The various starting characters get slightly different starting cards consisting of a mix of devotion, arcane, stealth, and martial cards to make up their initial deck.

Monsters show up to battle the members of the group, and defeating them requires having the right combination of these four traits. The game is fully cooperative, though, so if the fighter is up against an undead or dragon that need devotion or arcane cards to defeat it, they can get help from others in the party. As monsters are defeated, the characters gain gold … and then that gold that is used to purchase new cards from those available in the market. Players can buy any new card from the available set of cards, but there are certain synergies. A cleric (or other devotion class) will get more use out of a Cure Wounds spell than a fighter, for example. 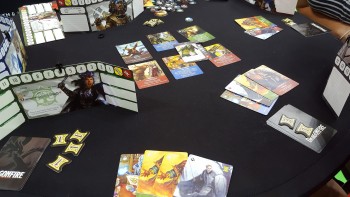 Using the campaign mode, players can evolve their characters between consecutive games in two ways. Upon completing adventures, they can earn magic items which get added to their character’s deck. In addition, they also gain XP which can be used to level up and gain additional features, represented by stickers that are added to their character sheets. For example, a wizard can eventually gain the War Wizard feature, which grants the ability to use armor and shields and to swap an arcane card for a martial card, or a fighter gains the Eldritch Knight ability, granting them some spell-casting bonuses, or they could gain the ability for extra attacks. A future expansion, Encounters: Dragonspear Castle, will provide additional adventures and leveling options.

This isn’t D&D‘s first foray into deck-building. Gale Force 9 last year released Tyrants of the Underdark, which applies deck-building combined with an area control mechanic. Tyrants released an expansion this year, adding Aberration & Undead monsters to the deck options. But for all its merit, Tyrants doesn’t feel like a traditional D&D game, with a diverse party of characters going through a series of adventures. If you’re looking for that experience, then Dragonfire is the game you’ve been wanting.

Upper Deck created the deck-building game Marvel: Legendary several years ago, and has since gone on to re-skin the game mechanics onto different intellectual properties: Aliens, Predator, Firefly, Big Trouble in Little China, and finally this year’s release of Buffy: The Vampire Slayer. (Amazon lists the official release of Buffy as September 6, though it is available for pre-order.)

The basic way that Legendary works is you have a variety of heroes, each with a set of 14 cards, and you randomly (or non-randomly) select five heroes you are going to use to make your hero deck. Then you choose from a variety of Masterminds, Villain groups, and Henchmen group cards to create a villain deck, which can also be modified based on the specific Scheme that the Mastermind is attempting to implement. You then buy cards revealed from the Hero Deck while trying to defeat cards revealed from the Villain Deck, all while trying to keep in mind the Scheme-specific rules to avoid defeat while you try to vanquish the Mastermind for good. In the games, these decks are built around established characters from the source material, so you can have in the Marvel game a hero deck consisting of Captain America, Captain Marvel, Wolverine, Hulk, and Black Bolt teaming up against the Mastermind Magneto who is leading the Brotherhood and Spider Foes, with assistance from Doombots, in his attempt to banish all heroes to the Negative Zone. If you’re a lifelong Marvel Comics fan, that’s likely a pretty cool sounding storyline to play out.

However, Upper Deck has made a bold move this year by creating their own unique intellectual property with an original fantasy setting, the land of Alamyth, to build a digital version of the Legendary game around. Legendary DXP features beautiful graphics and an intriguing array of heroes and villains. It is currently available through the Apple Store for iOS, but will soon be available also for Android and via Steam. The game is free to download, and all existing content can be unlocked for the reasonable amount of $5.

Last but not least, White Wizard Games has a deck-building games called Hero Realms, which is a fantasy variant of their popular Star Realms science fiction deck-building game. The cards represent different factions of fantasy creatures, and the player can recruit them to their cause to fight against the opposing player and their cards. Cards generate values based on either recruiting new cards or dealing combat damage to the other player (or to their cards), and many have special powers that activate, often in synergy with other cards that have been played.

The nice thing about this game is that it’s so straightforward. No piles of separate decks to keep track of, no tokens that have to be sorted, or leveling up to account for. The only cards that need sorted out are the basic starting cards. It’s a single small box of cards that you can use to start playing in a few minutes. Though it isn’t a new game, it’s a good quick deck-building game that is well worth looking into, if you’d like to have a physical game on hand without crating around a giant box. This one is merely the size of a couple of deck of cards and has a retail price around $20.

The game is expandable, with different character expansion packs that allow you to play with different sets of abilities as different classes of fantasy hero in the game. An upcoming campaign expansion is on the horizon, which will allow for cooperative play as well as the default competitive play over a series of related adventures. 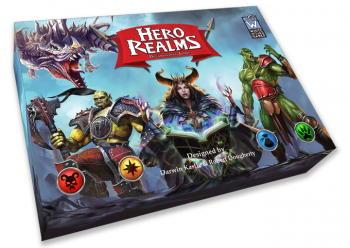 More to come, as we go from the realm of fantasy to considering what this year’s GenCon offers in the way of science fiction games …

Here’s another one currently at Kickstarter and being demoed (I hear) at gen con, though perhaps this is more of a storytelling game? I backed it. Might be fun to play someday with my littlest Viking, who is only 2 right now. https://www.kickstarter.com/projects/avalkauskas/vanagard