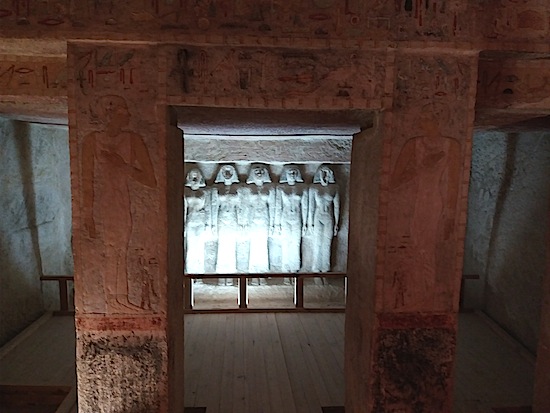 Interior of the mastaba of Meresankh III. The row of
statues shows the queen and female members of her family

Not everyone gets a pyramid when they die.

As nice as it would be for everyone to get their own massive stone monument that lasts for all time, it’s really expensive and the one percenters want to have something of their own that makes them feel special.

So for those of us who don’t get to rule over Ancient Egypt with an iron fist, but aren’t so poor that we’re stuck in a shallow pit in the desert, there’s the mastaba, a home away home where we can spend the afterlife.

Mastabas were rectangular buildings made of mud brick or stone containing a few rooms and a burial chamber beneath it reached via a vertical shaft. They were wonderfully decorated on the inside and had a place for making offerings to the dead. 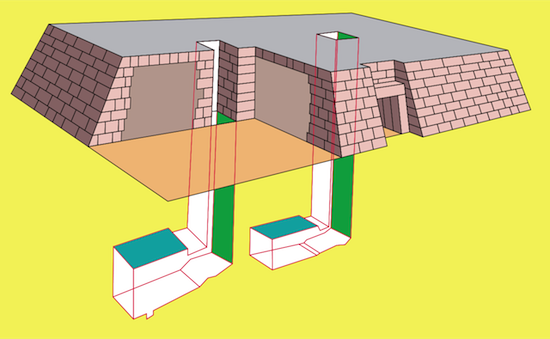 Schematic of a mastaba, courtesy Wikimedia Commons.
Below the mastaba are the burial chamber and the serdab,
a storeroom for grave goods

“Mastaba” is the Arabic word for “bench” because they look a bit like oversized benches. The ancient Egyptian word was pr-djt, meaning “house for eternity.” Mastabas started appearing in the Early Dynastic Period (3150-2700 BC) and continued through the Old Kingdom (2700-2200 BC). The very earliest mastabas contained royalty, even pharaohs, but after pyramids became popular in the Fourth Dynasty (2625-2510 BC) mastabas were used by lesser royalty, including queens not graced with their own pyramid, as well as high officials. Large numbers of mastabas can be found at the major burial sites such as Saqqara, Abydos, and Giza. 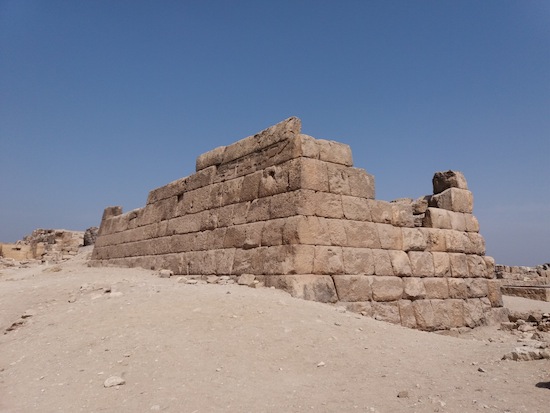 A mastaba from the Giza Plateau. Sadly
this is one of the better preserved examples

The form of the mastaba changed over time, with the earliest resembling houses with several rooms. Later mastabas had stairways leading down into rooms set somewhat below the superstructure, and then for added protection mastabas developed the burial shaft, placing the body beneath the rooms.

Mastabas gradually fell out of favor after the Old Kingdom and become very rare by the New Kingdom, having been replaced by rock cut tombs and small pyramid chapels.

Below are a series of photos of the mastaba of Meresankh III, wife of the Fourth Dynasty pharaoh Khafre. She did not get a small pyramid like some other Old Kingdom queens at Giza, but she got a beautifully decorated mastaba. Among the items found in her tomb are the earliest known set of canopic jars. 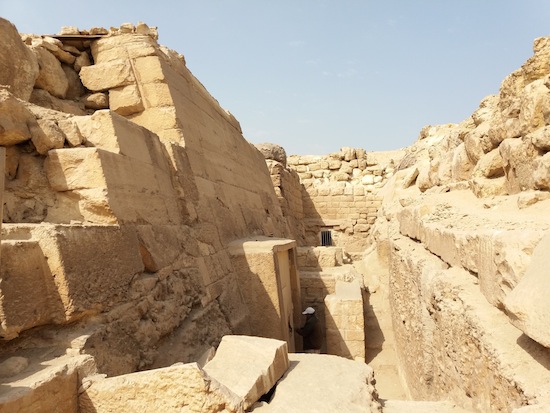 Entrance into the mastaba 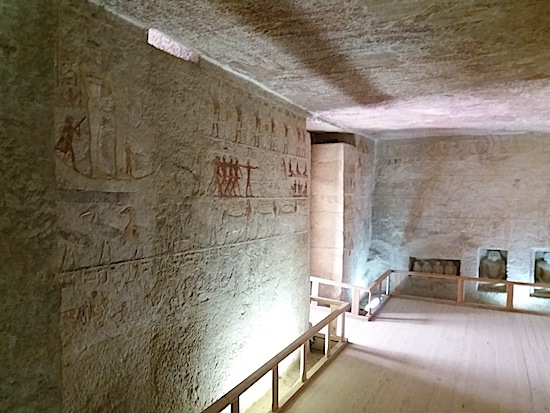 A general view of the main chamber, the walls covered
in bas-reliefs that still retain some of their original paint 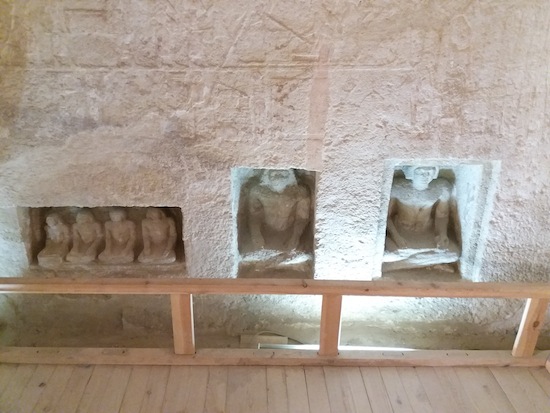 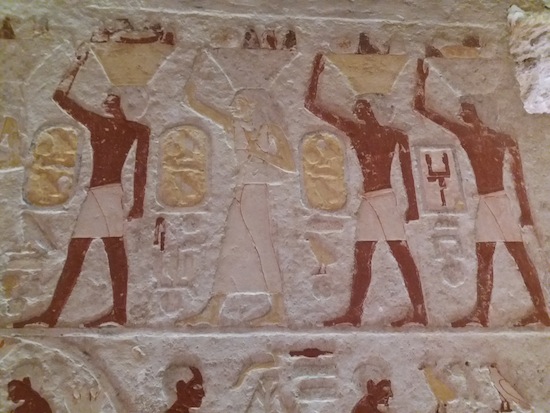 Bringing offerings to the deceased 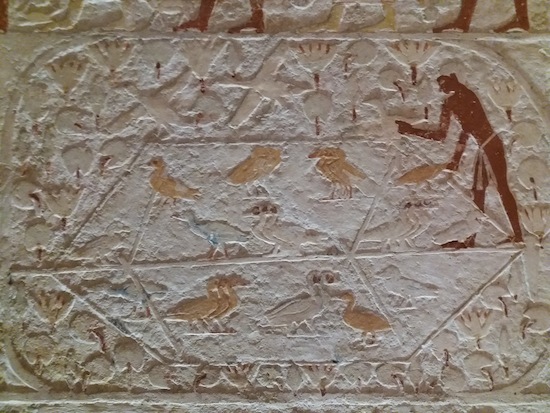 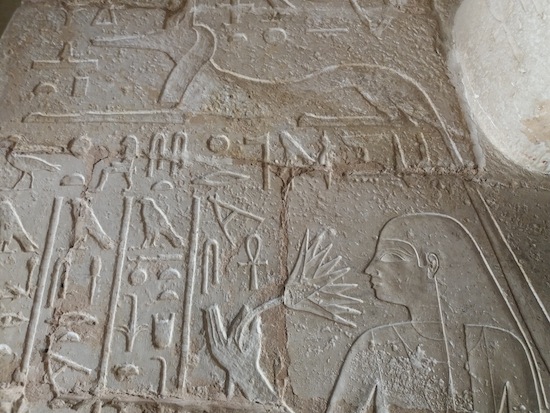 Meresankh enjoying the smell of a lotus while Anubis sits above 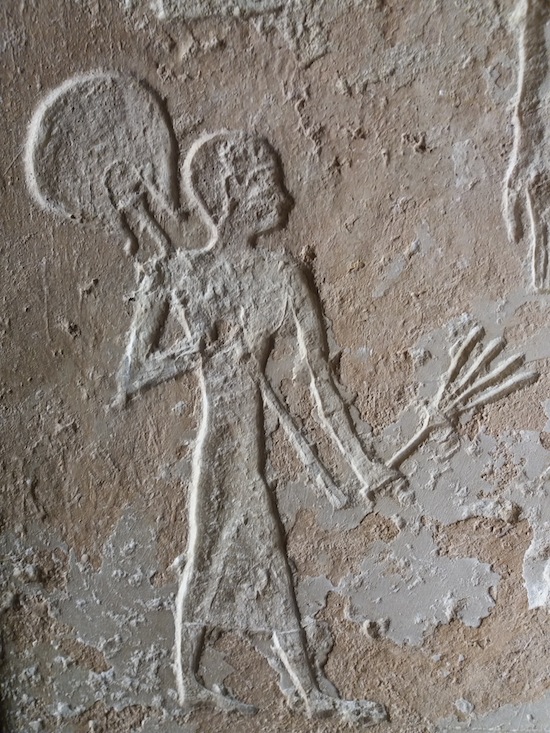 All photos copyright Sean McLachlan unless otherwise noted. More pictures of Egypt next week, plus many more on my Instagram account!

Sean McLachlan is the author of the historical fantasy novel A Fine Likeness, set in Civil War Missouri, and several other titles. His novel set in Tangier, The Last Hotel Room, examines the human side of Middle Eastern politics. Find out more about him on his blog and Amazon author’s page.