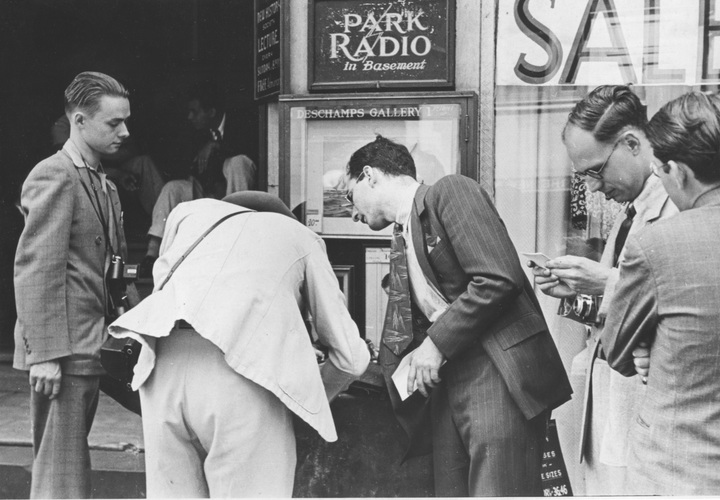 While letters from and to Otto Binder made up the majority of the correspondence I acquired from the estate of Clifford Kornoelje (aka in science fiction circles as Jack Darrow), Binder wasn’t the only science fiction notable that Darrow corresponded with. One of his other correspondents was Julius Schwartz, remembered today for his roles in both the science fiction and comics fields. I thought I’d post two of those letters from Schwartz — along with some related material — today.

The first letter from Schwartz to Darrow is dated December 12, 1932. The Mort that he refers to in several places is their mutual friend, Mort Weisinger. It has a mention of Astounding, a mention of a dinner that Schwartz (and presumably Weisinger as well) will be having with pulp author David H. Keller. And most particularly, it has an interesting bit resulting from an interview that Schwartz had conducted with A. Merritt two weeks earlier. I don’t know if Merritt actually sued Amazing, as Schwartz claims, or whether he just threatened them, but Amazing did run an apology in their June 1933 issue. 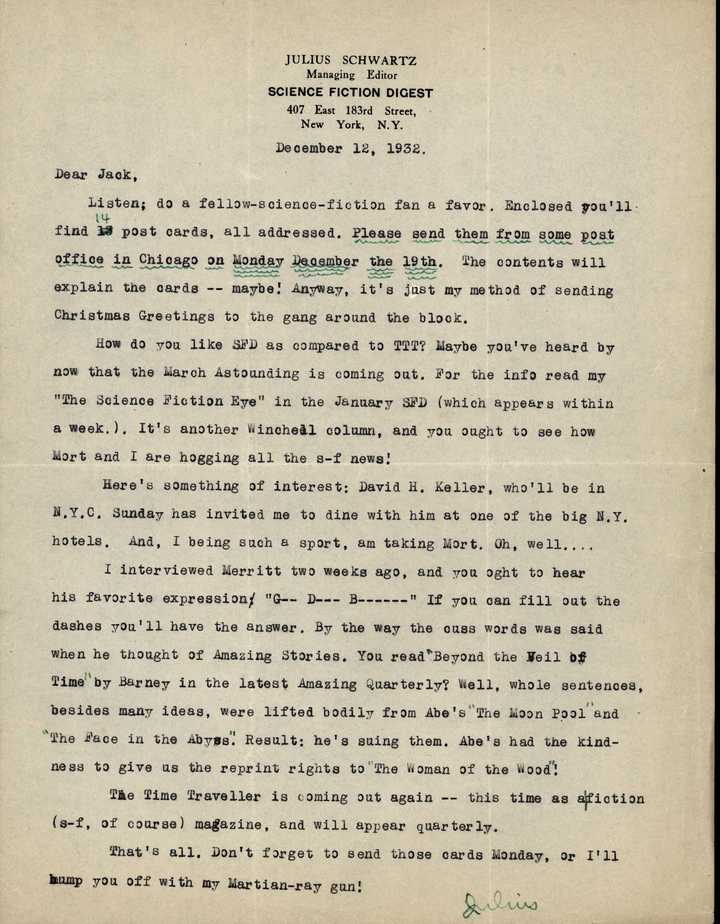 The SFD and TTT that Schwartz refers to are the early fanzines Science Fiction Digest and its predecessor, The Time Traveller, that both Schwartz and Weisinger were involved in. Others involved in those pioneering publications were Forrest Ackerman and printer Conrad Ruppert. Among the other material I acquired from the Darrow estate was a complete run of TTT in very fine condition. However, on one of his visits to our house, I made the mistake of showing the set to my friend, the late Jerry Weist.

Jerry was an enthusiastic collector of early fanzines, and once he saw it, he wanted that set! He finally made me a trade offer of some art for them that I couldn’t refuse. I was fortunate enough several years later, however, to acquire a second set of TTT from a member of First Fandom. While they aren’t as nice as Darrow’s set, they are likely unique. The previous owner had, over a period of time, met up with each of Schwartz, Ackerman and Ruppert and had them sign each issue. Here’s the cover to the fourth issue of TTT, signed by them — in the Big News About Authors section, it ties back in to Merritt. 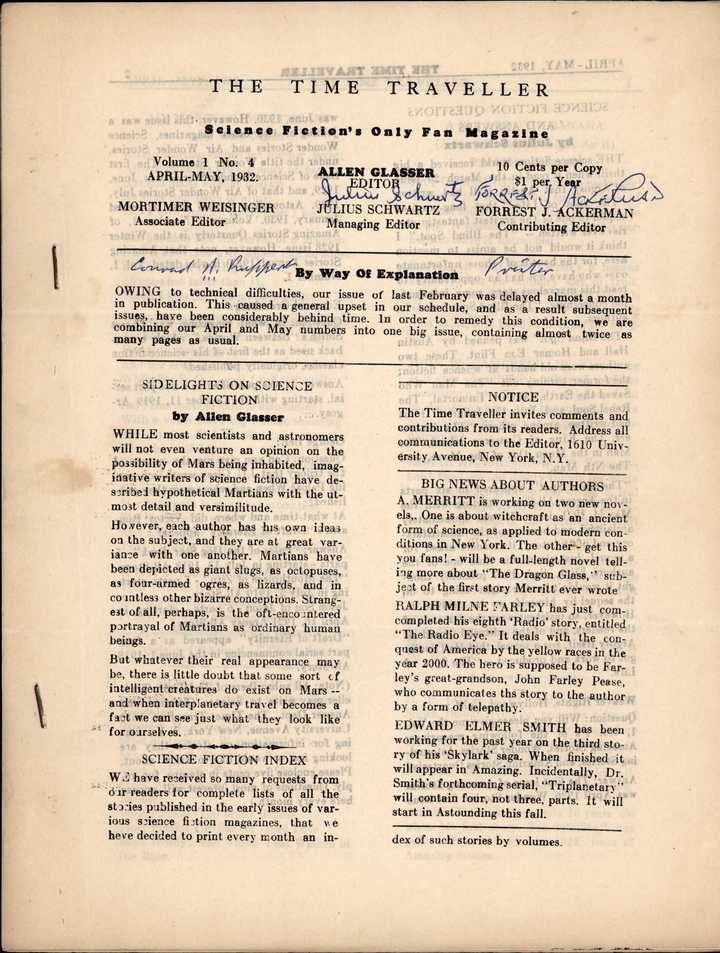 The second Schwartz letter is dated June 12, 1939, and is on his SF literary agency letterhead. It’s written about three weeks before what would be the first Worldcon was held in NYC. Here he thanks Darrow for his dollar contribution to the Science-Fiction Convention, and mentions that they estimate it’ll cost $250 to hold it. Times have changed! But in particular, he exhorts Darrow to make sure he makes it to the convention for its first day, July 2, 1939 (Darrow, travelling from Chicago, was thinking of arriving on July 3). 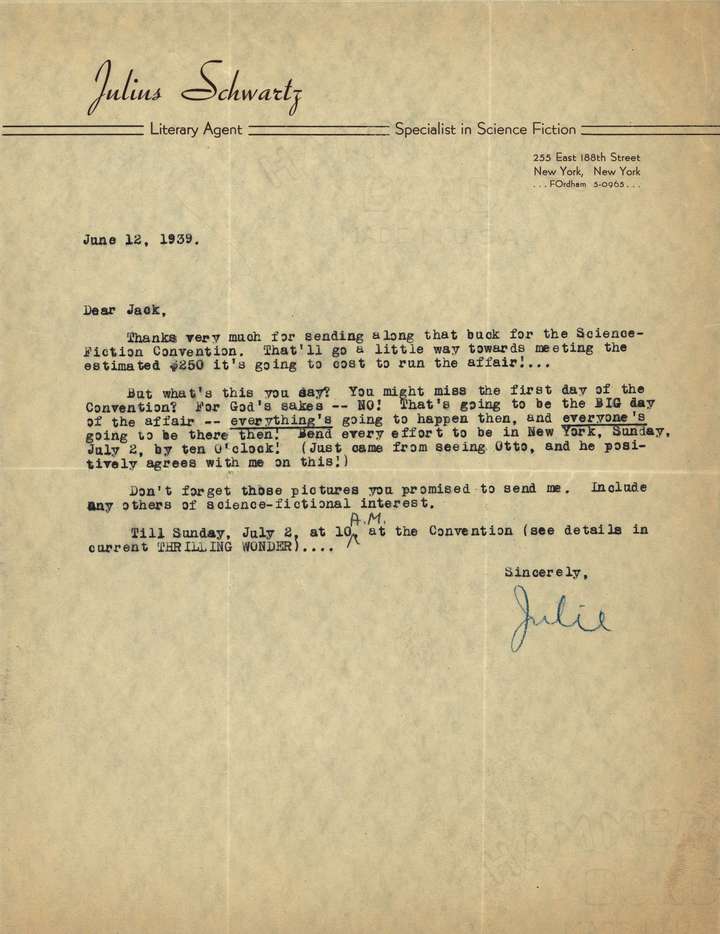 [As an aside, also included in the Darrow material I acquired were two copies of the program book for that Worldcon — one of which he’d had signed by several of the attendees — but what’s interesting is that while the bulk of each is the same, not all the pages are identical in each one, so there were apparently at least two different versions of the program book. But that will be for another post.]

In any event, Darrow did arrive in time to attend on July 2. With him was his friend, Bill Dellenback (later a photographer with the Kinsey Institute), and Darrow and Dellenback took several photos of the convention, as well as shooting some film footage. While the film footage has never turned up, among the Darrow estate material were several photos from the con. The one at the top of this article, taken by Dellenback, shows (left to right) Darrow, Jack Williamson signing something, Schwartz, an unknown person (can anyone ID him?), and Ruppert. I also found awhile back on the internet another photo, which must have been taken within moments of this one (photographer not IDed, but perhaps Dellenback as well), showing the same group (with Darrow and Schwartz now next to each other), so I’ll run that below as well. 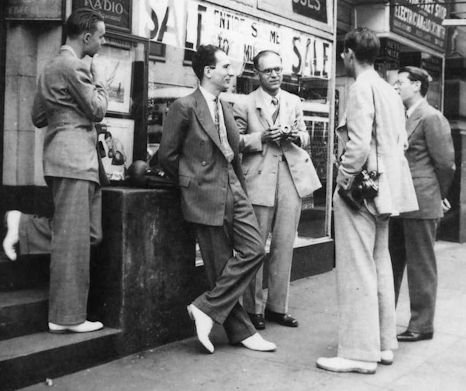 See the previous posts in this series:

Great stuff! Ackerman and Bradbury visited Merritt during that con, where he received them graciously. I would say that sequel to “Through the Dragon Glass” was the novel-in-progress Merritt referred to in a letter to Ben P. Indick.

Which one of the fanzines did the Merritt interview appear in? I’m curious, because KING KULL (Lancer) has a blurb from Merritt about REH which states simply, “Told beautifully.” I haven’t been able to track down anywhere that Merritt mentioned Howard.

An account of the Merritt/Barney/Amazing affair can be found here: