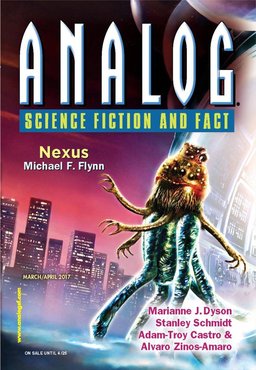 I’m getting used to Analog and Asimov’s new bimonthly publication schedule. For one thing, the magazines have added an additional 16 pages, which is a substantial bonus.

Here’s Analog editor Trevor Qachari on the impact of the change, and what we can look forward to in the March/April issue.

Effective immediately, with the very magazine you hold in your hands, Analog will be publishing only double issues — six of them per year. Right off the bat, you’ll see more novellas, longer book review columns, and more variety in the themes that thread through the stories. (For example, our next issue will have both the usual lighter April fare as well as a selection of time-travel pieces.)

The main advantage is that this format allows us to hold current subscription prices a bit longer. (You may have already noticed that this issue is 208 pages instead of our customary 192 for double issues; we worked hard to make sure that there wouldn’t be any loss of content.)

So, what kinds of things can you expect in this brave new world? Well, we have two novellas: “Nexus” by Michael F. Flynn, and John Alfred Taylor’s “Plaisir d’Amour”; “Sustainability Lab 101,” our fact article from Stanley Schmidt; and a trio of novelettes — “Europa’s Survivors” by Marianne J. Dyson; “Host” by Eneaz Brodski; and “The Human Way” by Tony Ballantyne — as well as almost a full “single” issue’s worth of short stories, some light-hearted, like “Ecuador vs. the Bug-Eyed Monsters” by Jay Werkheiser, and “Concerning the Devastation Wrought by the Nefarious Gray Comma and Its Ilk,” by Tim McDaniel; and some that involve a relative rarity in these pages: time travel. “Eli’s Coming,” by Catherine Wells; “Grandmaster” by Jay O’Connell; “Alexander’s Theory of Special Relativity” by Shane Halbach; “Time Heals” by James C. Glass; and “The Snatchers” by Edward P. McDermott — all struck a chord with me (for different reasons), and I bet at least some of them will for you, too.

The cover art this issue is by Tomislav Tikulin. Here’s the complete Table of Contents.

Analog Science Fiction and Fact is edited by Trevor Qachari and published by Dell Magazines. The cover price is $7.99 for 208 pages; a one-year subscription is $34.97 (US) or $49.97 (International). It is also available in a variety of digital formats. Check out the complete TOC, story excerpts, and additional free content at the website.

The March/April issue is on sale until April 25.

We last covered Analog with the January/February 2017 issue. See all our Analog coverage here.

Our Late March Magazine Rack is here. See all of our recent fantasy magazine coverage here.

I’ve been reading this one. I like it, although I’m not too keen on the time-travel theme, or thread, or whatever you want to call it. I’m not sure why… it just seems like diminishing returns to me.

That said, it probably wouldn’t bother me at all if I bought an anthology with a theme of time travel!

So far I have liked “Nexus”, “Eli’s Coming” the “Tie-Dye” story, and “Ecuador Vs. the Bug Eyed Monsters” the best.

Thanks for the mini-review Adrian!

Are you a regular Analog reader?

John, I’m not really a regular ANALOG reader. I buy about two or three copies a year, along with two or three copies of ASIMOV’S and MoF&SF, — mostly to buy something from the last bookstore standing (Barnes and Noble… it had to be Barnes and Noble…) and to get out of the S&S for a bit and keep up on the current stylings of the big three magazines.

Sometimes I finish them, sometimes I don’t! This one, it looks like I’ll finish.

Glad to see you supporting the mag… and B&N, now that I mention it! I try to get out to B&N twice a month, and the reason I go is to buy Asimov’s SF, Analog, F&SF, and the occasional Cemetery Dance. Of course, I always peruse the SF paperbacks while I’m there…