The tireless John DeNardo is back with another list, this time looking at the Can’t-Miss SF and Fantasy titles in March (and he should know). Here’s a few of his recommendations.

In the not-too-distant future, New York City’s streets are submerged underwater due to climate change, making every street a canal, every building an island unto itself. Intrigue abounds in the Met Life tower, now converted into a co-op, and the target of a buyout from a shadowy corporation desperate enough to sabotage the building’s infrastructure… Robinson weaves a tapestry of interconnected personal narratives that is captivating for its portrayal of humankind.

A penniless orphan named Hob is stranded on a planet owned by the company with a monopoly on interstellar space travel. She’s taken in by Nick, a member of the Ghost Wolves, a mercenary biker gang roaming the landscape of Tanegawa’s World. Years later, Hob discovers that Nick’s brother has been killed and Nick’s daughter has been taken by taken by devious beings known as the Weathermen. It’s time for action.

The Man with the Speckled Eyes is the fourth volume of the Lafferty Library, a 12-volume project from Centipede Press that aims to reprint all of R.A. Lafferty’s short fiction. Here’s the description from the Centipede Press website.

In a career that began in 1959 and continued until his death in 2002, R.A. Lafferty garnered the admiration of authors and editors including Robert A.W. Lowndes, Harlan Ellison, A.A. Attanasio, Gene Wolfe, Michael Swanwick and many, many others. His body of short fiction is comprised of well over 200 stories and, despite his vast popularity, there was never a concerted effort made to produce a comprehensive collection of his short fiction, until now.

Welcome to the fourth volume of the Lafferty Library, a series that will run to a dozen volumes and collect all of R.A. Lafferty’s short fiction. This present volume features Lafferty classics such as “Bank and Shoal of Time,” “The Cliff Climbers,” “Been a Long, Long Time,” “Ishmael into the Barrens” and many more. The depth and breadth of R.A. Lafferty’s wondrous imagination is on display once again. Enjoy seeing the world as you’ve never seen it before!

This volume includes an introduction by Richard A. Lupoff, an afterword by John Pelan, and photographs of R.A. Lafferty. 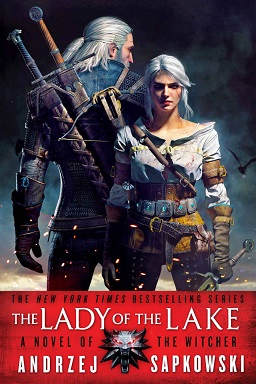 The Man with the Speckled Eyes was published by Centipede Press on March 14, 2017. It is 400 pages, priced at $75 in hardcover. There is no digital edition.

Additional titles on the list include The Lady of the Lake by Andrzej Sapkowski, Spaceman of Bohemia by Jaroslav Kalfar, and The Wanderers by Meg Howrey. Read the complete article at Kirkus Reviews.

See all our coverage of the best new book releases here.

Thanks for the plug, John!