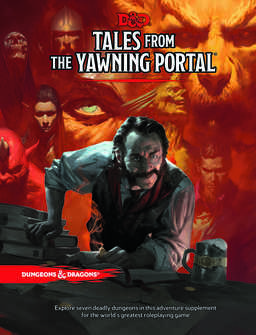 Now here’s a splendid idea, long overdue. Next month Wizards of the Coast is releasing an anthology of some of the finest D&D adventures ever created — including Gygax’s masterpiece Against the Giants, and the insidious and infamous Tomb of Horrors — under one cover, all updated for use with the Fifth Edition of the rules. There’s a lot of excitement building for this book, and rightly so… it’s a great way for modern players to experience some of the classic dungeon crawls that transformed early players into life-long gamers a generation ago.

Dread tales told in the dead of night!

When the shadows grow long in Waterdeep and the fireplace in the taproom of the Yawning Portal dims to a deep crimson glow, adventurers from across the Forgotten Realms, and even from other worlds, spin tales and spread rumors of dark dungeons and lost treasures. Some of the yarns overheard by Durnan, the barkeep of the Yawning Portal, are inspired by places and events in far-flung lands from across the D&D multiverse, and these tales have been collected into a single volume.

Within this tome are seven of the most compelling dungeons from the 40+ year history of Dungeons & Dragons. Some are classics that have hosted an untold number of adventurers, while others are some of the most popular adventures ever printed. The seeds of these stories now rest in your hands. D&D’s most storied dungeons are now part of your modern repertoire of adventures. Enjoy, and remember to keep a few spare character sheets handy.

For use with the fifth edition Player’s Handbook, Monster Manual, and Dungeon Master’s Guide, this book provides fans with adventures, magic items and deadly monsters, all of which have been updated to the fifth edition rules. Explore seven deadly dungeons in this adventure supplement for the world’s greatest roleplaying game.

Tales from the Yawning Portal will be released in hardcover on April 4. It includes the following seven adventures.

Anybody else remember Dead in Thay? Part of the Dreams of the Red Wizards campaign, it was published for D&D Next/5th edition in April 2014. 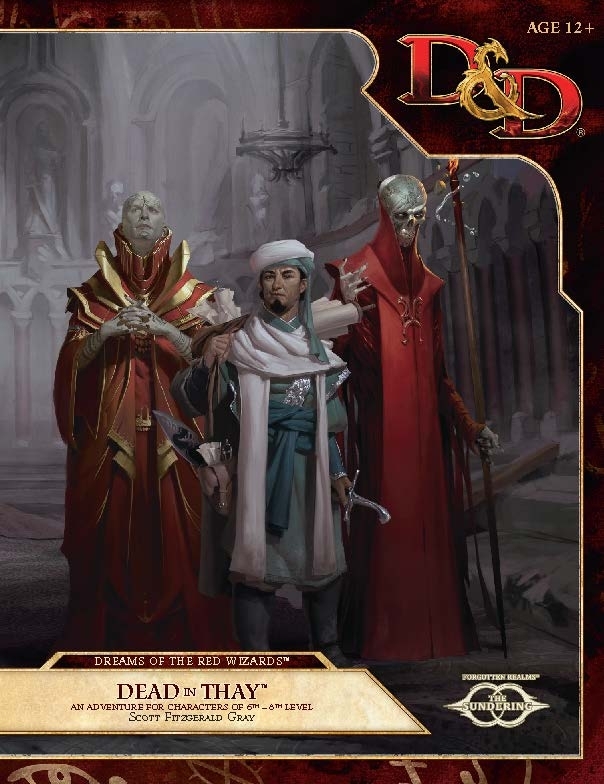 How about Bruce Cordell’s The Sunless Citadel, the Third Edition module released in 2000? (click to embiggen) 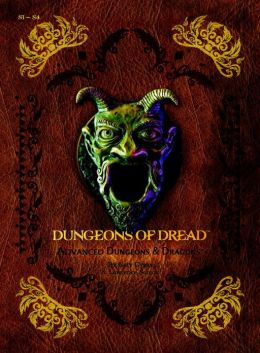 This is a really terrific idea, and I hope other collections follow.

A few years ago WotC experimented with straightforward reprints of first edition rules and adventures, including:

Not a lot of people remember both The Temple of Hommlet and Tomb of Horrors received makeovers for Fourth Edition:

Tales from the Yawning Portal will be published by Wizards of the Coast on April 4, 2017. It is 248 pages, priced at $49.95 in hardcover. See more detail (including an introduction to The Sunless Citadel, and a look at sample monsters from the book) here, and read the introduction here.

Read all of our latest RPG coverage here.

These modules should be prerequisites for your gaming group. When neubies ask what style of adventure it is the DM should merely have to allude to the “Tomb of Horrors”, “Ravenloft” or “White Plume Mountain” and see them quivering in their boots.

Fire your unlucky dice Grasshoppers and put your +2 Helmet on!

Forge of Fury – One of my all time favorites. Better with some tinkering, but a great dwarven adventure.

This is their most appealing book since the core 5th edition books.

I still have the sunless Citadel 3.0 book, but i don’t know a thing about the rest of these.

My experience with classic modules — mostly Judges Guild, of which I collected the best of the best in the late ’90s — hasn’t been very good. Every one disappointed, even those I’d unknowingly played in and loved. (Turns out our GM was really good at weaving old modules into the stories of our campaign.)

I know enough about Against the Giants, Tomb of Horrors, and White Plume Mountain to know they’re not my style.

They must’ve pre-released it, because I held a copy of it in my hands today at a game store in Red Wing, Minnesota.