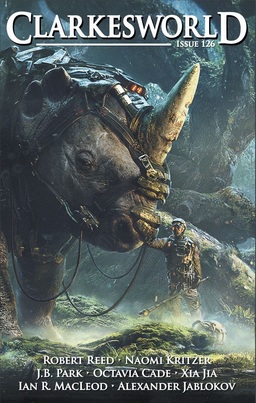 Clarkesworld Magazine for March [contains] five original stories including a great novelette in translation… these pieces are concerned with new forms of intelligence and with the end of the world. Or maybe just with the end of certain aspects of it. But at least two of the stories are more specifically apocalyptic, and many besides are about doubt and depression, anxiety and seclusion. These stories show people closing themselves off from the rest of the world — out of fear or hurt — and then having to decide whether to open up again. It’s a wonderful issue…

This is a wrenching and beautiful story about despair and about loneliness. About machines and machine intelligence and people in need of a voice and presence. The story breaks itself between two storylines, between parts that involve Alan Turing, which are semi-historical and reveal a man desperate for connections but deeply worried about make thing, and parts that involve a young woman who is using machines as part of therapy to help her through depression and anxiety. The parts with Turing reveal his situation as a gay man in a world where being gay was a crime, where every conversation he had might lead him to ruin. To embarrassment and worse. To what did ultimately happen to him… It’s an amazing story that is deep and lyrical even as it captures something of a biographical tone.

The cover, “Jungle Deep,” is by Sergei Sarichev.

And this month’s podcasts:

“Two Ways of Living” by Robert Reed
“Real Ghosts” by J.B. Park
“Waiting Out the End of the World in Patty’s Place Cafe” by Nomi Kritzer
“Crown of Thorns” by Octavia Cade
“Goodnight, Melancholy” by Xis Jia, translated by Ken Liu
“The Discovered Country” by Ian R. MacLeod
“At the Cross-Time Jaunter’s Ball” by Alexander Jablokov

Clarkesworld is edited by Neil Clarke and Sean Wallace, and published by Wyrm Publishing. The contents are available for free online; individual issues can be purchased for $3.99, and monthly subscriptions are $2.99/month. A 6-month sub is $17.94, and the annual price is $35.88. Learn more and order individual issues at the magazine’s website.

We last covered Clarkesworld with Issue 125.

Our March Magazine Rack is here. See all of our recent fantasy magazine coverage here.