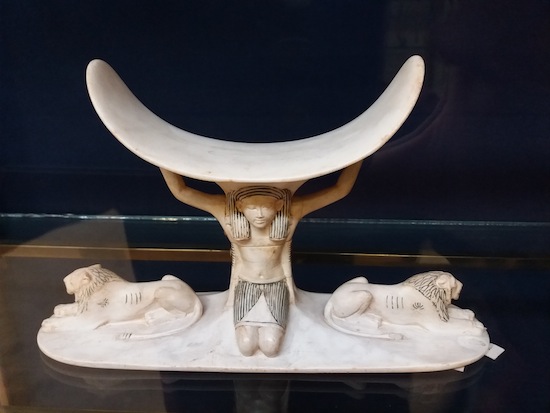 Ivory headrest. This is used as a pillow in many African
cultures if you want to preserve your hairdo. How you’re
supposed to actually get any sleep is beyond me

King Tutankhamun (1336-1327 BC) was a short-lived 18th dynasty pharaoh who was obscure and little studied by egyptologists until Howard Carter discovered his nearly intact tomb in 1922. Since then his most elaborate burial goods have been photographed countless times, and the whole world is familiar with images of his famous death mask, sarcophagi, and other golden treasures.

But these are only a small fraction of all the finds in the tomb. A total of 5,398 artifacts were retrieved, and on a recent visit to the Egyptian Museum during a writing retreat in Cairo, I had the privilege to see some of the ones not often reproduced in books. 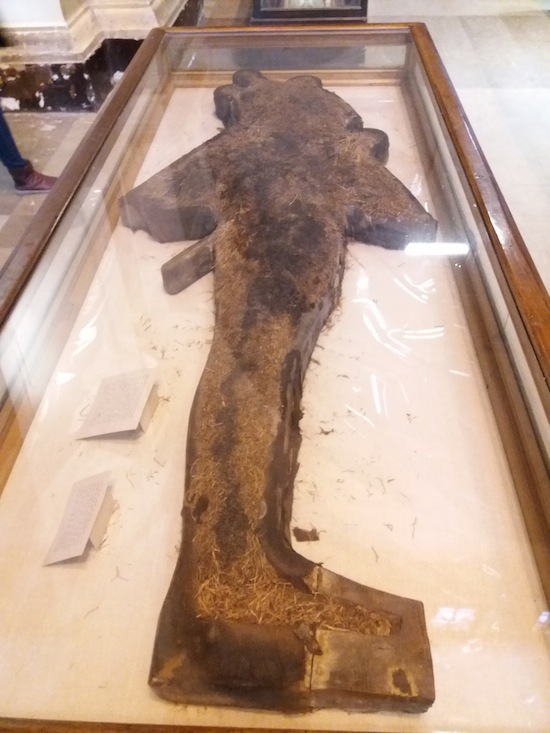 This odd artifact is called a “Bed for Osiris.” It’s a wooden trough
in the shape of the god, filled with earth and planted with grain.
]Once the grain had grown to about ten inches it would be
wrapped in linen as a symbol of resurrection.

An entire wing of the upper floor is dedicated to finds from Tut’s tomb. The most fabulous treasures are in a separate room where you are not allowed to take photographs. Visitors who ignore the large, obvious signs telling them not to take photos are yelled at by a burly guard. I saw this guy actually snatch the phone out of a woman’s hand when she wouldn’t listen to him! Luckily you’re allowed to take photos of the humbler artifacts.

I have to apologize for the quality of some of these images. While the museum’s collection is simply stunning (you’ll be seeing plenty more of this stuff in coming weeks), it suffers from bad lighting and display cases that often need a good cleaning. Thus some of these shots are taken at odd angles to reduce reflections. Luckily, nothing can diminish the power of these masterpieces of ancient African art. 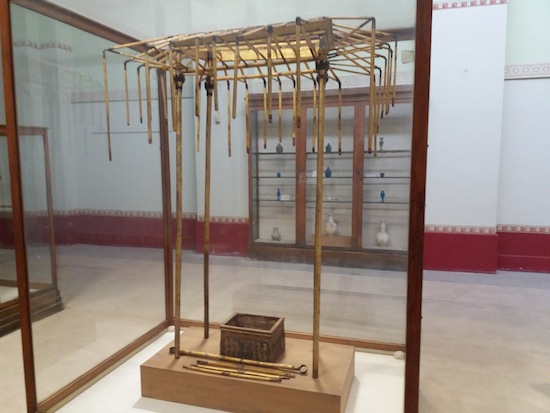 An early parasol. The gold rods could be set horizontally and
a cloth covering, now lost, would shade Tut from the sun 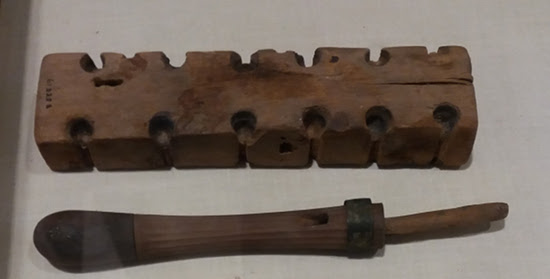 A fire drill, in case the pharaoh needed
to make some fire in the afterlife 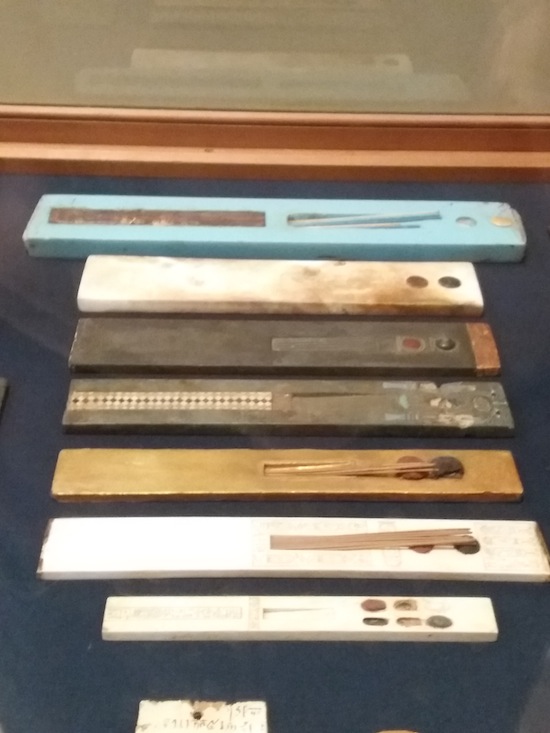 A series of writing tablets, with reed pens and reservoirs for ink 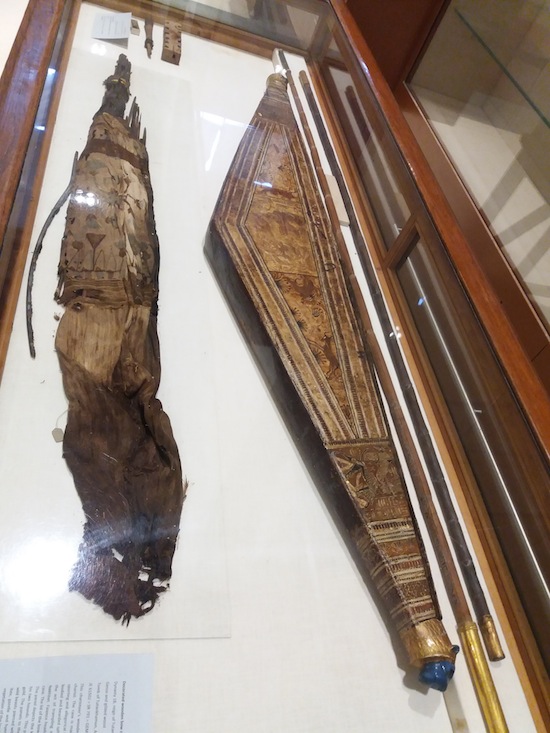 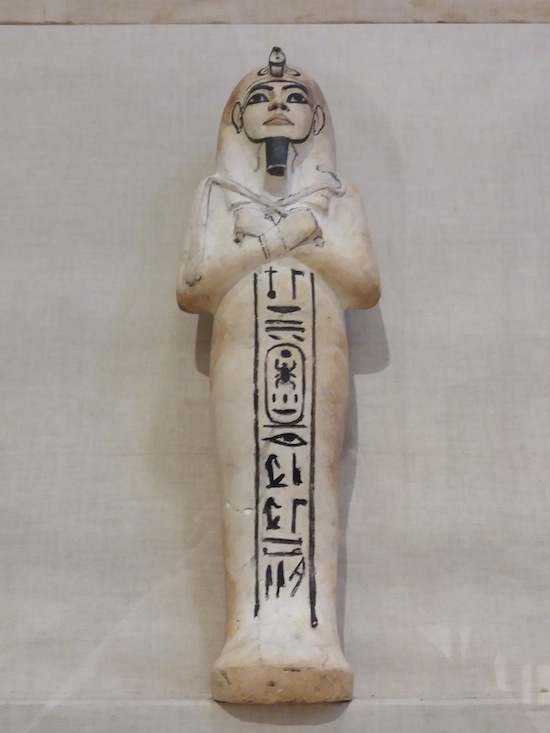 This is a shabti. These figurines acted as servants in the afterlife.
They came in a huge variety but generally took the shape of
a mummiform individual with an inscription on the front.
You can see some bargain basement shabti for poor
people in a post I did on the Petrie Museum 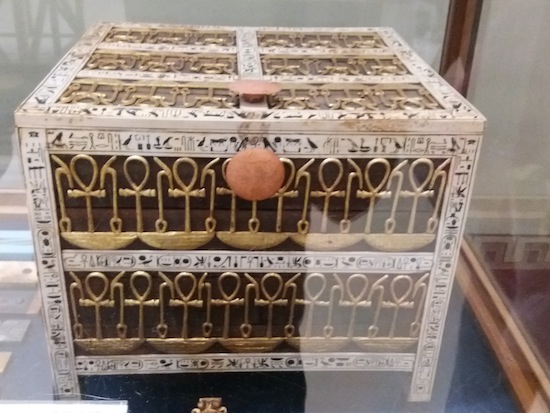 One of many elaborate boxes for holding the artifacts 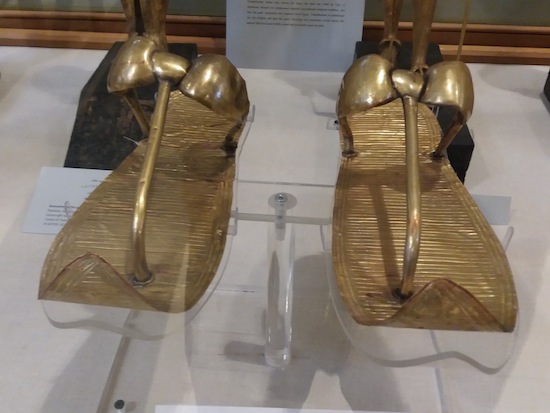 Less comfortable, but far more bling that a pair of Reeboks.
These were found on the feet of Tutankhamun’s mummy
and imitate the shape and texture of palm leaf,
grass, and papyrus sewn sandals 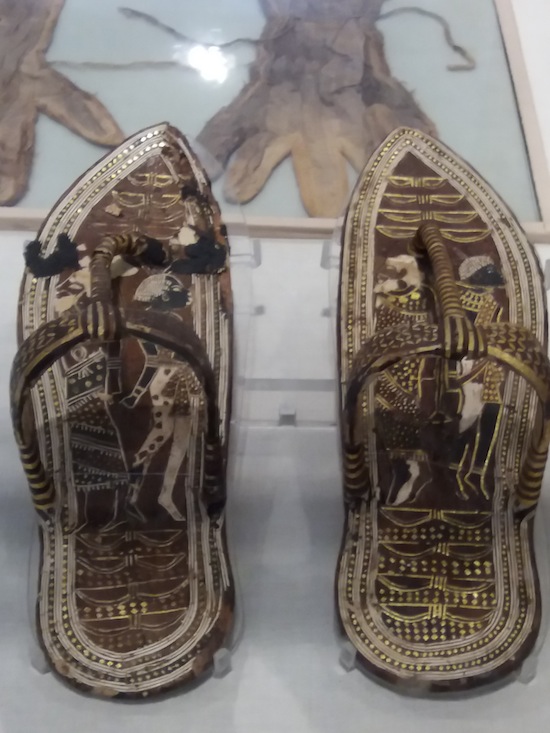 These sandals are made of wood, leather, bark, and gold.
They depict bound captives along with the Nine Bows,
symbolizing the nine traditional enemies of Egypt.
Thus when the pharaoh walked he would be
literally trampling his enemies

Sean McLachlan is the author of the historical fantasy novel A Fine Likeness, set in Civil War Missouri, and several other titles. His novel set in Tangier, The Last Hotel Room, is on sale for 99 cents through the Amazon US Kindle store through April 3. Find out more about him on his blog and Amazon author’s page.

Regarding the ivory headrest, Japan’s geishas apparently use something very similar, and due to the same need to preserve their hairdo. I asked one the exact same thing you were wondering about, and she replied that “you get used to it after a couple of months”.

With that many writing tablets, it looks like Tut planned to spend the afterlife as a writing retreat, too.