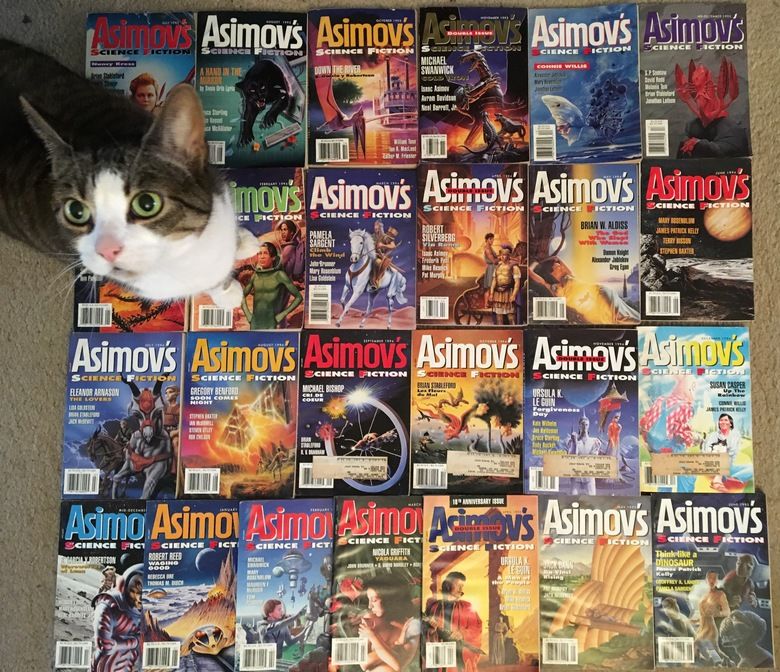 Okay, my cat doesn’t really read science fiction. But she does wander over to see what’s going on when I’m photographing eBay purchases. She even knocked over part of my collection as I was prepping a piece on Robert E. Howard a while back (yeah, that’s her white paw on the far right). Cats. They don’t care.

But if Jazz did read science fiction, I’d tell her the early 90s was probably my favorite era of Asimov’s Science Fiction magazine. Not because the fiction was necessarily better — although there was some really great stuff! — but because it was before I started producing publications of my own, and thus it was the last time I had enough free time to read the magazine even semi-regularly. I have a (complete?) run of the magazine from 1977, but most of my copies are in storage. So when I saw the set above (minus the cat) for sale on eBay, I put in a low bid, and won the entire lot for around ten bucks. Most of them are in terrific shape, and only a few have mailing labels, so overall I’m thrilled with the purchase. (Although the February 1994 issue now has a pair of cat prints on the cover.)

It’s a virtually complete run from July 1993 to June 1995. 25 issues, 4,976 pages of top-notch science fiction. I don’t think there’s any real debate that Asimov’s, under then-editor Gardner Dozois, was the finest genre magazine on the stands in the early 90s. Analog, under editor Stan Schmidt, was chiefly packaging hard science as short stories, Scott Edelman’s Science Fiction Age, founded in 1992, was just getting underway, and the venerable Amazing Stories sputtered and died in early 1995. Only F&SF (edited by Kristine Kathryn Rusch) and Pulphouse (also Rusch, believe it or not) gave the magazine any real competition. 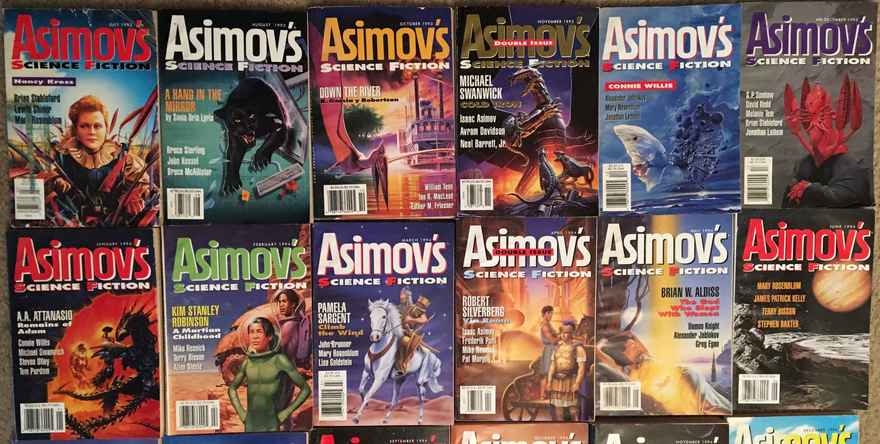 How thoroughly did Asimov’s dominate the genre in the 90s? Here’s a list of the 1996 Hugo nominees for short fiction.

That’s right — of the 16 short fiction nominees, all but four were from Asimov’s. Ladies and gentlemen, that’s a near-monopoly.

There’s even a couple of new stories by Isaac Asimov himself, who died in 1992.

Under Art Director Terri Czeczko, the magazine also had terrific interior art (something I very much miss in the current incarnation, although I understand the economic necessities of it) from Todd Lockwood, Alan M. Clark, Jonathan and Lisa Hunt, Dell Harris, Steve Cavallo, Laurie Harden, Peter Bartczak, Mike Aspergren, Pat Morissey, Steve Rader, and many others. 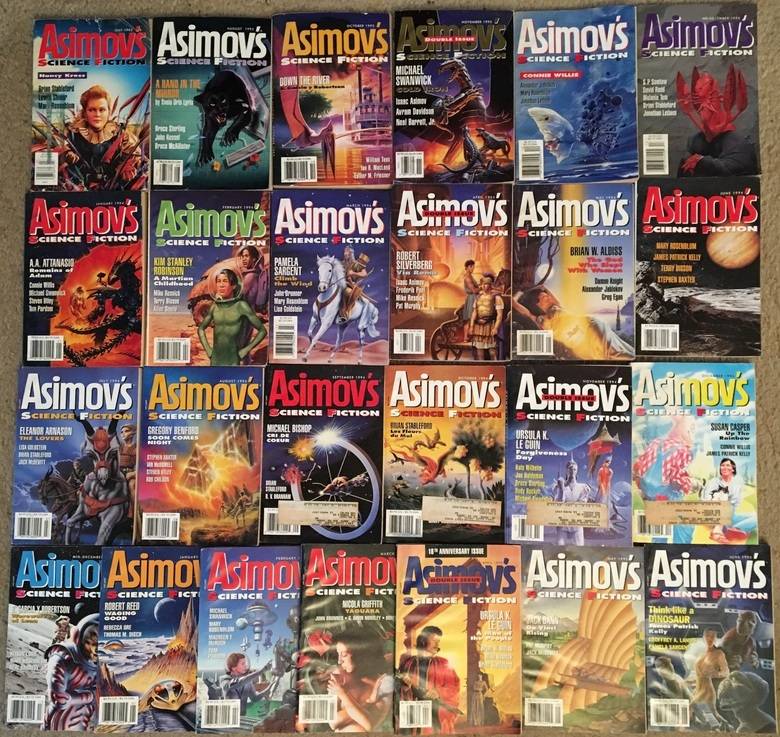 Here’s a picture without my cat (click for bigger version)

As a special bonus, the last issue in the set, June 1995, contains one of my all-time favorite science fiction stories, James Patrick Kelly’s Hugo Award-winning “Think Like Dinosaur,” which imagines what it might actually like to be a transporter operator… with a twist.

I think my point in all this is that, if you’re looking for a really terrific reading experience, something you can really sink your teeth into, here’s a suggestion: why not consider 4,976 pages of top-notch science fiction from the best writers in the industry — for under ten bucks? That’s the best reading value you’re going to find online, trust me.

We live in an era where you can find and purchase multiple sets like the one I found online, every day of the week. Some of them are overpriced. Most are not. You can browse, select and happily purchase one in less time than it takes to listen to “Stairway to Heaven.”

There are folks out there passing their collections on for a song. Give them a good home. Believe me, you’ll be happy you did.

I have the identical picture, with the cat on the left of the image, except it’s the complete John Carpenter Blu-ray library and the cat has her paws on Christine.

All pictures are improved by the presence of a cat. It’s just scientifically proven.

Ever tried playing a boardgame, like Monopoly, with a curious cat around? It’s impossible. They sit their fat furry butts right in the middle–displacing hotels, markers, money, etc.!

Another incredible score! Most of those ASIMOVs look brand new! Congratulations!

It’s hard not to hate John for finding such a terrific bargain!

I have somewhere between 50% and 60% of all the print issues ever produced, but because of an acute space problem, I don’t know whether it’s wise to buy any back issues as well. Besides, there are huge swathes of my collection that are still unread … I used to be quite a hard working young guy.

To illustrate the dominance of Asimov’s over a sustained period, here are some stats:

In the same period of 25 years, there were 396 short fiction items on the final ballot. Of these, 206 appeared in Asimov’s (ten of which appeared in chapbooks, possibly slightly earlier than their magazine appearance). That’s 52% of the finalists.

This is an era of dominance to rival, and arguably surpass, that of Campbell’s Astounding in the 1940s.

But is it the end of an era? Asimov’s has been completely shut out of the Hugo final ballot for three years running, and I’d be surprised if this year is any different. It’s not just the Puppy debacle—there are other factors as well.

We are unlikely to see one publication lead the field by such margins, ever again.

@dolphintornsea: “because of an acute space problem.”

I’ve mentioned to John before, right here in the comments section at Black Gate, that I have a complete set of Asimov’s, as well as F&SF (all the way back to 1949), Galaxy, and Analog, back to when they changed their name to Analog. I only have scattered issues Astounding, pre-Analog Analog, because I’m already running out of space. Plus I continue to subscribe to Asimov’s, F&SF, and Analog. A large portion of my basement contains sealed plastic boxes full of fantasy and science fiction magazines. Moving is a chore. 😉