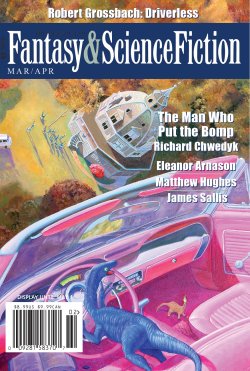 Full disclosure before we start this review: one of the contributing authors is a friend of mine, so take that part of the review with a grain of salt.

The issue starts with “Driverless” by Robert Grossbach, one of those “what if machines came to life” stories told in a near-future where driverless cars dominate the roadways. A few decades back, this would have been nothing but fanciful storytelling, but with recent advances in both artificial intelligence and driverless technology, it might actually be a problem that we have to deal with in the years to come.

“The Toymaker’s Daughter” by Arundhati Hazra takes a common story idea of toys magically coming to life and follows it through the real world consequences.

“Ten Half-Pennies” by Matthew Hughes is the first story in what promises to be an ongoing series about a wizard’s apprentice (the next story is actually advertised as set to appear in the May/June issue). Here we see a bullied child grow into a collection agent and then wizard’s apprentice, all the while maintaining his own moral code. Both the characters and the magic system are well-defined in this piece about honor and debt.

“The Man Who Put the Bomp” by Richard Chwedyk is the next novella in his award-winning Saur series. The basic premise is that miniature talking dinosaurs are designed by a genetic research firm and sold as pets. When problems arise with the saurs, production is discontinued and surviving saurs are relocated to shelters. The series concerns one such shelter and the wonderful assortment of odd characters (both saur and human) who live there. I’ve been listening to Richard Chwedyk read these stories for years and it’s impossible for me not to hear his voice in my head when I’m reading them. Not only do we learn about the man who put the “bomp” in these saurs, but we find out why they should never be placed behind the wheel of an automobile (the cover art by Bryn Barnard should give a hint as to how badly it can go). I’m seriously waiting for a collection of all these stories to appear somewhere and will keep you posted when it happens.

“A Green Silk Dress and a Wedding-Death” by Cat Hellison is a story about mer-people, human sacrifice, and why simply being alive isn’t enough for most people.

“Miss Cruz” by James Sallis plays with the trope of a common man being given god-like power and how that power can sometimes become nothing more or less than an addiction.

“The Avenger” is Albert E. Cowdrey’s 75th published story in Fantasy & Science Fiction (holy crap). It concerns a supernatural detective hired to protect a wealthy widow from the men who murdered her husband. Weasels are involved.

It wraps up with “Daisy” by Eleanor Arnason. And now might be a good time to say that I’ve seen so many weird things in my life and keep up on modern science so little that I honestly didn’t consider this story to be science fiction OR fantasy. Seriously, it wouldn’t astonish me to find out that this whole thing more or less happened in real life. A private investigator is hired by a mob boss to find Daisy. Who Daisy is and why he wants her are secrets best discovered for yourself.

If you want to pick up a copy, try a local bookstore or newsstand. If you just don’t have any in your area (they are a bit of a dying breed), then head to sfsite.com/fsf to learn how to order an issue (they’re available in print and electronic versions) or just get a subscription.

We last covered F&SF with the January/February 2017 issue.

Excellent! I saw that cover and hoped! One of the first stories I read in F&SF was a Saur story (“Tibor chooses not!” entered our family lexicon), but I could never remember the author’s name or enough about the story to search for it.

/me makes a note of “Richard Chwedyk”

Now if I could figure out what that story was that took place in a massive, adventure-filled Hell. I thought it was in that same issue as Tibor, but apparently not.

The Magazine of Fantasy and Science Fiction #730, March-April 2017 | SF MAGAZINES