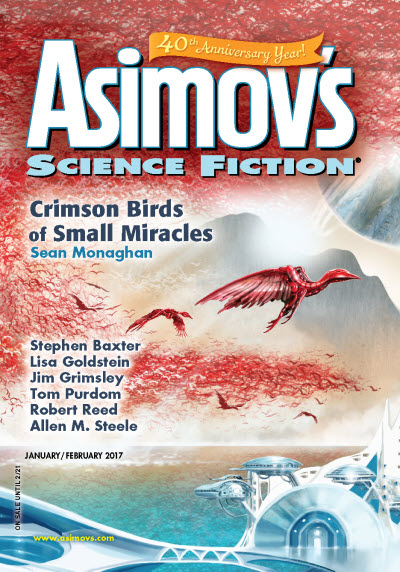 This year marks the 40-year anniversary of Asimov’s and this issue not only includes a brief recap of the magazine’s history in an editorial, but also comments from each of the contributing authors about when they first read the magazine and what it means to them.

Check out the cover art by Maurizio Manzieri. That’s a scene from the first story in the magazine, “Crimson Birds of Small Miracles” by Sean Monaghan. On the surface, the story is about a father taking his two daughters to see the beautiful mechanical birds of the title, but there is also a much deeper and more touching story at work here, illustrating the truth that some tragedies will continue to follow us into the future, no matter how many advances we make with technology.

Next is “Tagging Bruno” by Allen M. Steele, a tale set in the future and on another world, yet concerned with current debates on wildlife preservation. Sure, it gets a little preachy, but the characters are all well-defined and the ending has just a tinge of fun irony to it.

“Still Life with Abyss” by Jim Grimsley starts with that old science fiction trope of the parallel universe and reverses the standard story. It’s set in a research station that monitors activities in all of the parallel universes. Of course, there are the usual “What if?” universes (America lost the Revolution, the South won the Civil War, the Nazis won World War II), but also all of the small changes in individual people’s lives. The idea is that we all have alternate paths that our lives might have taken and on some parallel world, we did. But the research team has discovered one man, one solitary man in all the recorded multiverse, whose life NEVER deviates from a single course, no matter what happens around him.

“Fatherbond” by Tim Purdom follows a group of human colonists who arrive on a new world, only to discover that another race of aliens has already arrived and is forbidding anyone to colonize it. The argument against colonizing is an interesting one. While there is no intelligent life native to the planet, intelligent life might naturally evolve there over hundreds of millions of years. So colonization is wrong not because it would displace current inhabitants, but rather because it would interfere with the natural evolution of future inhabitants. Obviously, some of the humans feel differently and the aliens’ motives aren’t as pure as initially stated.

“Winter Timeshare” by Ray Nayler is another story set in the future and talking on the surface about synthetic beings, but underneath communicating ideas about prejudice that are all too relevant to the here and now. Imagine the immigration laws we’d need if the dead were returning to life in robot bodies? How do you bar entry from the afterlife?

“The Catastrophe of Cities” by Lisa Goldstein combines a weird grade school friendship (that type that always mutates into something kind of ugly in high school and beyond) with a series of oddly-shaped houses. Of course, the two girls go exploring and see some truly bizarre stuff. A nice story that keeps you guessing.

“Pieces of Ourselves” by Robert R. Chase could easily have been switched over to a current-day setting, with a woman being threatened by terrorists and finding help in the absolute last place she would think to look.

“Destination” by Jack Skillingstead is another “ideal city of the future surrounded by dystopian hellscape” stories. Our main character has to go on a trip outside of the city as part of his job, ends up in a hellscape (which honestly just comes off like an average town), and decides that the world has to change. A bit preachy, but the characters he meets are interesting.

“The Meiosis of Cells and Exile” by Octavia Cade focuses on the exile of a scientist to Siberia during Stalin’s reign in Russia. It’s much more of a fictional story about the history of science than what we’d generally consider traditional “science fiction.” The main character begins speaking with past versions of herself, which are not hallucinations, but actual physical manifestations (so there’s a little science fiction in there), each providing insight into her present situation and giving her the strength to persevere.

“Starphone” by Stephen Baxter is a story set in a post-global warming era that provides some clues to the sort of society that might actually be waiting for our descendents. Short version: some things are better, some things are worse, and the human spirit continues to provide hope for change. It also details the Fermi Paradox, which I’m sure plenty of Black Gate readers already know, but which was a new concept to me.

“Blow, Winds, and Crack Your Cheeks” by John Alfred Taylor is a much more low-tech story set in the near-future with regard to climate change.

It all wraps up with “The Speed of Belief,” a novelette by Robert Reed. Personally, I usually prefer more grounded stories that focus on characters with only a handful of scientific innovations to build the plot. But sometimes you need a “go big or go home” gonzo-mad sci-fi piece with sentient rivers, robot goddesses, billion-year-old sanctuary starships, and old-fashioned human sacrifice. And you gotta end the issue with that kind of story because absolutely nobody wants to follow that act.

See more details on the issue here. We last covered Asimov’s SF with the December 2016 issue.

Is Robert Reed’s “The Speed of Belief” one of his Greatship stories? It sure sounds like it! He’s written a bunch of them, and even published an imposing collection a few years back:

John, I hadn’t realized it was part of a series. That would explain why the fantastic premise of an ancient artifact starship barely got any mention … because Reed assumed everyone reading already knew about it. Let that be a lesson to all series writers: remember that every story in your series is the first story someone is reading in your series.