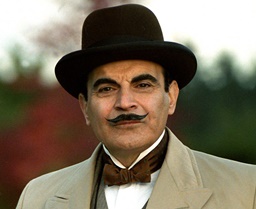 I mentioned last week (which you know, enlightened reader, because you love this column. You probably bookmarked the link as a memoriam to me. Anyhoo…) that I discovered the Nero Wolfe books through the A&E television series starring Maury Chaykin and Timothy Hutton. I’d just never read any of the books, even though the series had been around for decades. And now it’s my favorite mystery series of them all (sorry Holmes and Pons).

Well, some thirty-ish years ago (maybe a little more), I read a couple of Agatha Christie books. I remember that one was definitely a Poirot. I didn’t care for them and that was that. So, while Christie (alongside The Bard) is reckoned to be the best-selling fiction author of all time, she was absent from my not inconsiderable mystery library.

Then, a few years ago, I began watching the Hercule Poirot television series starring David Suchet (here’s a trailer). And I really, really liked it. From 1989 through 2013, Suchet filmed 70 Poirot stories! So, I decided to give Christie’s writings a chance again. Well, Poirot, anyways: I’m not sure you could pay me to read Miss Marple. Thus, I bought Hercule Poirot: The Complete Short Stories and had at it. As I write this, I’m on story 19 of 51.

First thing I noticed is how short these things are. Yes, I know they’re called ‘short stories,’ but while I haven’t tried counting words, most of them are between 8 and 16 pages long. And that’s on big ol’ 6” x 9” paper. Also, she was really cranking these out. A new Poirot was appearing almost weekly in The Sketch magazine.

The short stories were adapted into one-hour episodes, while the Poirot novels went two hours. Much filler has been added to the original stories for the television show.

Perhaps due to the high volume, I haven’t been all that impressed with her plotting. She seems a bit haphazard with it. I don’t think she even bothered to explain why a child was kidnapped in “The Adventure of Johnnie Waverly.” Plotting does not seem to be her forte. Nor does it strike me that it was particularly important to her.

As I read the stories, I am populating them with Suchet, Hugh Fraser as Poirot’s Watson, Colonel Hastings, and Philip Jackson as Chief Inspector Japp. And by doing this, I am quite enjoying the stories. Much more than I would have without those images. In fact, I don’t know that I would continue on with the collection if not for my picturing of Suchet.

As with Nero Wolfe, my frame of reference is coming from the characters via the television show, not the original stories. Unlike, say, Sherlock Holmes, where I’m deeply versed in the stories, in spite of the MANY adaptations I’ve viewed. 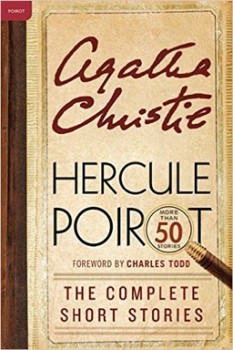 Also, Christie’s Poirot is occasionally nimble or agile – something that certainly does not apply to Suchet. Watching Suchet ‘run’ during The Veiled Lady is rather amusing. That story, by the way, is a nice twist on Doyle’s “Charles Augustus Milverton.”

Christie’s Hastings seems a little less subservient than in Fraser’s portrayal. Hastings is the first person narrator of the first seventeen short stories. It’s a bit jarring when he is absent from number eighteen, “The Incredible Theft,” which is told in the third person and is lengthy at 42 pages.

I’ve felt that Japp and Poirot are almost chummy in the television series, but I get more of a sense of the Holmes-Lestrade relationship from the stories. Christies’s Japp is a noticeably bit less congenial and partner-ish than Philip Jackson’s Japp. There’s a bit more of the policeman’s disdain for the private investigator. Though Poirot was an accomplished police officer in Belgium before the war.

More than once, Poirot, who stresses order and method (far more than in the Suchet series) and the using of the little grey cells (the brain) pokes fun at things like studying tobacco ash and analyzing mud and footprints. Clearly, a Christie elbow into the ribs of Sir Arthur Conan Doyle.

The television series looks great, has high production values and fine casting. As I said with the Wolfe series last week, I don’t know that we can expect to see a superior version down the line. Suchet, especially, nailed the part and will cast a Basil Rathbone-like shadow for quite a while.

Kenneth Branagh, who is the reason I am a Shakespeare fan, is starring as Poirot in a new version of Murder on the Orient Express. Too soon after Suchet? We’ll see.

First, I HIGHLY recommend watching at least a few episodes of this series (here is a trailer). I enjoy both the shorter and the full length ones, so it depends upon how much time you want to spare. Then, read some of Christie’s stories and picture the actors in the parts. See what you think of that.

Christie’s early Poirot stories are nothing like the later Poirot Canon. Her later short stories and the novels are some of the most convoluted and highly respected plotting of the Golden Age.

Poirot is so lightly sketched in the stories (he’s really just a collection of mannerisms) that I think the character benefits in the transition from paper to screen. Maybe the following is a skit on his deductive powers?

In terms of productivity, I glanced at the wiki entry and was impressed to see that Conan Doyle really did churn out the first two collections at a rate of one story a month.* I also looked up Chesterton, as I’ve always been curious how the Father Brown stories saw the light (via a magazine, story-by-story, or as complete anthologies). As you probably know, the first twelve were serialised in the ‘Saturday Evening Post’, but Chesterton seems to have been content with publishing subsequent stories in book form.

Sorry to hear your series is coming to an end and wish you every success in your new endeavours!

* presumably a similar work-rate to Ashton, Howard etc while writing for ‘Weird Tales’.

I enjoyed the earlier episodes, but I think the two-hour stories tended to struggle. Also, Suchet’s Poirot isn’t awfully nice – Christie’s Poirot is charming and comical. Suchet’s also a bit bulky to play such a small man (I believe he even wore a fat suit). Peter Ustinov was also far two big (tall rather than fat) but he’s a lot more amusing and likeable than Suchet’s characterisation

There’s one short story, incidentally, that kicks off with Poirot, Hastings and Japp having a weekend away together in the country.

Fitz – I went the other way. I thought that Christie’s Poirot was a bit more rude to Hastings (reminded me of Holmes and Watson) and more egotistical than Suchet.

It’s hard to believe that Suchet has been playing Poirot since the late 80’s. He really is the character for me, despite Ustinov turn as the detective. Almost by attrition.

I’ve always wondered what people thought of Alfred Molina’s Poirot in 2001’s Murder on the Orient Express. I always find it interesting when the set these old stories in a modern setting. One of the reasons I like Sherlock; shows their timelessness.

Darangrissom – I’ve not seen Molina’s version, but it seems he’d be the right look for the part.

I think Kenneth Brannagh is a really good actor, but I’m not sure what I expect of his Poriot later this year.