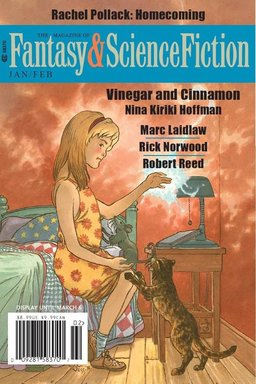 So I got a late start on this year’s reading, which means that I’ve just finished the January/February issue of The Magazine of Fantasy & Science Fiction. As with any collection of stories from a variety of writers, I liked some more than others.

Before we even start, check out the cover art by Charles Vess. A little girl is using her blue magic hand to befriend a rat and a cat. You hardly even notice that she’s not so much sitting on a bed as she’s squatting up against it. (Click the image to embiggen.)

And the cover image isn’t just a random design. It’s a scene from the first story of the issue, “Vinegar and Cinnamon” by Nina Kiriki Hoffman. Nothing too deep here. Just a young witch in training who accidentally turns her brother into a rat, then has to track him down and figure out how to change him back. The writer doesn’t take the predictable route of focusing on the young witch, instead keeping the point of view on her brother and how being a rat alters his perceptions and priorities.

“The Regression Test” by Wole Talabi presents a variation on the Turing Test, as a computer program is designed to simulate the thought processes of a scientific genius. While the scientists can verify how well the program recalls information, they have no way of judging how close the personality is to the original, so they invite the scientist’s daughter to ask the program questions. Of course, there’s more going on here than a simple question-and-answer session.

“A Gathering on Gravity’s Shore” by Gregor Hartmann continues the Franden series. Since I’ve never read any other stories with this character, it was a little rough to get the character and setting straight at first. It’s basically a garden party in which Franden flirts with a botanist and tries to draw out opinions on a pending civil war.

Next is the novelette, “Homecoming” by Rachel Pollack. Again, this was part of a series of stories featuring Jack Shade, a paranormal investigator cursed to take on the case of anyone holding one of his business cards. This time, the case involves retrieving a missing piece of a woman’s soul. Of course, things go bad and Jack eventually has to enlist some supernatural help to prevent the end of the world.

“One Way” by Rick Norwood is one of those “idea-driven” stories that actually works well because the scientists involved are just quirky enough that you never get bored with the theoretical descriptions. Basically, it concerns a field in which matter can only pass through in one direction. While that doesn’t sound too remarkable to most people, on a molecular level it causes all sorts of unique phenomena. Again, the entire world is threatened with destruction.

“On the Problem of Replacement Children: Prevention, Coping, and Other Practical Strategies” by Debbie Urbanski reads like a handbook for parents whose children have been replaced by fairy changelings. In the hands of most other writers, this piece would have been light comedy, but this writer takes a different route, instead exploring what parents do when their children act so unusual that they no longer seem like “their children.” The author bio reveals that Urbanski has a son diagnosed with autism and it’s impossible not to read that layer into a suprisingly nuanced piece.

Next up is “Dunnage for the Soul” by Robert Reed, easily the most disturbing piece in this issue. The story begins with scientists discovering an energy field that they believe to be the soul. The fact that they discover these “souls” in species other than human is given some mention, but the bulk of the story concerns the small group of men and women who lack this energy field and are therefore considered to lack souls. Slowly, these “soulless” people are relegated to second-class citizen status.

“Alexandria” by Monica Byrne just barely qualifies as science fiction, as it tells the story of a woman coping with the loss of her husband, intercut with quotes from future magazines about the excavation of her home in an archaeologic dig hundreds of years from now.

“Wetherfell’s Reef Runics” by Marc Laidlaw is a sort of supernatural mystery in which a used bookstore owner pieces together the circumstances of a drowning that results in an unusual book landing in his shop. The trick solution actually worked for me and this story was helped greatly by the fact that the characters were so interesting.

Finally comes “There Used to be Olive Trees” by Rich Larson, one of those “idyllic gated future community surrounded by dystopia” tales in which a gated community character makes a journey into dystopia. The best science fiction tales find ways to tell stories about the here and now, while setting them far in the future or on distant worlds. In this story, Larson manages to sneak up on the reader by talking about something other than what we might expect from such a story (hint: it’s not about class inequality, at least not in the way you think).

All in all, a nice collection of stories with a near-even mix between science fiction and fantasy.

If you haven’t already, have a quick look at the classified ads in this issue. One of them is a fun little Easter egg.