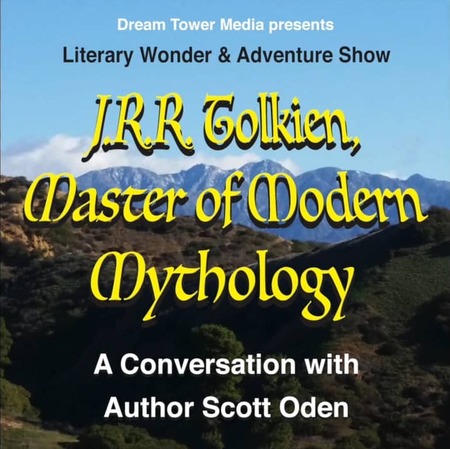 I really enjoyed the last audio show from Dream Tower Media, a lively conversation with Black Gate blogger Ryan Harvey on Edgar Rice Burroughs and his enduring works. So I was very pleased to see Robert Zoltan and his co-host Edgar the Raven return last month with a brand new episode of their Literary Wonder & Adventure Podcast, a conversation with author Scott Oden (Memnon, The Lion of Cairo) that delves deep into the history and writing of J.R.R. Tolkien.

Once again, calling this a podcast doesn’t do it justice, as it’s really a professionally-produced radio show set in the dimension-hopping Dream Tower (with a talking raven). It opens with a trip to Middle Earth, a visit from a lost Nazgûl, and mis-dialing Sauron on a palantir. But the show eventually settles into a fascinating discussion on the life and work of Tolkien, with some lengthy asides to delve into Robert’s theories on the origins of the creative drive (and the evils of world-building).

Scott makes a terrific subject, sharing his story of hammering out three chapters of a Conan novel before turning to history as a source. And his tale of how writing — producing his first novel, Men of Bronze, with a razor-blade sitting next to him — literally saved his life, is riveting stuff. His new novel, A Gathering of Ravens, is coming from Thomas Dunne Books in June.

Check out J.R.R. Tolkien, Master of Modern Mythology: A Conversation with Author Scott Oden, and all the episodes of the Literary Wonder & Adventure Podcast, here.

Thanks John! Edgar the Raven and I give it our all for the listeners every month, and then, give a little more. March’s show will be Robert E. Howard, Master of Sword & Sorcery: A Conversation with Author Howard Andrew Jones. Until then…

I completely agree. The Literary Wonder and Adventure Podcast is awesome! I’ve listened to all three episodes and they’re very well done. I actually feel bad just listening to these for free. Robert Zoltan, you should get some remuneration for these. Are you on Patreon?

To my mind this is your most enjoyable podcast so far, but less for the solid insights into Tolkien and more for the earnest personal comments from Oden.

Looking forward to Oden’s new novel, and wishing I could get a look at his false start with Conan.
He got three chapters into his Conan pastiche before coming to his senses. I finished mine before doing that.

John H., I wish I had a copy in digital form that I could upload and share with the world. Alas, it was written back in the hoary days of typewriters and clay tablets 🙂