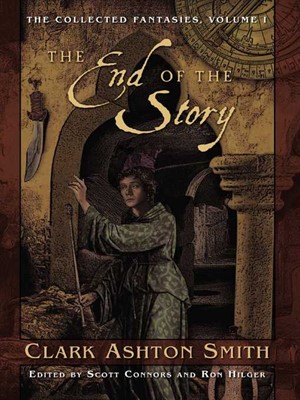 I’ve read the complete works of Clark Ashton Smith. And I’ve been known to write at length about them, or to chat with journalists on the topic. There’s nothing unusual about this, since Smith ranks among my favorite five or so authors of all time.

But only recently did I decide to undertake reading his fantasy stories in the original order he wrote them. I can thank Night Shade Books’ five volume series, The Collected Fantasies of Clark Ashton Smith, for making this an easier task than it would’ve been only a few years ago. When the series started to appear in 2007, the hardcover volumes went out of print rapidly. Even a hardcore fan like myself couldn’t justify a purchase of one of the high-priced used copies.

However, as of 2016, all five of The Collected Fantasies are now available in inexpensive trade paperbacks that can be purchased through online retailers with a few clicks. The texts for these volumes have been meticulously prepared (no simple feat considering the revisions and alternate versions published in the past) and offered in the chronological order of composition.

I’m taking a stroll through these editions to read the stories as they were imagined and committed to paper. Instead of regaling you with further long essays, I’m going to take on the role of sightseer, bringing back notes and a slideshow presentation about the best — and the rest — of each volume.

By the way, if you are new to Clark Ashton Smith, the Night Shade editions aren’t the best way to start out. They’re aimed at the collector and long-time connoisseur. I recommend the Penguin Classics collection The Dark Eidolon and Other Fantasies as a better Smith introduction. If you like the heady journey, there’s much more to explore in the dark fathoms below…

Vol. 1 features the stories Smith wrote from February 1925 to July 1930. Each is listed with its original place and date of publication — often many years from when it was first composed, and sometimes in a modified form different from the corrected text offered here.

It’s easier to make the choice for the best in this collection than for the later volumes, since there are far more minor works in the contents. During this period, Smith was still apprenticing as a prose fiction writer. He made a number of wrong turns into styles that didn’t suit him, sometimes to attempt to secure a sale. Simply put, fewer of CAS’s big “hit numbers” appear in this playlist.

My pick for the best of the collection is “The Tale of Satampra Zeiros.” It’s prime CAS with no growing pains evident. This first Hyperborean story is a delight of ironic comedy featuring a sardonic narrator, a journey into an otherworldly and ancient setting, and a horrific finale. It’s also the first story with Tsathoggua, the Toad God, whose nasty eminence is one of Smith’s major benefices to the Mythos pantheon. In every way, “The Tale of Satampra Zeiros” is an All-Star Story.

Each of the stories in the volume which is the first appearance of one of Smith’s famous settings are among the top of his early work: “The Tale of Satampra Zeiros” for Hyperborea, “The End of the Story” for Averoigne, and “The Last Incantation” for Poseidonis. These locales set the author’s imagination afire, and he followed through with plenty more. “The Last Incantation” is my pick for the second best work here: it contains powerful regret and an astonishing vision of the world of a sorcerer. However, its superb sequel, “The Death of Malygris,” will have to wait until a future volume. 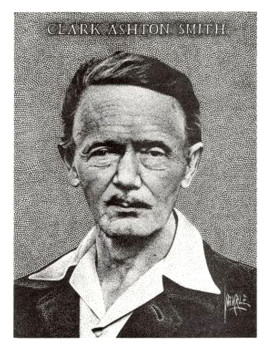 Smith had a special affection for “The Uncharted Isle”; an affection I share, although not as passionately. It takes a standard shipwreck tale and creates a wonderfully weird story about alienation. There’s a touch of the isolation and loathing of the sea from the work of William Hope Hodgson, but the prose and culture of silent scientists is pure CAS.

Two of the earliest stories, “The Abominations of Yondo” and “The Ninth Skeleton,” deserve special mention because they show how strong Smith was with his poetic effects from the start. Of course, he already had years of writing verse to prepare, and these stories feel like extended prose poems: scant plot, but powerful effect from the intoxication of lingua esoterica.

Although it runs overlong, “The Monster of the Prophecy” has a lovely xenophiliac conclusion and a message to all the poets who feel the world has rejected them. It’s a rare romance from Smith that allows the romance to blossom.

Of the more conventional science-fiction stories, “The Immeasurable Horror” stands out for how it pits its space explorers against a singular grotesque creature. Smith wrings plenty of suspense from the ship trying to escape a miles-long protoplasm that seems to have a vengeance quest. It’s a bit better than the still excellent Venus story that immediately follows it, “A Voyage to Sfanomoë,” which is part of the Poseidonis series — the story where Poseidonis at last submerges. It features a final transformation that other writers would make into a horror but which Smith sketches as beautiful. The two stories make nice side-by-side pieces to close out the collection.

Although it really doesn’t qualify as one of the best, I found “A Murder in the Fourth Dimension” surprising when read in the context of these early stories, since I had only read it online previously and not as part of any collection. If you place it among some of Smith’s finest work it does seem a bit tattered and small, but its mixture of Edgar Allan Poe and dimensional traveling is a pleasure to read among these more minor stories. The main character’s petty nature and borderline insanity — he discovers travel to the fourth dimension just so he can lure a man he doesn’t like there and stab him with a hunting knife — does make up for the scant amount of the strange, and the concept of a murderer trapped forever with the non-decaying body of his victim is solid.

The worst stories here are merely forgettable and middling, which is actually a stern criticism when directed at Clark Ashton Smith. “Resurrection of the Rattlesnake” is definitely the least of the works here, and that’s an opinion Smith would likely share since it partakes so little in his delight in the bizarre. It’s conventional to the point of feeling like a campfire horror story somebody spiced up with antiquarian characters. 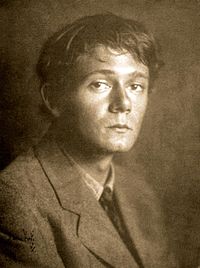 Close to it in ordinariness are “Thirteen Phantasms” and “The Phantoms of the Fire,” although the latter has Smith exploring the forests around Auburn with vivid local color. The mind-travel story “The Necromantic Tale” is also flat, and pales compared to another mind-travel tale in the volume, “The Planet of the Dead,” which examines the doomed romance idea with more passion.

Two of the longer stories, “The Venus of Azombeii” and “The Metamorphosis of the World,” have Smith playing around in different story types than usual for him, and not to huge success. Both have some excellent parts, however. “The Metamorphosis of the World” feels like the start of a Roland Emmerich SF disaster film, where alien invaders create colossal global disasters to terraform the Earth for their own use. “The Venus of Azombeii” strangely lacks any supernatural material, although Farnsworth Wright at Weird Tales purchased it on first submission. It’s a standard Colonial Horror/Dark Continent yarn, with all the modern discomfort that implies. But Smith also put a cross-racial romance in it, which is definitely unorthodox for the early 1930s. “The Root of Ampoi” goes into the similar colonial explorer territory, and throws in an intriguing slant on gender roles for some satiric color. But it’s more blandly written than “The Venus of Azombeii”; it’s no surprise Smith had a low opinion of “The Root of Ampoi” and didn’t get it into print until 1949.

“Marooned in Andromeda,” the first of three space-adventure tales featuring Captain Volmar and his crew, is a traditional tale of space-farers in an alien setting. It’s similar in a number of ways to “A Martian Odyssey” by Stanley G. Weinbaum (1934), but more grotesque. But it’s still not alien enough for CAS, and the ending is pat and unlike the lovely ironies Smith would often use to close otherwise bleak stories.

Our previous coverage of Clark Ashton Smith includes (and this list is growing colossal):

Ryan Harvey is one of the original bloggers for Black Gate, starting in 2008. He received the Writers of the Future Award for his short story “An Acolyte of Black Spires,” and his stories “The Sorrowless Thief” and “Stand at Dubun-Geb” are available in Black Gate Online Fiction. A further Ahn-Tarqa adventure, “Farewell to Tyrn”, is currently available as an e-book. Ryan lives in Costa Mesa, California where he works as a professional writer for a marketing company. Occasionally, people ask him to talk about Godzilla on interviews.

Clark Ashton Smith is my favorite short story writer. I agree with you perfectly about what’s good and not-so-good about this volume. My very favorite is Satampra Zeiros, but I’ve always had a special affection for Sfanamoe, which is beautiful, horrifying, and bizarre all at once. Few other writers could achieve such a synthesis.

When working through these volumes myself, I was surprised by the science fiction stories, particularly the Captain Volmar stories, not so much because of their excellence – though they are pretty good – but because they’re less well known than his morbidly fantastic stuff and have their own distinct style. In general, I look on CAS as a master stylist, and am always fascinated by the way his voice varies from story to story, depending on which of his milieus he’s writing in.

I’m glad to hear that these volumes are more available. I’ve listened to the audiobooks – which are very good – but I think I’ll be getting the paperbacks now.

I’ve been very slowly making a similar journey myself — I’ve read the first two volumes, and am looking forward to continuing into the third because I believe that’s when we’ll hit peak Zothique.

But once I’ve gone through the full five-volume (plus bonus volume) set once, for future readings I’ll probably be more selective — the Ballantine Adult Fantasy or Necronomicon collections, and/or the Arkham Rendezvous in Averoigne (with lovely, lovely J.K. Potter illustrations), e.g. Oh, and the Centipede Press Averoigne collection that came out last year.

CAS was, to my mind, the best of Weird Tales’ big three. Seminal as Howard and Lovecraft are, it’s Smith that I return to most often. What he gives you, you can get from no one else.

After years of watching the ridiculously soaring prices that the hard covers commanding online, I was thrilled when Night Shade began releasing these same volumes in affordable paperbacks last year. I got the first two and then forgot to keep up. Thanks for reminding me with this post!

One of the few “fancy” hc collections I’ve sprung for over the years. Easily my favorite of the Three Musketeers.

Another cogent and perspicacious post, Mr. Harvey. Always a pleasure to peruse one of your literary tributes to our mutual Emperor of Dreams.

I like how you made note of “The Uncharted Isle.” A fine tale and one that shares many fascinating similarities to Robert E. Howard’s unfinished yarn which was written at roughly the same time, “The Isle of Eons.”
All this, despite the fact that neither author could’ve read the other’s story. Perhaps it shouldn’t be so surprising, since similar coincidences happened a few other times between the two authors.

As far as “Resurrection of the Rattlesnake” goes, I wonder how much of the character Arthur Avilton was influenced by Arthur Avalon (John Woodroffe), a contemporary of Smith who wrote about such things as kundalini or “Serpent Power”.