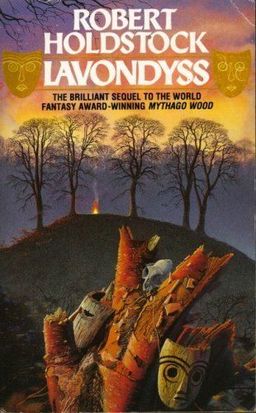 There are a few novels I will return two over and over. García Marquéz’ One Hundred Years of Solitude is one. Dan Symmons’ Hyperion is another. I’ve been back to R. Scott Baker’s Prince of Nothing series a few times.

But my pile is shrinking. I’ve grown as a reader and can’t read Dune anymore, and I haven’t tried to go back to Tolkein in probably a decade. But one truly haunting work is Robert Holdstock’s Mythago Wood and Lavondyss. The novels won the World Fantasy Award in 1985 and the BSFA Award in 1988 respectively, if my dates aren’t off.

The two novels center on three families who live around Ryhope Wood, which is one of the last ancient, undisturbed forests in England, meaning that its roots and its ghosts are truly ancient. Now, there are lots of people who evoke deep time in their writing. Tolkein obviously. Edgar Rice Burroughs. Steven Erikson.

But reading Holdstock is to viscerally experience layers of deep, Jungian time. The wood is haunted not by ghosts of the past per se; it is haunted by the ancient memories of ghosts that each person carries within them, all the legends, remembered in story and forgotten. 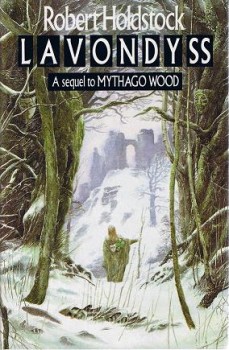 Robin Hood becomes not the charming Disney romp, nor the cheerful pulp adventurer, but an ancient fugitive and highwayman moving in stealth in the woods.

King Arthur becomes only the latest layer of questing heroes, who prior to being knights were hunters, and before that, in the very, very ancient ice age that gripped England, they were the probing trailblazers looking for some way off the ice to find something to eat in a supernatural winter.

In the first novel, the sons of a scientist who was studying the myth-generating properties of the wood both fall in love with an ancient, pre-Arthurian Guinevere archetype, and voyage into the forest for her.

They become not just part of an archetypal story of two brothers vying for the same woman. They become trapped in the haunted forest, because it is defended.

It pushes away strangers, but once those strangers have been around long enough to start feeding the forest with ur-memory, they become drawn in.

But those who enter the wood have very little control. The forest is larger on the inside than on the outside, and it is layered, its paths twisting into inescapable loops that have very few passages between.

And, spookiest of all, the deeper one penetrates into the forest, the deeper into the ancient legends one reaches, and the faster time passes there compared to the outside world. 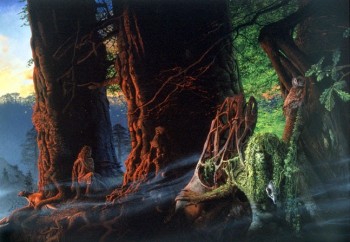 Holdstock uses this for particular effect in the second novel, Lavondyss, where Harry Keeton, a character from the first novel, has managed to penetrate all the way to the ancient center of the wood, and finds not paradise, but the hell of the underworld, the last ice age.

His mind produces legends and images that manage to travel all the way from the center of the wood to the outside world to seek help, and reach his sister Tallis too early – they arrive first to Tallis and Harry’s grandfather, and then finally make contact with Tallis during her christening.

This is trippy time travel, but some of the most brilliant I’ve ever seen. And the nature of the magic and fantasy, and the meta-narratives running through the stories is unsettling, and at some times disturbing.

We think of the ancient past as being some place that would be interesting to visit, but the behavior, the attitudes and worldviews of prehistoric people feel very plausible in Holdstock’s work and they are scary too.

I’m going to finish reading both novels, as I’m getting myself geared up for writing an epic fantasy this year and part of my process is seeing what other authors have done with the material. But even if you’re not looking to write an epic fantasy, if you haven’t read these, your fantasy education is in jeopardy (two World Fantasy Award winning novels!).

Endnote: Holdstock wrote more in this cycle that I’m going to check out, and Fletcher Vredenburgh reviewed one of Holdstock’s early novels for Black Gate right here.

Derek Künsken writes science fiction and fantasy in Gatineau, Québec. He tweets from @derekkunsken. He’d love to give more news, but most of what he wants to say about his writing is under embargo… Le sigh.

“I’ve grown as a reader and can’t read Dune anymore” – my condolences.

Haha. Thanks Barsoomia. It’s been tough, but I’ll get through it somehow. In seriousness though, I didn’t mean to sound like an ass – I should have said “my tastes have changed”. I’m not looking to knock anyone who likes Dune, but I can’t handle the clunky prose anymore. There are a lot of writers I drop into that box. Mario Puzo. Late-career Asimov and Katherine Kurtz. Etc.

🙂 and on a differ at note, Hyperion is a standard for me too.

I’ve only read Mythago Woods. It’s one of the more intoxicating books I’ve read, drawing you in as deeply as Ryhope Wood grabs Stephen Huxley. I’d like to get to one or two of the others this year.

Hey Fletcher! I find Lavondyss superior to Mythago Wood, despite how great Mythago Wood is. Holdstock takes us far, far deeper into the implications of Ryhope Wood in the second.

I loved Mythago Wood when I read it back in the mid-90s. I also found The Hollowing, the 3rd in the series, to be particularly fascinating.