I think we can all remember a time when, with the possible exception of soap operas, TV shows had one lead character. Even when it was a sitcom, and the lead character was married, there was still only one lead. Often these shows were easy to spot because they identified the character in the title of the show. I Love Lucy. The Dick van Dyke Show. The Rifleman.

The first show I remember having an ensemble cast is Hill Street Blues (1981-1987). It was also the first show I remember having ongoing narratives that spanned episodes, something else we see a lot of today. It was closely followed by St. Elsewhere (1982-1988). More recently, sort of between then and now, we’ve got The West Wing, Sports Night (thank you Aaron Sorkin) and the CSI and NCIS franchises. Though we could argue that in these last two shows what we have is an anchor character, in the person of the better known actor, surrounded by the rest of the ensemble. 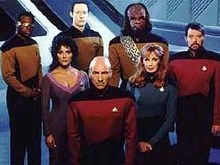 If we want to get away from network TV, we’ve can point to Homicide, The Wire, and Game of Thrones.

I’m not saying that TV shows with a single lead character don’t exist today, but I don’t think they’re the norm anymore. Even shows like Bones, or Castle, which bear the name of one of the characters really have at least two leads.

Of course, like most TV, all of these are genre programs. Medical. Legal. Police drama. So what about our genres? What about Fantasy and SF TV?

I think the earliest SF TV programs followed the lead-character template of other genres – certainly if we go back as far as Flash Gordon or Buck Rogers. I think most of us would agree that with Star Trek TOS we’re looking at a lead character, Captain Kirk, surrounded by his supporting cast. Sure, there were episodes in which one of the supporting characters took centre stage, but the problem-of-the-week was generally solved by Kirk.

But then we come to Star Trek TNG, which definitely has an ensemble cast. For the first time we saw the captain staying on board the ship while the other officers led away teams – something, I am told, that is much more like the Navy in real life. I think I could safely say that the ensemble cast became the norm for the Star Trek franchise. I think we see the same phenomenon in the Stargate franchise as well.

With Marvel Agents of Shield, we might have, at least to start with, an example of an anchor character surrounded by an ensemble, while Agent Carter definitely followed the lead-character premise. In this, Marvel goes both ways. Sure we’ve got Iron Man, and Thor, and Captain America, et al. But we also have The Avengers. And getting away from Marvel, let’s not forget the Star Wars franchise. Or Lord of the Rings.

On a final note, what about shows like The Flash, Arrow, and Supergirl? At first glance they seem to be in the lead-character-in-title class. But I think they really have ensemble casts, don’t you?

Oh yeah, and going back to my second paragraph for a minute, which came first, the extended narrative, or the ensemble cast?

“Oh yeah, and going back to my second paragraph for a minute, which came first, the extended narrative, or the ensemble cast?”

I’d associate ‘Hill Street Blues’ with both innovations. It was a seminal series in that respect.

I don’t watch much television these days (well, I don’t watch any television at all, apart from the odd box set) but back when I did, I noticed a shift in attitudes post-9/11 and specifically in relation to crime series (and I appreciate there are exceptions to this rule): the solitary genius was a feature of detective series from the Seventies and Eighties (Columbo/Cannon etc). Now we associate ‘solitary’ with characters like the unabomber. By extension, crime-fighting is depicted as a group endeavour, and a celebration of the team spirit, with the solitary criminal as the threat. ‘Criminal Minds’ was a pretty typical example, last time I saw it. However, this could have as much to do with budget (70’s detective series were probably shot on a shoe-string, so less characters) and story arcs (more regular characters means more story arcs for the audience to follow) as anything else.

Aonghus, I’d have to say your thinking mirrors mine, though I hadn’t considered the 9/11 angle (maybe because I’m Canadian). The timing, as you suggest, supports your hypothesis. A while ago I did a post on the solitary genius, and how it used to be okay to be one, and it still is, providing that person is shown as broken in some way, viz Sherlock Holmes in his latest incarnations.
https://www.blackgate.com/2015/01/16/smart-guy-huh/

And even Sherlock has a significant other!

I should add that I’m Irish, so your opinion is as valid as mine re whether 9/11 was a factor (if not more so, given the proximity of Canada to the US).

I thought you might be, from the spelling of your name, but I didn’t know that you were actually in Ireland.

With regard to Sherlock, the Watson character has been given a much larger role in the modern versions, hasn’t he/she? I think this further supports your idea that the zeitgeist is calling for teamwork: even the loners have more than sidekicks now.