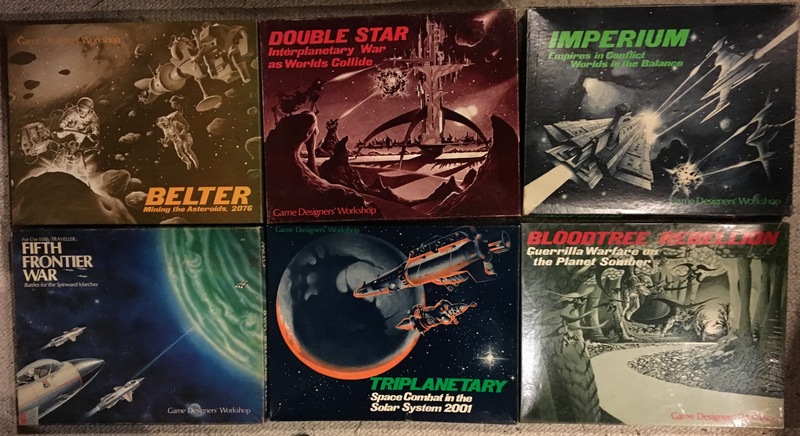 Just a few of the classic SF games pubished by GDW

Wiseman was a name well known to old-time gamers. With Frank Chadwick, Rich Banner, and Marc Miller, he co-founded legendary publisher Game Designers’ Workshop in 1973. GDW published some of the greatest SF and fantasy boardgames and RPGs ever made, including Traveller, Twlight 2000, Space 1889, Gary Gygax’s Dangerous Journeys, Imperium, Fifth Frontier War, Mayday, Azhanti High Lightning, Dark Nebula, and countless others (Wayne’s Books has a nice summary of the Traveller Universe board games, and there’s a compete list of GDW’s gaming output at Wikipedia).

Many tributes have been pouring it on Facebook and other places — including one from Jolly, who credits Wiseman with giving him his start in the gaming industry. In addition to his lengthy list of credits as a game designer and publisher, Wiseman was also editor of the Journal of the Travellers Aid Society and Challenge magazines. After GDW closed in 1995 he joined Steve Jackson Games, where he became the Traveller Line Editor. He received the Origins Award for Best Role-Playing Adventure (for Twilight: 2000 Going Home) and was inducted into the Origins Hall of Fame in 2003.

For all his other accomplishments and accolades, I still primarily think of Wiseman as an old-school gaming entrepreneur and publisher. GDW was one of the greatest and most prolific adventure game publishers, and they left an indelible mark on the industry in their 22-year history. Their games are still hotly sought after today, and I must admit, I’ve hoarded one or two in my basement over the years. 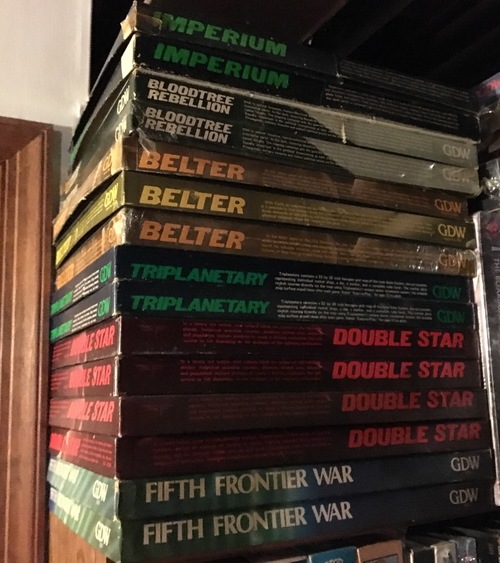 Vintage GDW games can be hard to find. Because I have them all

Loren Wiseman died of a heart attack on February 15, 2017. His age was not disclosed.

I was about to ask, why do you need multiple copies of the same game? And then I realized that I do the same thing.

Loren will be missed 🙁

Like many a grognard gamer, I hold the view that GDW made some of the best Sci-Fi boardgames and RPGs of the ’70s and ’80s. …I came across a copy of Azhanti High Lightning after I’d lost touch with my teenage gaming group, couldn’t find anyone interested in playing, but I kept it lovingly on my shelf for a few years, occasionally taking it out, and drooling over the deck plans like Golem’s “Precious.” 😉

Thanks for keeping us up-to-date Mark

Sad news. I went out last year (or was it the year before?) and replaced/completed my Classic Traveller collection — I had the big, floppy books but they just weren’t an adequate substitute for the original little black books …

And your stack of games fills me with awe and envy, John …

> I was about to ask, why do you need multiple copies of the same game? And then I realized that I do the same thing.

Well, as you’re probably aware yourself, I hardly need multiple copies of a single game. I’m a collector, so I do like to keep and preserve a copy, and if it’s a game I love, I also like to having a playing copy.

All the other copies are just accumulated. Sometimes because I buy a collection that comes with games I don’t need. Sometimes I just find a copy at a price I can’t resist. Sometimes they’re gifts. Sometimes there’s something wrong (missing components, whatever) with the first copy I find, and then I have to go out and pay a crazy price to get a perfect copy (usually two weeks before I find a second perfect copy in a neighbor’s garage sale for $5).

> I came across a copy of Azhanti High Lightning after I’d lost touch with my teenage gaming group, couldn’t
> find anyone interested in playing, but I kept it lovingly on my shelf for a few years

Believe it or not, Azhanti High Lightning is one of the few GDW SF games I don’t have. Most of the copies I’ve come across are damaged or incomplete. It’s a hard game to get in great shape. I don’t blame you for cherishing yours!

> I had the big, floppy books but they just weren’t an adequate substitute for the original little black books …

Yeah, I understand. I wouldn’t give up my copy of Traveller: The Classic Games for anything, but it’s really more useful as a reference than a functional equivalent of the games (and a replacement rule book, of course). Sure, it has all the maps and counters reprinted inside in b&w, but it’s mostly just a kit that hobbyists can use to create copies of the game.

Here’s the front and back covers for those who don’t know what we’re talking about (click for bigger versions). Released by Marc Miller/Far Future Enterprises about a decade ago, and now long out of print. 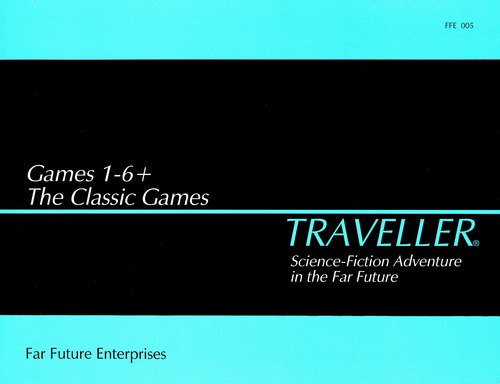 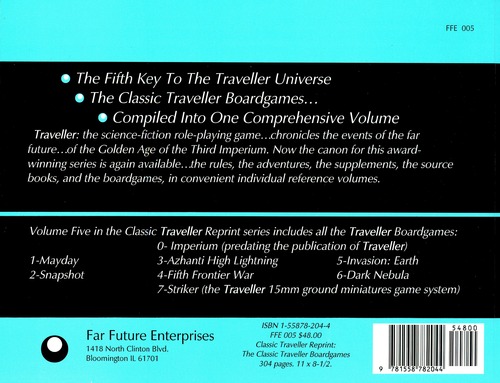 I talk more about this book in my article on classic Traveller games.

So sad to read about the death of Mr. Wiseman. Ave atque vale! Of course, since we in the far future 16 years past the time of Triplanetary: Space Combat in the Solar System 2001, we should expect to lose some of our pioneer spacefarers.

And it appears that Imperium tops the list of O’Neill games, with neither copy looking particularly shrink-wrapped and unplayed. Wise choice, sir, wise choice.

> it appears that Imperium tops the list of O’Neill games, with neither copy
> looking particularly shrink-wrapped and unplayed. Wise choice, sir, wise choice.

What can I tell you? Imperium was the first GDW game I ever owned, and it taught me what space board games were supposed to be. I learned that lesson well!

I didn’t know that Loren had died (pretty late in getting the news). I’ve corresponded with Marc a few times and he’s been a super fellow. I think I’d have liked all of the GDW folks. Kinda sad how a seemingly great potential opportunity in the form of getting into large chain bookstores ended up being a major factor in the downfall of GDW… that’s a decision I bet every one regretted.

I’ve got Imperium, 5th Frontier War, Beltstrike, but I don’t have Triplanetary or one of the other ones. I was, for the most part and for many years until very expensive kickstarters got beyond my means, a completist. I E-bayed a lot of oddball items – ship minis, 3rd party products from small fanzines and supplements through more common 3rd party stuff (Mountain/Undersea/Desert Environment, Ascent to Anekthor, Legends of the Sky Raiders and so on). I had a lot of the Judge’s Guild items and they weren’t great, but there were some useful stuff you could build on (though something like the Pilot’s Guide to the Reaver’s Deep was easier). I even found 25mm minis from different companies that were striking close to Zhodani Marines and Imperial Marines.

I enjoyed 5th Frontier War’s asymetric aspect. I also played one very quirky game of Beltstrike where the prospector players took on the central authority and took out their military force leaving them largely impotent. That was kind of a surprise but largely happened because the player running the central authority was about as undiplomatic and annoying as one can imagine and thus he drew the ire of the other players.

Traveller was the first game that I played that didn’t have levels and where characters showed up fully competent and skilled. That changed my view of gaming (formulated by early D&D and other similar FRPGs) dramatically.

I’ve run quite a few Traveller campaigns and I’ll be using the rules mechanics for another one soon (not 3rd Imperium though this time).