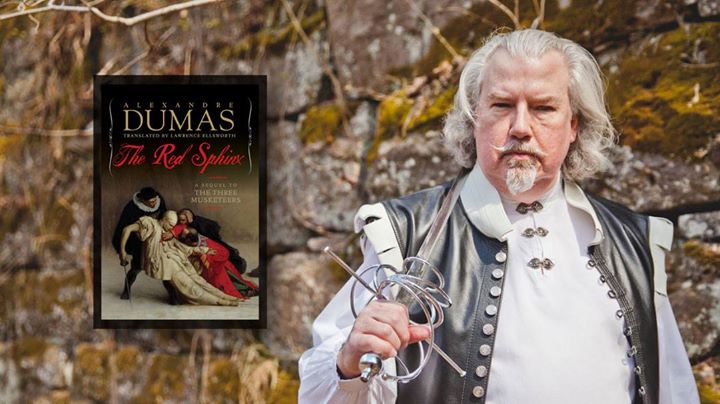 Lawrence Ellsworth (known to gaming fans as Lawrence Schick, creator of White Plume Mountain, and the lead writer for The Elder Scrolls Online), has written many popular articles for Black Gate over the years, including one of our top posts of 2015, “The “Known World” D&D Setting: A Secret History,” and more recently his fabulous Silent Screen Swashbucklers series.

In addition to his renowned gaming work, Lawrence is also a popular author and translator in his own right. His most recent release is a brand new translation of a nearly forgotten novel by the great Alexandre Dumas, author of The Three Musketeers and The Count of Monte Cristo. (That’s Lawrence above, showing off both his new book and his dashing wardrobe.)

The Red Sphinx, a sequel to The Three Musketeers that picks up where that book ended, is a massive 837-page tome that Michael Dirda calls “As fresh as ever… excellent, compulsively readable” in the Washington Post. It was published in hardcover by Pegasus Books on January 3.

Originally called The Comte de Moret, The Red Sphinx first appeared during 1865 in Les Nouvelles… For this handsome new edition — the work’s first translator since a wretched 19th-century version — Lawrence Ellsworth appends a related novella titled “The Dove,” which brings the adventures of the Comte de Moret and his beloved Isabelle de Lautrec to a dramatic, nick-of-time close.

Yet the Red Sphinx himself, as the historian Michelet dubbed Cardinal Richelieu, wholly dominates the book’s 800-plus pages. The action begins in December 1628, shortly after the French victory at La Rochelle chronicled in The Three Musketeers. A mysterious cloaked hunchback tries to hire a down-on-his luck swordsman named Latil to murder the Comte de Moret. That young man, the illegitimate son of the late Henri IV, has just arrived in Paris from Italy, bearing secret letters for Marie de Medici, Anne of Austria and Gaston, the duc d’Orleans…

So, en garde! In Lawrence Ellsworth’s excellent, compulsively readable translation, The Red Sphinx is just the book to see you through the January doldrums. And maybe those of February, too.

See all of our coverage of the latest releases by BG authors here.