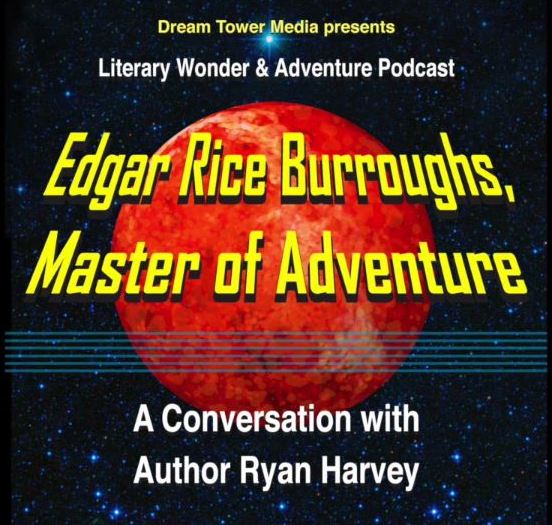 Dream Tower Media, the mad geniuses behind The Blue Lamp by Robert Zoltan (which Fletcher Vredenburgh called “marvelous… a full sound production, like a radio show”), have released Episode 2 of their new audio series, the Literary Wonder & Adventure Podcast. The title is spot on, as this one-hour episode is a thoroughly entertaining and far-ranging discussion of the great Edgar Rice Burroughs, featuring Robert Zoltan and Black Gate‘s own Ryan Harvey.

Like The Blue Lamp, this is no typical podcast, but an imaginatively designed (and frequently hilarious) radio show set in the windswept Dream Tower (with a talking raven). But stellar production aside, the real star of the show is the always-interesting Ryan Harvey, whose deep knowledge and profound enthusiasm for his subject prove infectious. Even if you’re not an Edgar Rice Burroughs fan, you will be by the end their discussion. Terrific stuff.

I was also pleased to hear that the Literary Wonder & Adventure Podcast will be produced on a regular schedule. Robert tells us:

I made a real effort to create something unique and engaging, almost like a MST 3000 feel, that would be an ongoing serial. The third episode in February is going to be Orcs!: A Conversation with Historical Fantasy Author Scott Oden.

Great news! Check out all the episodes of the Literary Wonder & Adventure Podcast here.

I’m definitely going to tune in. This sounds awesome!

Robert did an excellent job putting this together and editing it—especially considering we talked for much longer than 90 mins. A few things that didn’t make it:

1) Me recommending the movie The Witch and why I think Anya Taylor-Joy should play my character Belde in a movie version.

2) Talk of ERB’s time as a correspondent during World War II.

3) Discussion of the incredible bitterness in Tarzan and the Foreign Legion.

Bit of self promotion, the novelette we discuss at the end, “Farewell to Tyrn,” is available here at Amazon: https://www.amazon.com/Farewell-to-Tyrn-Ahn-Tarqa-ebook/dp/B006WEE4HI/ref=ntt_at_ep_dpt_1

Really terrific stuff. I’m not much of an ERB fan, but several times as I listened last night I had to stop myself from surging out of my big green chair to pull down a copy of A Princess of Mars. You are a suave and convincing diplomat from the land of Burroughs.

And a real pity that stuff about ERB’s time as a war correspondent didn’t make it in — or why Anya Taylor-Joy should play Belde! I’ll hold out hope for a sequel podcast. 🙂

Anya Taylor-Joy should play Belde because she has “the stare”: That’s Belde’s ability to uncannily make people with the Sorrow become uncomfortable with her presence just by looking at them. Plus… did you see The Witch? Kid can act.

While I generally fell that anything of merit can be approached and appreciated at any time of life, with Burroughs I really do think that you have to encounter him at a fairly early age. If you don’t, he’ll always seem stilted and outlandish and absurd; if you do, you’ll never get him out of your system, no matter how old you get.

I plucked A Princess of Mars off of a spinner rack in my local drugstore when I was eleven, so you know which category I fall into.

@Thomas – While I would agree in general on how Burroughs is a more difficult “sell” to the adult who may have built barriers against ERB’s style (which even for its day was unusual), one of the reasons that I have spent so much time writing about him on Black Gate is to give more adults a doorway to him and a method of thinking about him. And that includes talking about the not-that-great-books and showing that there are intriguing ideas there as well. I like the promoting of ERB as an interdisciplinary subject: there is so much to mine and consider, far more than at first meets the eye. I hope that I’m offering people tools they can use to enjoy ERB themselves if they’ve never read him before. I know that there is no way to reproduce the wonder I felt when I read The Land That Time Forgot at a young age (the first Burroughs book I read), but I hope I can provide someone a reason to try to seek that wonder, or find out what creates it.