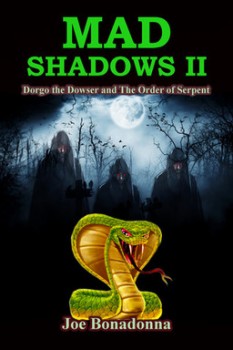 Joe Bonadonna’s a friend of Black Gate and, I’m proud to say, a friend of mine. He’s also a heck of a teller of hardboiled action and adventure tales. After too many years out of the toilsome fields of swords & sorcery, he returned in 2010 with a top-flight collection of short stories about one Dorgo Mikawber, dowser of magic and handy with a saber. I discovered Joe and that book, Mad Shadows (2010) here on the virtual pages of Black Gate, and reviewed it over on my site about four years ago.

After another significant hiatus he’s returned with a second collection of Dorgo’s adventures: Mad Shadows II: Dorgo the Dowser and The Order of the Serpent (2017). That’s a lot of title for a book that just crosses the two-hundred page mark, but it gives a nice sense of the pulpy goodness that lies betwixt its covers.

Dorgo Mikawber was raised in an orphanage, served in the army, and now makes his living as a magical investigator and finder of lost people. Last time out Dorgo’s adventures took him all over the continent of Aerlothia on the world of Tanyime. This time around his wanderings are more limited, starting in the countryside just beyond his home city, Valdar.

MS II is a fix-up. It’s made up of three separate tales, each linked to the other, weaving a larger story of Dorgo’s fight against the mysterious Order of the Serpent and its leader, Ophidious Garloo.

In the first part, “The Girl Who Loved Ghouls,” the dowser is summoned to the town of Widow’s Fell by by a woman named Valuta Jefoor. Well, really by her cat, Crystal:

Turning my eyes away from him, I gave my full attention to the cat, which at that moment pushed the remains of my dinner aside with her paw, leaned forward and, with the claws of her left paw began to scratch the wooden table. No, that’s not quite right. She carved familiar lines and circles and whorls into the tabletop. That’s when I noticed the cat’s claws were attached to five human-like fingers. As I already stated, this was no ordinary cat. When she was finished, the cat sat upright and stared at me again, quite pleased with her clawmanship.

The carvings began to glow with a soft, lavender light, a glow like the last burning embers of a hearth fire. To my amazement, I saw that these were letters forming a message — a message meant for my eyes only.

Someone is killing and eating people, and the enraged citizens of Widow’s Fell assume it’s the fault of the local ghoul population. In order to uncover the real criminals Crystal needs Dorgo to employ his talents and find the secretly buried bodies of twelve priests and retrieve their skulls for Valuta to divine the truth behind the killings.

As in any good hardboiled story, nothing is simple or straighforward. Plots wheel within plots and secret enemies lurk in unsuspected places. Before the end, death and outrage are visited on the little country village, and behind all the wickedness lurks the Order of the Serpent, an ancient cabal of evil sorcerors long thought extinct.

In Part Two, “The Book of Echoes,” Dorgo gets emeshed in the hunt for the titular book when he and a girl to whom he’s giving a ride back to Valdar are attacked. She’s killed, he’s left for dead, and the book she was carrying is missing.

The missing volume is your usual thick tome of evil and illicit magics. It’s so evil, in fact, that if you are not properly equipped to read it, it will transform you leaving you worse off than if it had just killed you:

Murek’s face and head resembled the trunk of a tree. Two small holes were all he had for a nose and mouth. His gray eyes were like caged rats, rolling from side to side. He clawed at that ghastly wooden mask, trying to tear it away from his face with hands, which were attached to the tibia of a bug. But it was not a mask at all: it was his face, forever altered and distorted. The only sound he made was a noise similar to that of a squeaky door.

The Order is discovered to be the main party hoping to snatch the Book of Echoes. There are other players as well, and Dorgo has to struggle to disentangle one villain’s agenda from another in order to find the book himself and keep it from causing any more harm.

Part Three, “The Order of the Serpent,” brings Dorgo face to face with the hidden master of the order, Ophidious Garloo, who has finally come out of the shadows, though still in disguise. There’s intrigue aplenty for Dorgo to wade through before he can understand just who is doing what to whom and why.

The story kicks off with a creeptastic bang when the Dowser is called in by police captain, Mazo. A young woman for whom he’s looked out since the death of her parents has been found in a snow-covered clearing, “stretched out as if she were about to be crucificed. A circle of nine candles surrounded her; black candles, still burning. Her eyes were fixed and open, not blinking or squinting from the glare of the sun, but she wasn’t looking at anything in this world.”

The machinations of the Order of the Serpent, slowly revealed over the first two stories, are brought home here. I appreciated the way Bonadonna parcels out the clues to Dorgo and the reader, unveiling only a bit at a time. It’s rarely obvious what’s really going on or what’s about to happen. Sure, there’re one or two occasions where the Law of Conservation of Characters makes the reveal of the villain less than surprising, but it never kills the excitiment and momentum of the story.

Bonadonna also knows how to bring on the action. There are plenty of well-choreographed fights, both mundane and magical. Never once did I not have a sense of where Dorgo, his companions, and adversaries were, something at which a lot of fantasy writers fail miserably.

He also makes magic gruesome and intimate. It’s a dangerous deed for the caster, and even more for its victim. When a foe is hit with a ball of magical fire he doesn’t just explode in a poof of smoke, but dies quite horribly:

I threw the fireball and it struck Quarg in the chest. He shrieked like a castrated horse when the fireball burst into blue, molten fire that washed over his body, turning him into a cobalt inferno until there was nothing left but ashes, two small horns and a pair of charred hooves. 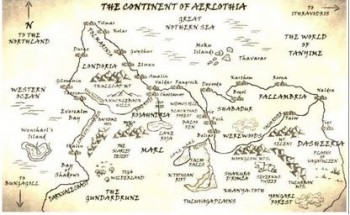 I totally dig these stories and especially the world Bonadonna’s created. Tanyime is rife with magic and magical beings. Minotaurs serve as guards, a cyclops runs a gambling den, and an old satyr is one of Dorgo’s best friends. Bonadonna’s too skilled a storyteller to let his setting become overwhelmed by the possible cutesiness of it all, instead, creating a good, hardboiled world with room in it for justice. Even if Valdar is a tough city, it’s one where the characters are able to make a place for themselves.

Aside from his deep understanding of S&S and hardboiled fiction, Bonadonna knows how to write a hero. I think one of my biggest bones of contention with a lot of contemporary fantasy is its rejection of classic heroes. Even the heroes are broken, or motivated by selfish desires, or just less of bastards than everyone else.

Not so with Dorgo. He is an honest-to-goodness hero looking to do the right thing, to help the wounded, and to defend the weak. He’s moved by a convincingly portrayed sense of empathy and desire for justice in an imperfect world. That doesn’t mean he’s a two-dimensional figure stamped out of white cardboard. He’s imperfect; not always the sharpest one in the room, and definitely not someone who is going to win most of the fights he gets in. Nonetheless, Bonadonna makes believable — and more than a little noble — Dorgo’s willingness to stride into danger for the sake of stopping some villain or righting a wrong.

I’ll say what I’ve said plenty of times before: I read fantasy for fun. I don’t want to be dragged through the mire of cynicism and ultra-violence in every story I spend my time on. Life itself is filled with more than its share of blackguards, dastards, and knaves, that sometimes a true hero is what I’m looking for.

Will these books (you don’t need to read MS I to follow MS II but you should anyway) make you a better or smarter person? Probably not. But they’ll scratch your itch for fun and exciting swords & sorcery. These stories swing with the right mix of action and mystery to satsify anyone in need of a fix of the good stuff.

Fletcher Vredenburgh reviews here at Black Gate most Tuesday mornings and at his own site, Stuff I Like when his muse hits him.

WOW! What a wonderful review — eloquent and insightful, and brimming with praise. Thank you, Fletcher, for such a splendid review of a book that took about 5 years to write. More than that, I’m so glad you enjoyed it in exactly the way I intended for people to enjoy it. Kudos to you, my friend.

I must give credit where cred it due. The book cover, the design of the book . . . the whole “package” was put together by the incredible author, illustrator, and “map artist,” Erika M. Szabo — Dorgo’s Godmother. Thank you, Erika!

Great review Fletcher. I loved MSI and a 60% done with MSII and completely concur. Dorgo is a fun mix of dark adventure, weird mystery, and humor.

“the possible cutsienss of it all,”…

I just received my hard-copy of Dorgo II in the mail today, and I’m leaving the office early to read it. Dorgo is one of the most original heroes of modern fiction, yet retains his heroic fiction genesis and sword and sorcery… well, dowsing rod and sorcery, roots. Congratulations, Joe Bonadonna. And let’s have a shorter interval between this and Dorgo III…

@SEL – Thanx! Glad to hear you like them. They deserve so more readers.

@sacredbander – Dorgo’s a solid throwback to the Golden Age. And ditto, less time next time, Joe!