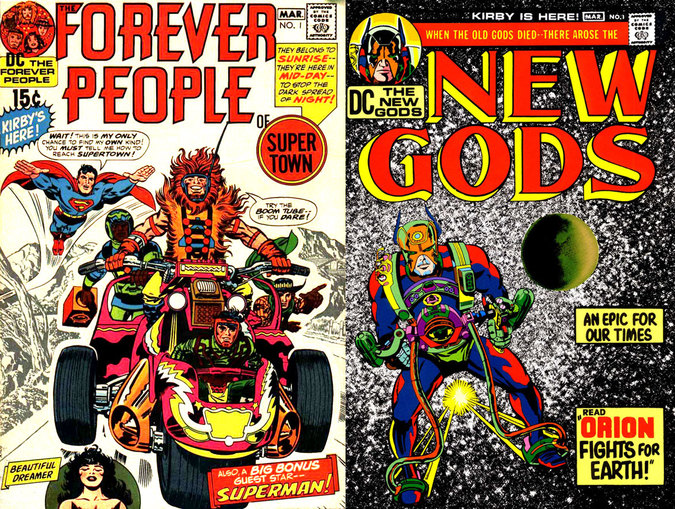 I’ve been discussing comic books with a friend of mine who moved to Ottawa. Based on a stray comment of his, I committed to tracking down and reading Jack Kirby’s 4th World comics.

I obviously know about Darkseid and the New Gods, but from later works at DC, like the classic Great Darkness Saga in The Legion of Super-Heroes (check it out!).

And I’d read lots of 1960s Marvel Kirby as well as Machine Man and The Eternals at Marvel in the 1970s (I even blogged about The Eternals here).

Kirby was *huge* in the 1960s, having been a major creator of the current Marvel Universe. But by 1970, he was looking for a change and DC signed him to a 5-year exclusive deal.

Both Marvel and DC had house styles at this time and those styles didn’t look like each other, especially Kirby’s work and DC’s, so I imagine that finding the right project for this expensive addition to their roster was a challenge. 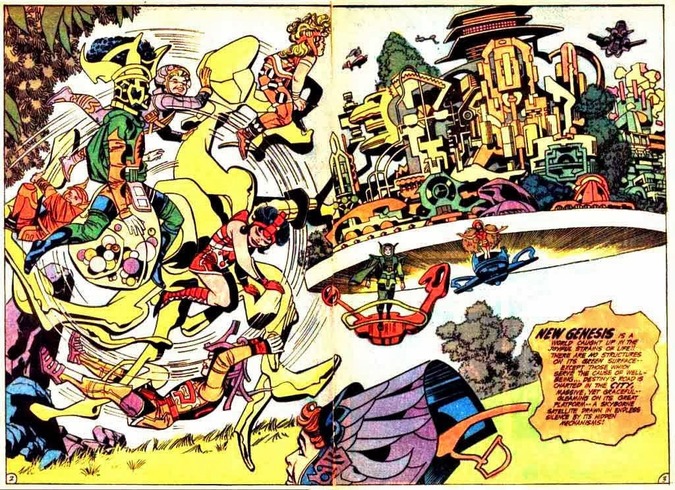 Kirby created Kamandi, The Demon and a few other things for DC, but his most enduring work appeared in four titles: Jimmy Olsen, The New Gods, Mister Miracle and The Forever People. In these, he invented Apokalips and New Genesis, two worlds filled with superhero-level people, at war with each other, the remnants of a cataclysmic war of the gods some time in the past. 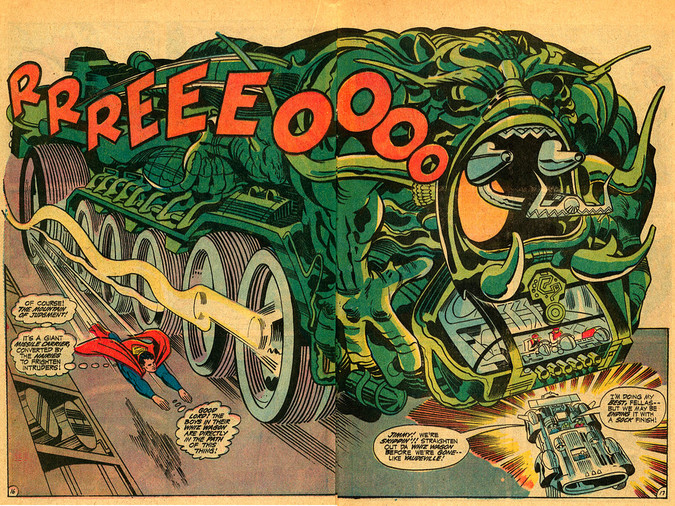 So I decided to read there in order, essentially Jimmy Olsen first, and the others getting interspersed in there as the years ticked from 1971 to 1974. My expectations for Jimmy Olsen were pretty low, as they were for Mister Miracle, an escape artist, and maybe even The Forever People, because one of them was a space cowboy and another was called Beautiful Dreamer.

First of all, Jimmy Olsen was startlingly unexpected (did you expect that big green dragon train above?) Kirby was trying things visually that I can’t remember seeing at Marvel and his inventiveness, which I’d expected to be somewhat fully explored between the Fantastic Four and The Eternals, was off the scales. I felt like I was looking at something new for the times. 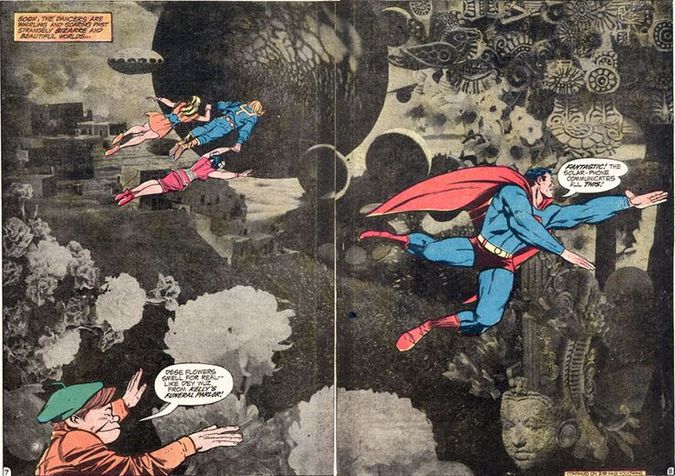 I was fascinated by the sophisticated (for the times) science fictional themes in Jimmy Olsen, like genetically-engineered and cloned people. And I was charmed in my boyish heart by the towns and complexes and people living in tunnels beneath Metropolis and elsewhere, driving around in all sorts of weird fighting cars and trains and motorcycles and boats. And, oddly enough, Jimmy Olsen is where we first get to meet Darkseid and Desaad. 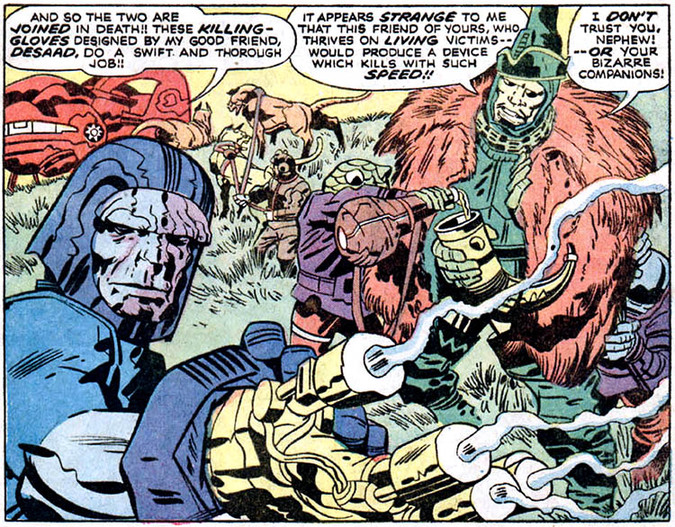 I enjoyed The Forever People as well, not as much as Jimmy. I loved their side-car-festooned motorcycle/dunebuggy and I could see totally why kids would love Kirby’s stuff. I’m almost as old as The New Gods and I still want to ride in a sidecar. I also loved the multi-leveled cynicism-satire of Desaad’s Happyland, a dark, dark Through the Looking Glass with personalized torture devices for all the guests. 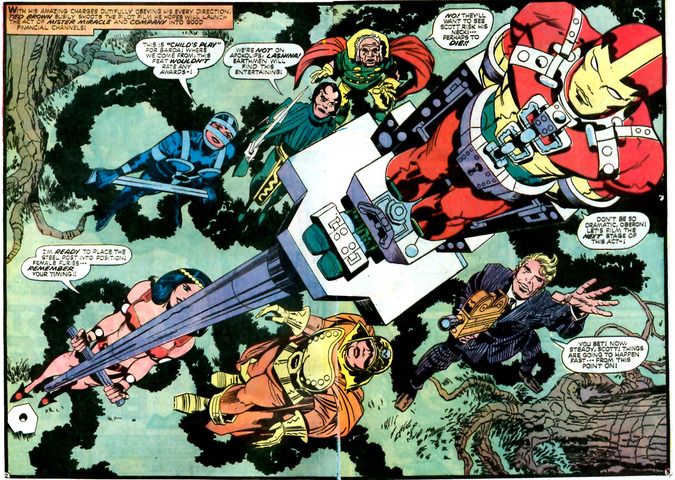 The New Gods as a series left me a bit cold. I didn’t care for Orion and Lightray, the stars. I hadn’t really cared for them when they were called Ikarus and Makkari in The Eternals over at Marvel a few years later. It wasn’t that I was expecting Kirby to be a brilliant character writer; there’s little interiority to Kirby — that was something that Lee brought to their partnership, as much as Kirby brought the mythos-concerned cosmic visual insanity. But the characters were a bit dull and the weirdness I liked in Jimmy Olsen and The Forever People wasn’t really on deck. 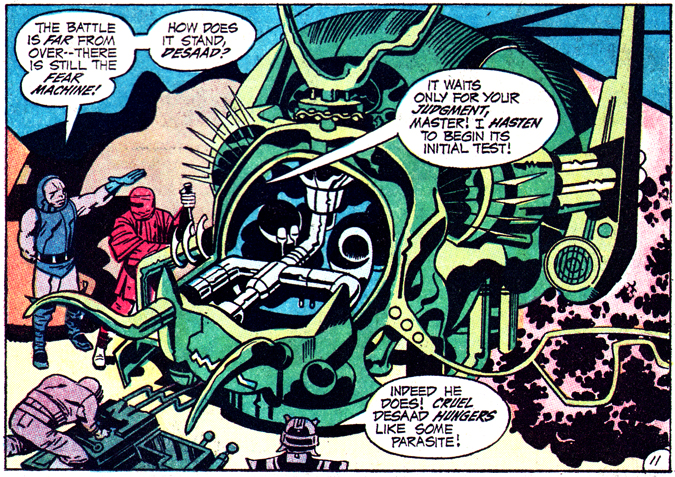 I really liked Mister Miracle though, as much as Jimmy Olsen. First of all, for the first few issues, his escapes are pretty interesting, and like a procedural TV show, he has a weird escape to make every issue. Secondly, Kirby slow-played the reveal on who Mister Miracle was — why and how he escaped Apokalips, who he really is, what it means for the politics of New Genesis and Apokalips. This kept up the tension. Thirdly, in issue #4 he introduced Big Barda. He didn’t explain their relationship, nor her past, but I think it is the first comic book appearance of a real give-no-f&%$s kick-a$$ woman. She’s a non-green She-Hulk with the table manners of X-23, and no apologies. I can’t think of any appearance in comics of such a female before Big Barda. And the ongoing romantic tension between Miracle and her is fun. 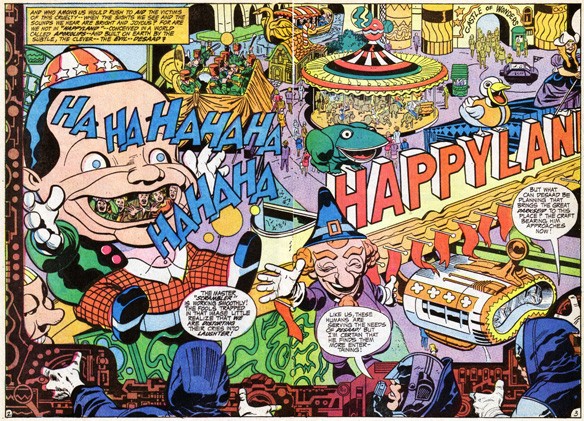 Reading Kirby’s 1970s DC work begs a comparison with his 1970s Marvel work, and also comparisons to the work he did with Lee. In terms of pure ideas, there are some he simply retreads or redevelops between DC and Marvel and even characters.

But thematically, Kirby is tremendously concerned with science fiction, but not just in a purple-guy-called-Galactus-is-here-to-eat-your-planet. He’s mythologically interested in advanced societies, how they get along, and how they can be exaggerated dramatically to comment on things like propaganda, interrogation, brain-washing, tent preachers, youth and adults, totalitarian state techniques, first contact with aliens, evolution (both directed and non-directed), and the overarching myths, both the ones his readers know about and the ones he’s inventing. 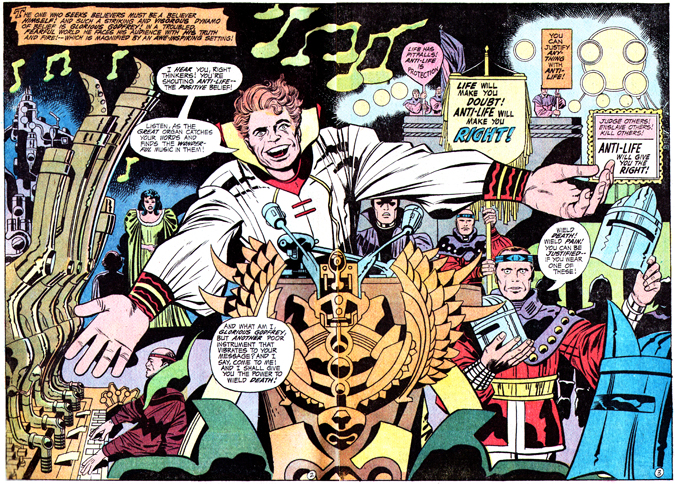 Comixology.com has all these issues and they’ll also available in many collections. I’d say that any individual issue is at least a B or a B+ and most issues, for pure innovation and inventiveness in the genre, are A- or A. Overall, this run, for pure enjoyment, or for understanding the history of comics, is well worth a read, but set aside a month!

Derek Künsken writes science fiction and fantasy in Gatineau, Québec. You can follow him at @derekkunsken.

I also wanted to add my voice to your shout-out for The Great Darkness Saga, Paul Levitz and Keith Giffen’s defining story arc for The Legion of Super Heroes, from 1982. If you’re not familiar with the Legion, it will probably be a nearly incomprehensible overload of teenage superheroes… Levitz and Giffen crammed in virtually every Legionnaire, past and present, including the Legion of Substitute Heroes, and a bunch of affiliate groups I’d never heard of.

Be warned! But if you’re a fan of DC’s supergroup, this is one of their classic story arcs.

The whole 5-issue story (including a big double issue finale) has been collected several times, and is still in print. Here’s a look at Giffen’s famous cover for the final issue. 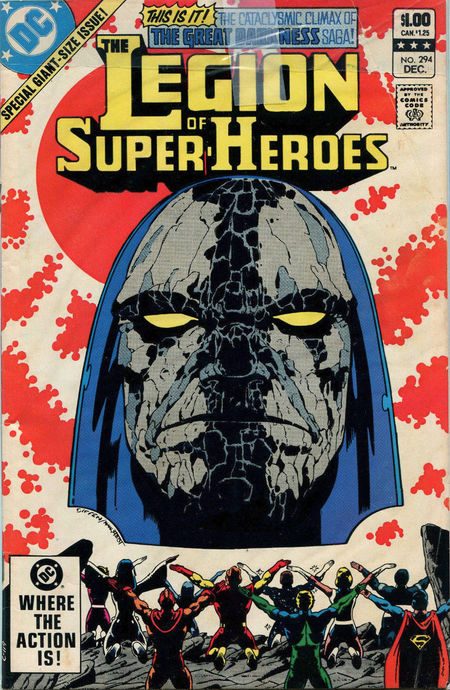 This fantastic post made my day…made my week. Many thanks superhero!

I do prefer New Gods because I love the portrayal of Darkseid and his world, and I love Orion’s conflicted nature. Orion murdering the Deep Six, including forcing Slig’s mother box to commit suicide and then laughing about it, is one of the most violent and disturbing sequences of “heroism” I can remember in any comic.

Kirby is often mocked for his dialogue, but I think his problem is really with attempting to copy Lee’s colloquial style. When Kirby writes Darkseid, his dialogue is really effective.

Kirby is also the only writer I believe ever really understood Darkseid (he did create him, after all). Most later writers interpret Darkseid as a hands-on, fights-his-own-battles type, but Kirby was consistent in portraying him as a devious and deliberately hands-off villain. He proclaims how much he hates violence and then turns his back while Kalibak pummels his enemies. When Orion and Darkseid have their final showdown, Darkseid turns tail and runs like the six-fingered man (because he wants to lure Orion into a trap where others will take him down, of course). He *hates* doing anything himself because he’s so hung up on maintaining his “clean” image.

John: I love The Great Darkness Saga! Perhaps worth a post sometime? 🙂

Hey Andy! Insightful comments. Thank you! I’ve been pondering what you said. On Orion, for the time (1971-72), I guess that would have been pretty dark. It might be I hadn’t noticed that because much of my comic reading is post-Wolverine and post Miller-Daredevil.