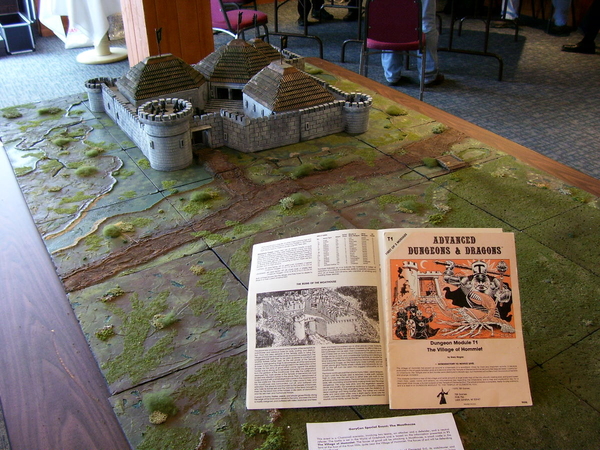 Chainmail re-enactment of T1: The Village of Hommlet
at Garycon II, 2010 (click for bigger version)

Okay — maybe a bit of hyperbole there. About a month ago, I wrote about my favorite AD&D module, T1 – The Village of Hommlet. I mentioned that its follow-up, The Temple of Elemental Evil, was delayed for several years before Frank Mentzer completed it. Read on to learn about how Gary Gygax developed Hommlet and the Temple through play sessions and my deduction of why Temple was delayed for a few years.

Gygax and Rob Kuntz were constantly adding new levels and different environments to the dungeons under Castle Greyhawk as the players continued to eat up new content, always wanting more. Gygax began focusing his attention on developing a new region, with a campaign focusing on Hommlet and the Temple of Elemental Evil. With his game simply growing too big, Gygax split it, giving Greyhawk and its dungeons to Kuntz while he continued to work on Hommlet and the Temple.

Gygax’ son and a friend were starting to play, so Gary used the Hommlet campaign as a new, low level adventure for them, distinguishing it from the high level Greyhawk play. Gygax was busy developing TSR products and the Greyhawk Supplement (I) had come out for the Original Rules.

The Hommlet campaign was different than the Greyhawk dungeon delves. There was a village, with a smithy, an inn, a local elder, set in a rural environment. The party could role play in the village then move on to the dungeons of the Temple. It’s possible that Gygax ran players through some iterations of Hommlet and the Temple in late 1975 and into 1976. 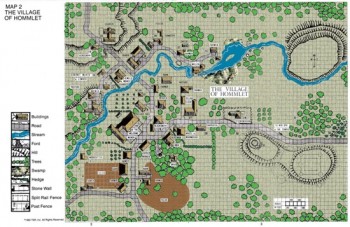 Gygax was testing out ideas in his home game for possible use in TSR products. One was a ‘random dungeon generation system.’ As he said,

The village and main temple areas were carefully mapped before I began adventure sessions in the area. The random generation was used mainly in developing the land around the village and some of the side areas surrounding the main rooms I had done for the temple dungeons.

Gygax had taken a liking to Dennis Sustare’s new Druid class and allowed Tim Kask to play one in the Hommlet campaign. That character appears as the NPC Jaboo in the module. A pair of notable NPCs came from these sessions. Ernie Gygax played Burne (B-Ernie) the Magic User, while Skip Williams (co-creator of 3rd Edition) was Rufus the Fighter. Otis, a Fighter who was switched to a Ranger, was played by Luke Gygax, which resulted in the name OtiLuke – which would pop up in a few spells.

Nira Melubb is an anagram of Brian Blume, who would play such a huge part in TSR’s future. And most of the letters in Dave L. Arneson can be found in Rannos Davl. If that’s intentional, it wasn’t exactly a hilarious joke: “slow, fat, clumsy and placid.” 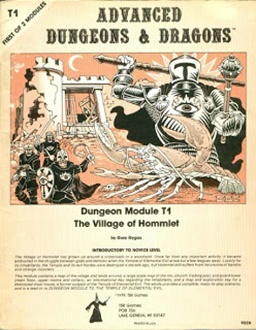 It appears that the adventurers cleared out the moat house, moved on to Nulb and then the Temple. Rather than make long treks in the dangerous dungeons (and Gary Gygax was all about ‘dangerous’), the party would undertake quick raids beneath the temple, then withdraw, rest up and head back in again.

Eventually delving deep, they discovered Prince Thrommell, who was ninth in line for succession to the crown. He was being held captive in stasis – oh, and he appeared to the group as a staked vampire.

An interesting element of Gygax’ games back in the day was that multiple characters and groups were often adventuring at the same time. And if someone took a treasure, it wouldn’t be there when someone else got there. As the party was gradually progressing, Rob Kuntz (not a member) was bored and wanted to play his powerful character, Lord Robilar, again.

Gygax had Robilar fly in on his magic carpet and enter the Temple with his mage henchman, Otto. Kuntz was a master at playing against Gygax. Instead of the in-and-out method the party was using, he wanted to blitzkrieg to the lower levels, grab the big treasures and get out before the Temple guardians knew what was going on. And he would avoid interference from the other party while snagging the loot.

Sneaking when they could and fighting when they had to, Robilar and Otto worked their way deeper. Robilar noticed magical columns throughout the dungeon and figuring they were somehow related to the grand treasure, he kept smashing them as he progressed (he had a Belt of Storm Giant Strength).

Finally, he shattered the last column and entered the treasure room. Except it wasn’t. The columns had been barriers placed by the powers of Good to chain the powerful demon Zuggtmoy to the Prime Material Plane. Robilar stepped into that chamber to find the demon unfettered. Weakened by her imprisonment but far too much for Robilar, she fled to her palace within the Abyss, taking the hero along to be her consort. Perhaps the greatest character in Gygax’ games became the servitor of a Demon Queen!

The powers of Good were unhappy that the Demon Queen of Fungi was loose again – needless to say. Even the neutral Druids, knowing the balance was way out of whack, sided with Good. All wondered who had freed her.

Robilar somehow convinced Zuggtmoy to send him back to the Prime Material Plane (probably saying he could do her work there) and she put him back below the Temple. Collecting Otto, he managed to escape to his flying carpet (where another henchman who had been waiting there had put a hole in it so he could wear it as a poncho!) and the three slowly escaped. But Tim Kask’s Druid had seen this while hiding in the woods, transformed into a falcon and followed them to Castle Robilar. The alliance of Good and Neutrality knew who to blame for freeing Zuggtmoy!

Personally, I’d have loved to see how the party reacted as they continued deeper, finding dead guardians, smashed columns and little treasure!

Harkening back to the Chainmail roots of D&D, the main players united to form an Army of Good to lay siege to Robilar’s castle. Basically, players and GM were pissed at Kuntz for screwing up Hommlet. Seeing the writing on the wall, Robilar fled from Greyhawk, leaving faithful Otto to defend the castle. Robilar and Otto remind me of Kaos and Glumshanks from Skylanders.

Unicorns, hydras, death spells: What a battle! In the end, Otto also fled and the castle was razed to the ground. Robilar had been Greyhawk’s greatest adventurer (albeit, a Lawful Evil one), but all he had accomplished was destroyed. And in the real world, it had a significant impact as well. 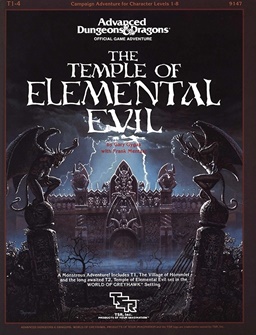 Gygax was depressed that Zuggtmoy was no longer in the Temple. There was no real reason left for the party to go back there: most of the monsters were dead, the treasure was gone and there was no BBEG to confront. As Gygax recounted,

When Robilar freed Zuggtmoy, I pretty well scrapped the idea of using The Temple of Elemental Evil for ongoing adventures for my group, vowing to get back to it eventually. As I was not able to do much DMing thereafter, that never happened…

So, Kuntz, being a bit of a jerk, seems to have been a major part of the reason that Gygax didn’t continue developing The Temple of Elemental Evil and module T2 never came to fruition.

In mid-1975, Gygax became TSR’s first full-time employee. Dungeons and Dragons and other TSR products were requiring more and more of his efforts, which left him less time for running and designing material. Quite possibly due to Kuntz ruining his Hommlet and Temple development, Gygax chose to spend his limited design time elsewhere.

As I mentioned in the prior post, The Village of Hommlet was released in 1979, but The Temple of Elemental Evil did not follow. At least, not until Gygax, previously exiled to the west coast as a minority shareholder, returned to headquarters in 1984 and executed a Board of Directors coup d’etat. Then, desperate to put out new product to shore up cash flow, Gygax turned his notes for The Temple over to Frank Mentzer and T1-4, The Temple of Elemental Evil, was released in 1985.

FINALLY, hardy adventurers could finally move on from the moat house and clear out the Temple ruins.

Monte Cooke’s Return to the Temple of Elemental Evil took place fifteen years after the brave adventurers had crushed the Temple. Released in 2001 for 3rd Edition D&D, it was certainly hefty, coming in at around 200 pages.

Our previous coverage of The Temple of Elemental Evil includes:

And the Temple of Elemental Evil board game:

You can read Bob Byrne’s ‘The Public Life of Sherlock Holmes’ column here at Black Gate every Monday morning. And he is a frequent contributor to the ‘Modular’ series.

Ever read the novelization of this module?

James – I haven’t read any of those novelizations, though I read quite a few Dragonlance, Forgotten Realms, Ravenloft and Gord the Rogue novels.

I never played the ToEE PC game, either.

I can’t remember if I read this one, but I read several of the others. And though they weren’t the greatest reads, I found them to fairly enjoyable due to their nostalgic appeal. They reminded me of the game sessions when I first went through these modules.

I read Ru Emerson’s Against the Giants, and it was… okay. A decent nostaligia fest. But the first six chapters were dedicated to The Steading, the next three to The Glacial Rift, and The Hall of the Fire Giants was wrapped up in maybe a chapter and a half. The close of the book was very obviously rushed, and most of the detail of that final great adventure was glossed over.

By the last chapter Fire Giants were being killed off like flies in combat, too. There was very ittle sense of how frightening these monsters were when even young farm boys were knocking them off two and three at a time.

I looked at the whole Greyhawl Classic series a while back: