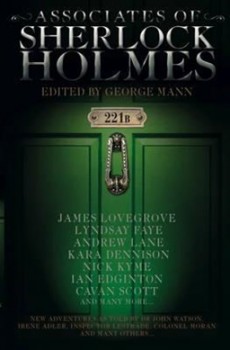 Last week I wrote about two Titan Books novels from James Lovegrove. I mentioned that there are two distinct lines of Holmes pastiches from Titan (actually, there are other books that don’t fall in either category, such as Kareem Abdul Jabaar’s Mycroft Holmes novel). The Further Adventures of Sherlock Holmes started as reprints and added new books into the mix and are generally more traditional stories.

The other features more elements of horror, steampunk and/or the supernatural and George Mann’s two novels are part of this line. He has also edited three anthologies for Titan, including a neat little book called The Associates of Sherlock Holmes.

Associates includes thirteen stories; all focusing on a character found in one of Doyle’s sixty original Holmes tales. It’s a neat idea and there are some interesting and creative stories in the mix. The aforementioned Lovegrove’s “Pure Swank” tells us the real story about Barker, Holmes’ ‘hated rival upon the Surrey shore,’ going back to when he was an Irregular.

Hugo Award winner Tim Pratt’s “Heavy Game of the Pacific Northwest” takes Colonel Sebastian Moran to the state of Washington in 1892 to hunt what seems to be Big Foot. It’s a good hunting story that paints quite a portrait of the amoral Moran.

Ian Edington’s “The Case of the Previous Tenant” brings the best of the official force, Surry’s Inspector Baynes, to London. A Viking sword and some borrowing from “The Devil’s Foot” make for a fun read.

A game that I enjoy is to play “What happened to…?” characters after their encounters with Holmes. Jonathon Barnes’ “The Presbury Papers” does just that with the central character from “The Crooked Man.” Sadly, a leopard does not change its spots.

Nick Kyme’s “Peeler” is easily the most disturbing story of the bunch, but it’s also a pretty good one, giving us a first-person account from Inspector Lestrade. Probably because I’m not a genius, I’ve always identified more with the likes of Lestrade and Inspector Cramer than with Sherlock Holmes and Nero Wolfe. 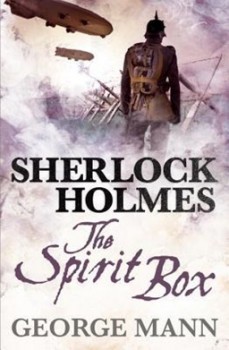 Mann has written two Holmes pastiches, of which I have read The Spirit Box. It takes place in 1915 and German zeppelins are raining down death and destruction on London. Mycroft summons Holmes from his Sussex retirement home to look into three deaths. With Watson at his side, they strive to keep the enemy from finding the mysterious ‘spirit box.’

This is a crossover, bringing in the main characters from Mann’s ‘Newbury and Hobbes’ series, which is Victorian steampunk. Sir Maurice Newbury is a gentleman adventurer for the crown and Miss Veronica Hobbs is his beautiful young assistant and they have non-Holmesian adventures. Holmes does not approve of Newbury, who has a much broader view of the possible than the great detective entertains.

I first encountered Newbury and Hobbs in “The Case of The Nightcrawler,” a short story included in The Encounters of Sherlock Holmes, edited by Mann. Watson is referred (somewhat disparagingly) to Newbury by Holmes, who is more of a minor character in this tale. But we do get a pretty good look at Newbury in that one and a lot of Watson.

In The Spirit Box, Holmes, Watson and Newbury are investigating a house when a zeppelin raid occurs. I’ve read a lot about World War II and The Battle of Britain was a favorite subject area years ago. I never thought about that sort of thing in World War I and I think this is the best part of Mann’s book. There’s a real depth to living through that horrific time.

Seaton Underwood is taking pictures that are said to capture men’s’ souls. You can imagine what Holmes thinks of that! But there is far more going on and with help from Newbury, Holmes and Watson infiltrate the high society that seems to be at the heart of the matter.

Obviously, we are getting an older Holmes and Watson, rallying to the cause one more time. I think Mann does a nice job of writing the elderly Watson. And the war setting gives Mann a lot of room to move around, which he takes advantage of. This is a good book.

I have just started his other Holmes novel, The Will of the Dead, which looks to be more in his steampunk vein. Mann also edited another Titan anthology, The Further Encounters of Sherlock Holmes, though he does not have a story in that one.

I have not read any of the non-Holmes Newbury stories, though there are about two dozen of them. I wouldn’t be surprised to see more crossovers with Holmes.