Just a short post this week, since I’m sure we all want to get back to our holiday celebrations.

And speaking of which, I’m sure that everyone who remembers The Lion, the Witch, and the Wardrobe as well as I do knows where today’s title comes from. The first time that Lucy finds herself in in Narnia, she meets Tumnus the faun, who tells her that because of the power of the White Queen, in Narnia it’s always winter, but never Christmas. 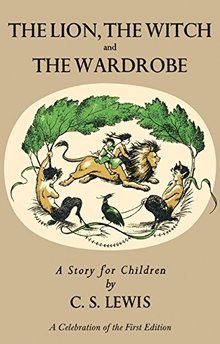 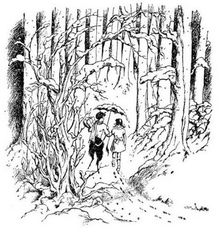 I know that when I first read the book as a child, I fully agreed with Tumnus that this was a tragedy of epic proportions, and I was more than a little relieved when, later in the narrative, Father Christmas appears with presents for the children, and their allies, Mr. and Mrs. Beaver.

So focused was I on this happy circumstance, that it didn’t occur to me until I was in university and writing a paper comparing The Chronicles of Narnia with The Hobbit as literature for children, that Narnia was not a Christian culture.

In other words, there would be no Christ, and therefore no Christmas, and further, no Father Christmas. Whether it was winter or not.

It’s true that the Chronicles are a Christian allegory – if Aslan isn’t a Christ figure, he’s not even a lion – but however strong the allegory, it still doesn’t give Narnia Christianity. We can’t even say that Father Christmas appears because of the children, since the Beavers are obviously well-acquainted with him, and receive gifts as well.

So does this mean that CS Lewis made a mistake? Well, yes. I think so. Maybe he didn’t know at first that he was going to write a series. Or maybe he did it on purpose, knowing that it would capture the imagination of the young audience the books were intended for.

In any case, we do have Christmas, and whether you’re a Christian or not, I wish you strength and length of days.

I’m not a Lewis scholar, but his book The Discarded Image, which is a discussion of the medieval worldview, claims that medievalists, such as Dante, weren’t incredibly concerned with being consistent in their writings, at least in any sort of modern sense of consistency. Rather, medievalists tended to subsume all of their sources together (classical and Christian) into a big hodgepodge or tapestry. Since Lewis was a medieval scholar, I’m assuming that he was doing something similar in his Narnia books. He wasn’t really concerned with inconsistencies.

In recent years Michael Ward’s Planet Narnia has put forward an incredibly interesting and insightful interpretation of the Narnia books into something of a coherent picture. Though it’s made quite the rage in Lewis scholarship, I haven’t read the book. It would be interesting to see how he understands the presence of Father Christmas in The Lion, the Witch, and the Wardrobe.

Or, Lewis just made a mistake. Thanks for the post!

Interesting topic, and a fun one to bring up at this time of year!

I am a Lewis scholar, and I’ll say that James is spot on in the first paragraph of his comment above. Lewis was creating a total hodgepodge with Narnia (which, incidentally, drove his friend Tolkien crazy — it is why Tolkien, a fan of much of Lewis’s other work, never could embrace the Narnia books and indignantly dismissed them).

If, for fun, we’re trying to think of some kind of retcon solution to the problem, I’ll suggest this: the Father Christmas figure who visits Narnia is one of a few characters who can travel between multiple worlds of Lewis’s cosmos, and he is an embodiment of something more general (and more universal) than the physical birth of Christ in our world. He is the spirit of Winter Solstice, the Portent Bearer that Winter’s death is not the end and that Spring will come.

(In that interpretation, the quibble would still remain with the actual use of the word “Christmas” in his title, since etymologically it is tied to a specific historical figure of Earth. Unlessss… (This is fun!) Father Christmas’s most defining moment was his role as Bearer of Gifts on Earth, so that became the name most associated with him and that was “ported” with him to other worlds he visits. The animals of Narnia, then, would know him as Father Christmas despite having no idea what “Christmas” means. For them it’s a pagan celebration of the Winter Solstice, but Father Christmas showed up and started calling it Christmas so it became known as Christmas.

Anyway, yes, I don’t think Lewis thought through any of that. Tolkien, otoh, would have.

James: Now that you remind me, I think Lewis also said something of the kind in his book analysing Paradise Lost (the name of which I no longer remember).

Nick: I LOVE this. it fits in exactly with an explanation I was toying with, and just couldn’t get to hold together. Thanks for showing me the way.

My take: the Chronicles are not a Christian allegory, and Aslan is not a Christ figure. As a character, Aslan is literally Christ, that is, the Second Person of the Trinity.

I agree that Lewis wasn’t all that concerned with making things consistent. However, if he were called on to explain the presence of Christmas in Narnia, I think he would say something to the effect that the Incarnation is not a mere historical event, but something that transcends time and space and produces echoes even in other worlds (cf. Rv 13:8, “the lamb slain from the foundation of the earth”). I think his other writings would bear this view out.

OTOH, if we’re retconning, wouldn’t the first royal family of Narnia, who came from London, have imported Christmas?

To Raphael: I see what you’re getting at and it’s absolutely a viable alternative/explanation. The idea that the original monarchs (Frank and Helen?)were British and therefore would have brought the concept of Christmas with them is all that’s needed, as far as I’m concerned.
If we then combine your ideas of events transcending time and space, with Nick’s idea of Father Christmas “porting” to other worlds, I think we’ve got everything covered.

Watching the movie with my kids, all I could think was: “OMG Father Xmas is handing out the medieval equivalent of AK47s TO CHILDREN so they can be CHILD SOLDIERS!”