Drake, the first novel in Peter McLean’s new series, was published in January. The highly-anticipated second novel, Dominion, will be released on November 2nd in the US, and November 4 in the UK and the rest of the world. Here’s what I said about Drake late last year.

Peter McLean’s first novel will be released in paperback by Angry Robot in early January, and it sounds pretty darn good.

Don’t believe me? Drake features a hitman who owes a gambling debt to a demon, his faithful magical accomplice The Burned Man (an imprisoned archdemon), the Furies of Greek myth, an (almost) fallen angel named Trixie, and oh, yeah. Lucifer. Dave Hutchinson calls it “a gritty, grungy, funny, sweary noir thriller with added demons. Don Drake is a wonderful creation.” I told you it sounded good. Drake is the opening installment in a new series titled The Burned Man.

Black Gate is very proud to present an exclusive cover reveal for the third novel, Damnation, scheduled to appear on May 2 of next year. See below for additional details of the book, and a high-res pic of the cover.

He’s living rough in a sink estate on the outskirts of Edinburgh, doing cheap spells for even cheaper customers while fending off the local lowlifes. Six months ago, Don fled from London to Glasgow to track down his old girlfriend Debbie the alchemist.

With the Burned Man gradually driving him mad, Don meets with an ancient and mysterious tramp-slash-magician, with disastrous consequences. Now his old accomplices must step in to save Don from himself, before he damns himself for good this time.

And here’s that cover we promised you. 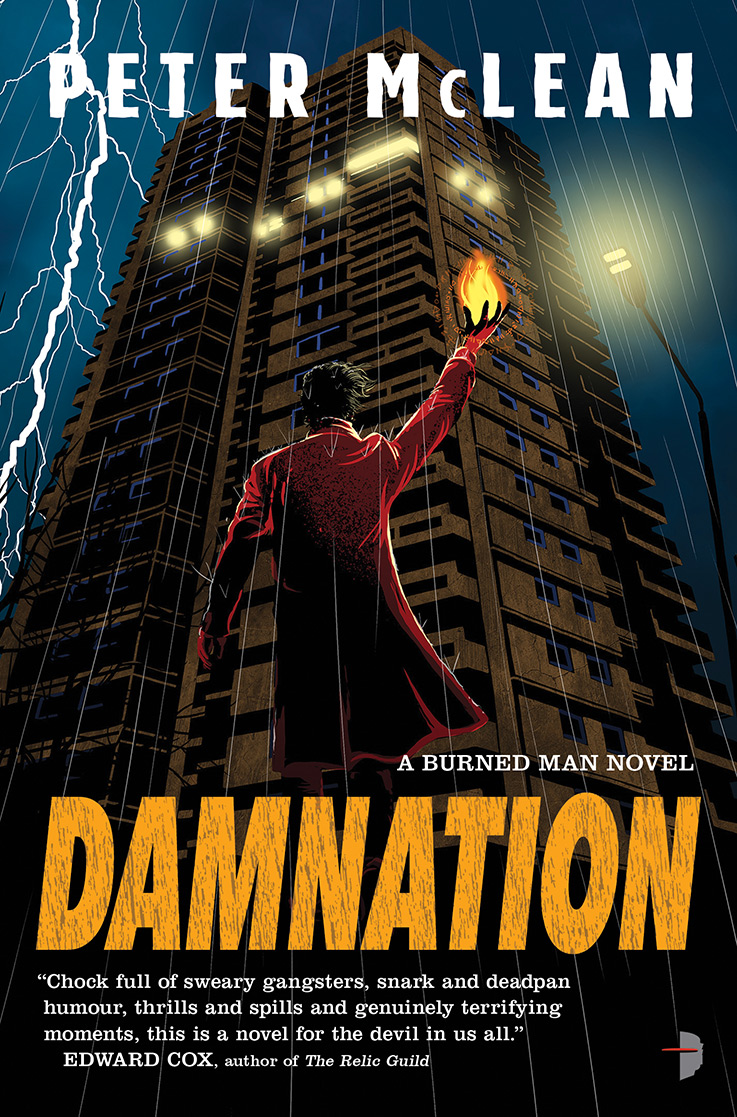 And here’s what we know about Peter McLean.

Peter McLean was born near London in 1972, the son of a bank manager and an English teacher. He went to school in the shadow of Norwich Cathedral where he spent most of his time making up stories. By the time he left school this was probably the thing he was best at, alongside the Taoist kung fu he had begun studying since the age of 13.

He grew up in the Norwich alternative scene, alternating dingy nightclubs with studying martial arts and practical magic.

He has since grown up a bit, if not a lot, and now works in corporate datacentre outsourcing for a major American multinational company. He is married to Diane and is still making up stories.