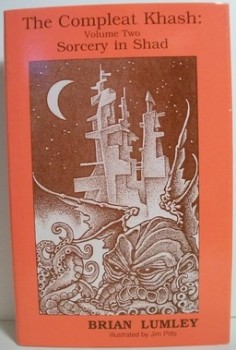 All good things must come to an end. I get that, and as I’ve gotten older I appreciate that more than ever. However, they do not all have to end badly. Sometimes, though, as with Brian Lumley’s Primal Lands stories, they do. Despite some rough-hewn edges and some too-purple prose, I completely enjoyed the first two collections in the series, The House of Cthulhu and Tarra Khash: Hrossak! (follow the links to my Black Gate reviews). I looked forward to the culmination of these tales in the final volume, Sorcery in Shad (1991). Unfortunately, it’s a bit of a flop. Only Lumley’s easy-going style, colorful world-building, and a clear love for his characters kept its reading from being drudge work.

Lumley is a controversial figure in the world of Lovecraft Mythos fiction. By inclination, he is a writer of action and adventure. What he brought to Mythos stories were heroes who fought back, unwilling to acquiesce in the face of existential dread (and monsters), which didn’t always work very well.

It served him splendidly here, though, in his stories set on Theem’hdra, the continent-sized remnant of a gigantic volcano, in the earliest days of Man on Earth. House of Cthulhu introduced the setting and several recurring characters, most notably the sorcerer, Teh Atht, through a series of mostly independent short stories. Tarra Khash, through several linked stories, told the escapades of its titular good-hearted barbarian wanderer. By the end, Tarra Khash and his friends had saved the world from demonic domination and he had decided to head back home.

Instead of another collection of stories, Sorcery in Shad is a novel. The major characters from the preceding two books are brought back, their fates now intertwined. Once again, the fate of the whole world is at stake. This time Lovecraft’s cosmic bugaboos, the Great Old Ones themselves, are set to return to Earth and create:

“A future world where men were no more — a world cleared off of the entire human race — where Man’s cities lay crumbling in vast red blighted deserts. And rising in the distance, the twisted spires and turrets of cities vast and grey and terrible, mighty windowless mausoleums, and mad, cyclopean statuaries whose very angles defied Yoppaloth’s eye to fathom their true shapes and perpsectives. 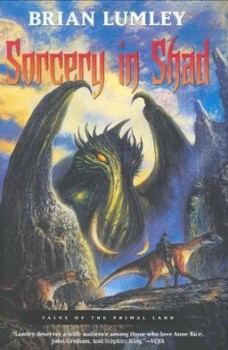 The story is made up of four strands that come together in an admittedly bravura piece of stage plotting. The first one concerns wizard Teh Atht trying to find Tarra Khash. A series regular, the scorpion god, Ahorra Izz, has told the wizard that he needs the barbarian in order to find the answer to becoming immortal. But Tarra has been captured by a band of slavers in service to the nefarious Black Yoppaloth, an immortal and monumentally evil necromancer. He and a coffle of slaves are being forced toward the dark ziggurat of Yibb-Tstll on a distant island. Meanwhile, the lamia Orbiquita prepares to jettison her monsterhood and become a woman, for the love of Tarra Khash. Finally, when informed of Tarra’s imprisonment, the elfin Amyr Arn sets out to rescue him.

Unfortunately, Sorcery in Shad is littered with a jumble of retold exploits from the previous book. Each time one character meets another, they, and we, must hear about what happened last time around. The first part of the book quickly bogs down, exactly when it should be grabbing you and running.

The four storylines weave together clumsily and jerk the reader back and forth. Each new event feels too random. While Sorcery is supposed to be a novel, it never really feels like a cohesive whole.

Amidst the weaknesses there are still good bits. Lumley is too colorful and creative a writer to fall down on the job completely. From the aforementioned scorpion god, to the Council of the Lamias, to Black Yoppaloth’s terrible, secret history, the book is filled with wonderful images.

There are also several passages of mordant humor. My favorite concerns the results of several wizards’ failed attempts to achieve immortality. One sorcerer was simply “eaten by a slime,” while another might have actually found immortality, just not in this world, for “Essence-sniffing spells had failed to detect” the tiniest trace of him. Others ended up in similar straits:

Phaithor Ulm, doubtless hot on the trail of personal perpetuity, had necromantically examined intelligences which, disgruntled, had given him false information — by use of which he’d rendered himself as a handful of green dust. The pitfalls were many.

Lumley’s slow reveal of what’s going on, beyond a simple mission to rescue Tarra Khash, would be more enjoyable if the book didn’t feel padded. I’m not sure how many pages are spent rehashing what happened in the last book, but it feels like a lot.

After all the introductions and reintroductions, Sorcery does build up a stronger head of steam. There isn’t a whole lot of action before the mutant-filled finale, but it’s okay. The machinations of Teh Atht, Amyr Arn, and Orbiquita to reach Tarra Khash are well done, involving powerful magics, monsters, and even a god. There’s not a whole lot of depth to these characters, but Lumley generated enough empathy for them in the prior books. It’s fun to watch them in action.

Tarra Khash, prisoner to a seemingly invincible sorcerer, is given little to do. Instead, he ends up serving as a mechanism for Lumley to provide his readers insight into the villain, Black Yoppaloth. The latter proves the most interesting character in Sorcery. For a book that is generally light in tone, his origin is nightmarish. His evil deeds, if not justified, are understandable. Still, the character’s not enough to entirely rescue the book from its plodding qualities.

Here’s the thing — it’s not a terrible book. Lumley hasn’t sold millions of books by accident. He knows how to build tension and not release it until the perfect moment. He writes in clean, simple prose that doesn’t bog down under too many faux-archaisms or illogical plot developments. No matter that I was disappointed with much of the book, it never hurt me to read it (unlike some Lin Carter books).

If you’ve read the previous books, especially Tarra Khash, you should read Sorcery in Shad. Despite its flaws, it brings Tarra Khash and his companions’ stories to a well-earned and satisfactory end. If you haven’t read the first two books, and you have a yen for some solid S&S, then give them a go.

I still miss my — was it Owlswick or Ganley? — Lumley hardcovers; the illustrations were great, even if the books looked like they’d been typset on a typewriter.

Paul Ganley published all those cool-covered Lumley books.
I wrote a post on a bunch of them some time ago

(I’m pretty sure I ordered them after seeing ads in the Terminus Weird Tales? And the ones I had weren’t really hardcovers — more like trade paperbacks with heavy dustjackets or something.)

I love Lumley’s books. They can plod along at times, but they’re still a lot of fun. I also like his take on the Lovecraft mythos. I wish more books and stories milking the Lovecraft teet would taking things in new directions the way Lumley does.