When I was twelve years old I read a book that changed my life. It was Before the Golden Age, a collection of Isaac Asimov’s favorite pulp tales from his own early teen years, and it inspired in me a love of the pulps that endures to this day.

One of the most captivating stories was John W. Campbell’s “The Brain Stealers of Mars,” from the December 1936 Thrilling Wonder Stories. The intrepid explorers Penton and Blake use an atomic-powered craft to visit Mars, where they find a sinister race of shapeshifters, eager to hitch a ride back to Earth. Sort of a prototype for “Who Goes There?”, the far more famous tale which Campbell published two years later in Astounding, “Brain Stealers” is more a science fiction puzzler than a true horror story, as our blaster-wielding heroes must find a way to outsmart an entire race of scheming telepathic shapeshifters with designs on conquest.

The Planeteers is a collection of five Penton & Blake tales published in Thrilling Wonder between 1936-38, following their adventures as they explore the solar system in their gleaming atomic spacecraft, discovering the double-minded aliens of Callisto, a benign race on Europa, and the super-intelligent energy eater out beyond Pluto. It appeared as half of an Ace Double in 1966, paired with The Ultimate Weapon, a standalone tale of the desperate race against time to create super-weapons on the Moon to thwart an alien invasion.

Rich Horton reviewed both books on his blog Strange at Ecbatan back in June. Here’s what he thought. 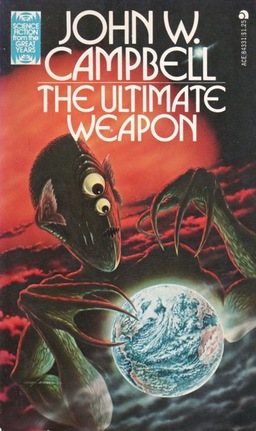 The Ultimate Machine is actually a longish novella… It opens with an Earth scout ship out near Pluto, where they detect an alien ship with very powerful weapons, that easily overwhelms the mines on Pluto and destroys a couple of ships. Buck Kendall, a rich man and great scientist/engineer who has enlisted in the Space Navy, is one who escapes, and he immediately raises the alert. But his Navy bosses ignore him, brushing off what he saw as human space pirates, so he resigns, goes back to private industry, and arranges for some funding from the only smart man in the Navy, Commander McLaurin, to set up a lab on the Moon and start working on better weapons. He has deduced that the aliens are from Mira, and that they will be back at Earth in two years…

Kendall and his cohorts put together some amazing new weapons and ships in an impossibly short time — the aliens return and are surprised at the resistance they find, but they still seem likely to prevail, until Kendall figures out a way to use the Uncertainty Theory as the Ultimate Weapon…

All that said, I liked a fair amount of the story. Except for the stupidity about the Uncertainty Theory, the scientific inventions are at least on the border of plausibility (well, across the border, but at least backed by actual 1930s physics) — Campbell mentions, for example, a weapon much like the neutron bomb. You can kind of see him working the direction he would ask his authors to take at Astounding.

The Ultimate Machine was re-issued ten years later as a standalone paperback as part of Ace’s Science Fiction From the Great Years line, with a new cover by Alex Ebel (right.)

Science Fiction From the Great Years was an interesting Ace experiment in reprinting pulp fiction by Campbell, Murray Leinster, Fletcher Pratt, “Doc” Smith, Ray Cummings, and others. It was edited by Fred Pohl and lasted for fifteen titles. We covered the whole series last year:

Here’s Rich on The Planeteers.

The Planeteers is a collection of 5 stories… Penton and Blake have invented atomic power, which is illegal on Earth. (Due to an accident that took out 300 square miles of Europe.) Exiled, they fly their atomic powered ship, which no on can match, all over the Solar System, looking to get rich. They keep encountering strange and intelligent aliens who always turn out to have their own interests that run counter to Penton and Blake’s. Penton is the smart guy, Blake the foil.

In “Brain Stealers of Mars,” they encounter creatures on Mars that can exactly mimic other creatures, and end up having to decide which of a dozen or so copies of Penton and Blake are the true ones. In “The Double Minds,” a race on Callisto that has learned to use the two halves of their brain separately, increasing their mind power but reducing their coordination, has enslaved another Callistan race. Penton and Blake help out the revolution, with unexpected consequences. In “The Immortality Seekers,” set on Europa, a fairly benign race turns out to need the Beryllium from which Penton and Blake’s ship is made to assist what seems to be nanotech in making them immortal. Another clever creature is enlisted to help Penton and Blake. Then they head out beyond Pluto, to the Tenth World, very cold but inhabited by a very intelligent energy eater that can’t control its urges to grab energy from anything hotter. Finally, on the moon of the Tenth World, surprisingly warm compared to its primary!, they encounter a creature that can eat almost anything.

The Ultimate Weapon/The Planeteers was published by Ace Books in 1966. It is 106+150 pages, priced at 50 cents. The covers were by Gerald McConnell and Jack Gaughan, respectively. 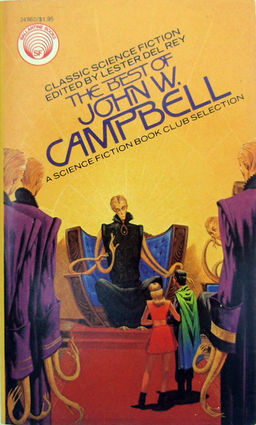 And our recent coverage of Ace Doubles includes:

Space Barbarians and Uranium Mining on Mars: Rich Horton on Empire of the Atom by A. E. Van Vogt and Space Station #1 by Frank Belknap Long
Dorsai and Secret Psi Powers: Rich Horton on The Genetic General/Time to Teleport by Gordon R. Dickson
Space Stations With Secret Passages, and Snow White in Space: Rich Horton on Sanctuary in the Sky by John Brunner/The Secret Martians by John Sharkey
Parallel Universes and Space Marines: Rich Horton on The Games of Neith by Margaret St. Clair/The Earth Gods are Coming by Kenneth Bulmer
The Problem With Marion Zimmer Bradley: Rich Horton on Falcons of Narabedla/The Dark Intruder
King of the Fourth Planet/Cosmic Checkmate by Robert Moore Williams and Charles V. De Vet & Katherine MacLean
Our Man in Space/Ultimatum in 2050 A.D. by by Bruce Ronald and Jack Sharkey
Rocannon’s World/The Kar-Chee Reign by Ursula K. LeGuin and Avram Davidson.
The Plot Against Earth/Recruit for Andromeda by Calvin M. Knox and Milton Lesser
Warlord of Kor/The Star Wasps by Terry Carr and Robert Moore Williams
The Sun Saboteurs/The Light of Lilith by Damon Knight and G. McDonald Wallis
Wandl the Invader/I Speak For Earth by Ray Cummings and Keith Woodcott (John Brunner)
The Sioux Spaceman/ And Then the Town Took Off by Andre Norton and Richard Wilson

I read The Ultimate Weapon a year or two ago. You have to have a special taste for this king of thing – sentences and characters so stiff and inflexible that you could jimmy a door with them. Not that there’s anything wrong with that…

That sounds about right. Speaking from personal experience, it helps to be 12 years old. 🙂

Before the Golden Age is one of my all-time favorite anthologies. Even the autobiographical parts are fascinating. Also, it’s nice to see Campbell recognized as a writer. His brilliant work editing Astounding/Analog tends to make most fans forget he was also a popular writer. Actually 2 popular writers, since Don A. Stuart was intended not just as a pen name, but a completely separate persona.

Glad to hear you loved BtGA as much as I did, Amy! It’s been out of print since the 70s, and I wish there was a digital version available for modern readers.

Blogger Johnny Pez started a project to create a virtual edition of Before the Golden Age, linking to all those stories that were now available online, including Edmond Hamilton’s “The Man Who Evolved” and the marvelous “Tumithak of the Corridors.”

However, that list isn’t as up-to-date as it could be.