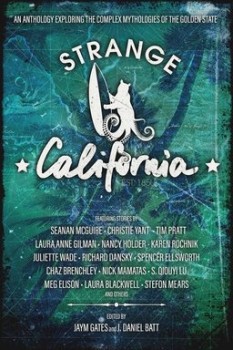 Southern California exists on borrowed life. Four hundred miles of water, sucked from the Sierra Nevada into a river of steel and rebar and concrete. It plows through hot basins of Joshua trees, up barren hills dusted with scrub oaks, through sunblasted pumping stations that roil and hiss. It traces a line along the edge of Lancaster, California, springing tract homes and strip malls, green lawns and chlorine-wet children. It is a thing that does not belong, and like all such things, there is an old story at its heart.
~  Five Tales of the Aqueduct, By Spencer Ellsworth

I have a few distinct childhood memories: racing through my great-grandfather’s orange groves on his retired cowponies with my cousins; attending a funeral for the son of my grandfather’s clients, Mexican ranchers from Monterey, after the man was gunned down by an LA gang; the colors and scents of San Francisco’s Chinatown; learning how to avoid stumbling over cartel drug fields; the effigy hanging over Main Street, celebrating my hometown’s violent judicial past; visiting my uncle, who was employed as an electrical engineer on the Predators. A mélange of cultures and histories, the weird and illegal and far-future all mixed into that wild, weird empire-state known as California.

It’s no wonder that California is the land of science fiction and weird fantasy. There’s a little bit of everything there, all mixed together and blurring together, and where the lines cross, it can get weird. One of my favorite authors, Clark Ashton Smith, wrote about my hometown, referencing El Dorado moonshine and the Placerville Bank. He corresponded with H.P. Lovecraft, the masters of Eastern and Western Weird frequently mingling their tales and sharing characters and mythologies.

And that’s just one example. A small sample of founding SF authors from, inspired by, or living in California includes Bradbury, Le Guin, Dick, Vance, Gibson, Powers, and Heinlein. The state still inspires many authors and series, and Silicon Valley itself is like something out of a science fiction novel.

Travel farther north, where I grew up, and it’s horror that perhaps feels most relevant. The Sacramento Valley is noted for having produced more serial killers and mass murderers than is in any way normal, and the hills are full of ghosts — nearly every old building in my hometown is said to have at least one ghost or paranormal entity.

The Wild West isn’t dead here, either. Many members of my family made their living with horses or cows, and my great-grandparents ran cattle in the high meadows of Yosemite. It isn’t uncommon to spot a vaquero rounding up cattle on the hills, and rodeos are a social outing. There’s even a homeless man who lives off the land with his small herd of horses, and often tethers them in front of Starbucks when he rides into town — they’re perfectly mannered, even the young ones! When fires sweep through the area, the ranchers saddle the horses and ride into the mountains to save the cattle. Placerville is still home to the world championships of gold panning.

When I started reading SFF as a teenager, it seemed almost familiar. Reading Clark Ashton Smith and other California authors, I knew the places that inspired them, that shaped their settings. Science fiction and fantasy were the language of my home.

Which brings me to now. I wanted to pay homage to the vibrant tapestry of influences that gave me my start in science fiction and fantasy. I had the chance to discuss my idea with my friend and fellow editor, Jason Batt, and we came up with the idea of Strange California, an anthology celebrating the weirdness we grew up with. 26 authors, several artists, an amazing support team, and a publisher later, we’re on Kickstarter, funding that homage.

But why would you care, if you’re not from California? Because California’s contributions to SFF are not a thing of the distant past. While writers like Kim Stanley Robinson, David Brin, Seanan McGuire, and Paolo Bacigalupi are established names in the industry, there are dozens of incredibly talented authors who are either just breaking into the field, or who have been quietly producing incredible fiction on their own for years.

Slate — California Is the Future — By Kristin Miller

Gizmodo — The True Literature of California Is Science Fiction

Jaym Gates got her start in editing by making a joke on Twitter six years ago. At the time of writing this bio, she’s working on her 15th anthology. The titles include Rigor Amortis, Broken Time Blues, War Stories, Geek Love, Genius Loci, Strange California, Upside Down, Invisible Women, Legends of Strategy: How Star Wars Explains Future Strategy, Eclipse Phase: After the Fall, Exalted: Tales from the Age of Sorrows, and Vampire: Endless Ages. She is also a developmental editor for Falstaff Books, and lead editor for the Broken Cities shared-world setting.

Along the way, she’s managed to publish fiction, RPGs, comics, nonfiction, and academic nonfiction. Her fiction has appeared in Aether Age, Kaiju Rising: Heroes!, Goldfish Grimm, and Grendelsong, and her nonfiction appears in various academic and online outlets. She has a collection of short fiction coming out from Falstaff Books, titled Shattered Queen. She has written for Firefly: Smuggler’s Guide to the Rim, Blue Rose 2nd Ed., Tianxia: Blood, Silk, and Jade, and other RPGs.

In her spare time, Jaym trains and rides horses, collects tea, practices a martial art called Systema, and works in a comic shop in Everett, WA. Her last article for Black Gate was The Future of the Magazine of the Future: On the Return of the SFWA Bulletin.