I think the statute of limitations on spoilers has probably run out 22 years after this movie was released… but be advised that there’s a sort of big spoiler ahead.

I suppose I should also mention that I was a TOS guy back in the day and didn’t even get around to watching the other Star Trek series until about a decade ago. I ended up liking The Next Generation well enough, although oddly it always seemed to me that it might have been more dated than its predecessor. But that’s neither here nor there.

What I’m getting around to, perhaps awkwardly, is that even though I’m mostly a TOS fan, I thought that six TOS movies were enough and perhaps even a bit too much, and it was probably a good time to switch things up a bit. But not before some TOS crew members appear on the scene, early on in this movie. 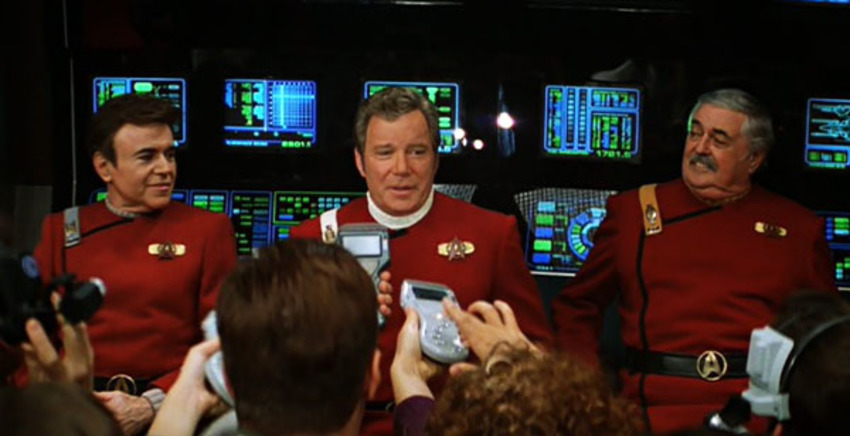 That would be Kirk, Scotty and Chekhov, who are attending the rollout of a new ship — the Enterprise-B. Which must be dull stuff for guys who have dealt with green-skinned alien space babes, Khan, and Tribbles, just to name a few.

This routine maiden voyage soon turns into an actual mission and Kirk does one of those time-honored Star Trek moves of crawling through a heating duct or whatever and fiddles and tinkers to eventually save the ship — or at least part of it. Unfortunately, the other part of the ship is blown away and Kirk along with it.

Jump forward nearly a century to The Next Generation time frame, where most of the movie takes place. I could go into various plot points and whatnot but unfortunately it boils down to this — a mad scientist (Malcolm McDowell as Dr. Tolian Soran) intends to use his unobtainium (or whatever) to wipe out a solar system so that he can go back to Nexus — a region that is a paradise, of sorts.

It’s up to Next Gen crew — and look, there’s Kirk — to prevent all this. At no time do I recall McDowell cackling and rubbing his hands together, although I wouldn’t have been surprised if he had. All of this was somewhat diverting, as these things go, but it was just a little too white hat, black hat for me.

As for that spoiler, let’s just say that after it’s all said and done, Kirk doesn’t fare so well, after all .

William I. Lengeman III’s last article for us was Old Dark House Double Feature IV: Two Haunted Honeymoons. He holds forth at www.wileng3.com.

I actually think McDowell turns in a decent performance. I read an interview with him years later in which he professed taking the part without any real knowledge of Star Trek or SF in general, and that he was surprised by how much work he got as a result.